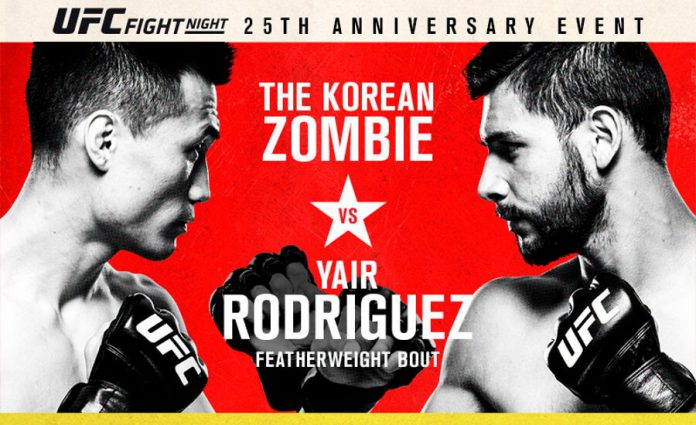 The MMA gods just won’t let us be spoiled. A few weeks ago, we were super pumped for a featherweight contender matchup between The Korean Zombie and former lightweight champion Frankie Edgar. That was a matchup between two Fight of the Year winners who both have fattened their pockets with gobs of post-fight bonus awards.

Instead, because of an injury to Frankie Edgar, we’re getting TKZ vs. El Pantera. As far as backup plans go, this isn’t so bad: these dudes are allergic to boring fights, and their willingness to go balls-to-the wall with creative strikes is guaranteed to produce some oh shi* moments.

Then you’ve got a welterweight banger between Donald Cerrone and Mike Perry. On paper, it’s a sick matchup between a kickboxing technician and a one-hitter quitter. But underneath that, there’s so. Much. Drama.

The TL;DR version of it is that Cowboy left Jackson-Wink, where he’s trained for more than 10 years, because Perry recently joined and Mike Winkeljohn refused Cerrone’s request for “Platinum” to train somewhere else for the fight. That led to a messy public breakup – and Cerrone’s blood has got to be boiling from the perceived slight.

We’ve also got Germaine de Randamie, whose claim to fame is being stripped of the inaugural women’s featherweight title. In a sport where ducking opponents is a cardinal sin, GDR pulled the ultimate duck move against Cris Cyborg – the only reason there’s a 145-pound class in the first place. Not only did she stall by claiming she was injured, she later said she wasn’t fighting Cyborg because of the Brazilian’s PEDs suspension.

The fans didn’t buy it, and neither did Dana White. Honestly, she would’ve made out better if she just said that she didn’t feel like getting her face mashed in by Cyborg. To package it into some kind of moral stand was just insulting. But despite the hate, she’s a top 135-pounder, and she gets to try and erase the ugly episode against Raquel Pennington, whose coming off a failed title bid.

Alright, that’s enough backstory for now. Let’s get into some bets! We’ve got UFC odds at BookMaker.eu listed here, and today we’re breaking down the best values.

Will the Zombie Feast?

The Zombie had to transition from training for a brilliant technical wrestle-boxer to a unpredictable striker. That can’t be easy, but at least he was already in camp: Rodriguez is taking this scrap on just a few weeks notice.

There are a lot of question marks for both fighters here: Is the Zombie still the same after suffering yet another major injury? Is Rodriguez damaged goods after taking the type of beating from Edgar that changes careers? In a five-rounder, whose cardio holds up better?

The good thing for Yair is that he shouldn’t have to worry too much about TKZ’s wrestling, so that opens up his usual assortment of Matrix-influenced strikes. This is a scrapper that spins, flies and in some cases even flips into his kicking arsenal. The Korean is one of the most dynamic offensive fighters at 145 pounds, but even he doesn’t attempt to pull some of the stuff that Rodriguez does.

Before we get into our pick, let me just clear one thing up. As a Korean-American, it makes me cringe to hear UFC play-by-play guys butcher The Korean Zombie’s real name. Chan Sung Jung is his full name, Chan Sung is his first name and Jung is his last name. Hearing Goldberg call him “Sung Jung” is the like the equivalent of me saying Nardo Dicaprio. I know it’s not the most intuitive thing to figure out, but you’d think a professional announcer would at least get some feedback before he starts calling a fight for millions of viewers. #endrant

Rodriguez is definitely a live ‘dog, especially since Jung is the type of guy that fights to the level of his opponents. In an expected kickboxing match, there’s definitely a good chance that he lands something crazy during one of the Zombie’s signature brawling moments. But when it comes to finding ways to win, it’s the Zombie who is far more experienced, against better competition.

Two fights ago, Perry’s then-girlfriend was his corner woman against prospect Max Griffin. Perry’s then-girlfriend is a tennis instructor who posts a lot of gym videos of herself doing squats – you know the type. During the fight, she was yelling out really helpful advice like “kick the knee” and “break the leg”. I’m not a fighter or a coach, but even I can deduce that it would help to have a corner person that, you know, actually knows something about fighting.

Ok I’ll stop. The point here is that Perry has to get better now that he’s training at a top gym with the likes of Jon Jones and Holly Holm. After all, he’s only 27 and you can’t teach killshot power. On top of that, you know for a fact Winkeljohn and the other Jackson-Wink fighters are feeding Perry everything they know about the former teammate that trained with them for over 10 years.

Everything seems to be against Cowboy here. Not only has he lost four of his last five, the 35-year old got his brains scrambled in two of them and is clearly past his prime. Still, it’s surprising to see Perry such a big favorite here. We understand that he’s a true one-punch machine gun and Cerrone’s chin is clearly faded. But he’s gotten outclassed by every advanced technical striker he’s faced, and “Platinum” isn’t one of those giant 170-pounders that Cowboy has problems with.

This has all the makings of a revenge fight for Cowboy. The guy is seriously pissed, and though there’s a risk he gets torched, overall he’s still a more skilled striker than Platinum. We’ll put a small bet on Cowboy, though just a few weeks ago the price was much better at +184 – signalling that most of the action has been on him.

I’m genuinely curious to see how GDR will be received – because it feels like I haven’t read one positive comment about the “Iron Lady” ever since she acted all surprised for being stripped of her title. She’s not really known, so maybe people have already forgotten about the whole episode, but I expect her to get showered with boos when she enters the octagon on Saturday.

But can Raquel Pennington satisfy all the haters? It’s gonna be tough. De Randamie is a former world champion kickboxer from the Netherlands, and any time you hear the words “kickboxer” and “Netherlands” in the same sentence you know the skills are legit. Pennington is gonna be outgunned on the feet, and I’m not so sure she’s got the wrestling to take down a fighter with 86% takedown defense.

We lean towards GDR’s crisp striking technique and grappling defense here. Pennington is good at gritty, ugly fights, but de Randamie is better at keeping scraps from getting to that point.

Even if Pennington gets battered (which is doubtful), she took heavy fire from Amanda Nunes for five rounds before the fight was stopped – just the second time she was topped in 15 fights. De Randamie has only been stopped twice in 10 pro fights.