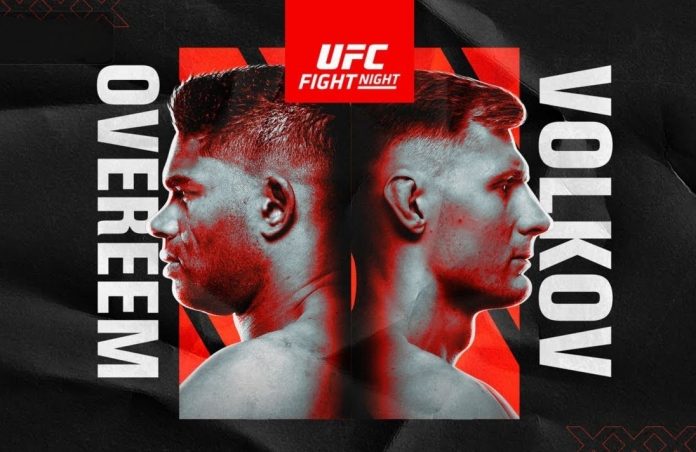 We don’t know what’s more incredible: the fact that Alistair Overeem is still fighting at 40 years old, or the fact that he’s still a legitimate top heavyweight after nearly 70 pro fights. What’s more, The Reem will be headlining his fifth straight card this Saturday when he meets No. 6 Alexander Volkov in Vegas. Despite the fact that he’s clearly on the downslope of his career, the UFC sees him as main event material, and fans will tune in to see The Demolition Man.

Overeem might be a top 5 guy right now, but you don’t have to dig deep to see how this could be a mirage. He’s 4-3 in his past seven, with losses against Francis Ngannou, Curtis Blaydes and Jairzinho Rozenstruik. During that time, his wins have come against the likes of Walt Harris, Sakai, Aleksei Oleinik and Sergei Pavlovic. Notice a trend there? All those losses came against top 5 fighters, and he was viciously KO’d in all three. In those victories, the highest ranked guy he beat was Aleksei Oleinik, who is a few big steps down in competition. If you wanna say his time as a serious title contender is done, I wouldn’t argue with you.

We can’t quite say the same for his opponent. Volkov will never accomplish what his opponent has (though to be fair Overeem’s resume is one of one), but he has far less miles on the odometer and is the more dangerous fighter right now. That’s why the UFC odds at BookMaker.eu opened with Volkov as a sizeable -187 favorite, despite being far lesser known than The Reem.

In the co-main event, Cory Sandhagen gets the opportunity to secure a title shot in a matchup against Frankie Edgar. Like Overeem, Edgar is an aging Hall of Famer mostly getting by on the strength of his name. A split decision win over Pedro Munhoz at bantamweight showed that he can still gut it out against solid fighters, but there’s little confidence in his chances against serious title contenders like Sandhagen. Because of that, Edgar is the biggest underdog on the car at +373.

It’s pretty much a two-fight card here, so let’s dig a little deeper on your best bets at the UFC online sportsbook. All UFC odds courtesy of BookMaker.eu. 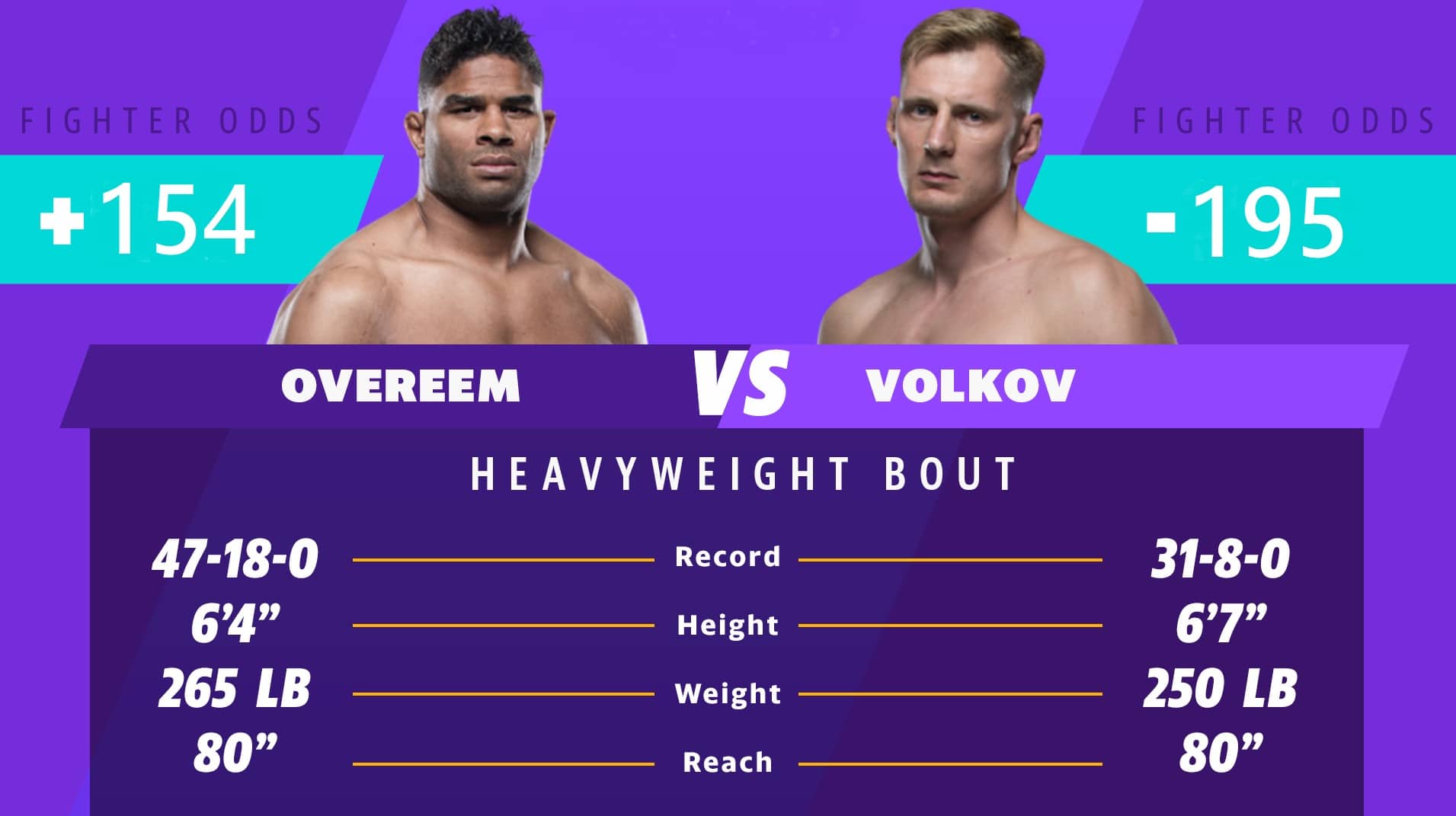 Bet It: Fight doesn’t go to decision as a parlay booster

You could get to this conclusion just by browsing Overeem’s Sherdog page. His last seven fights have ended before the bell, and in 66 pro MMA bouts he’s gone to decision just eight times. Nobody embodies the “any heavyweight can knock out any heavyweight” saying more than Overeem. He’s got the technique and power to turn out the lights, but his chin is so fragile that the tables can be turned on him. Volkov’s KO ratio might not blow anyone away, but any big dude who can punch can look like a killshot hitter against Overeem.

Maybe it’s my fondness for Overeem, but I can’t just bring myself to bet against him at this price. Volkov presents some real problems, mainly because he’s 6’7”, knows how to use his length and is a solid kickboxer. But he’s not the type of explosive athlete that Overeem really has trouble with. There’s a very real chance that Overeem locks Volkov up and wins the fight through the clinch. 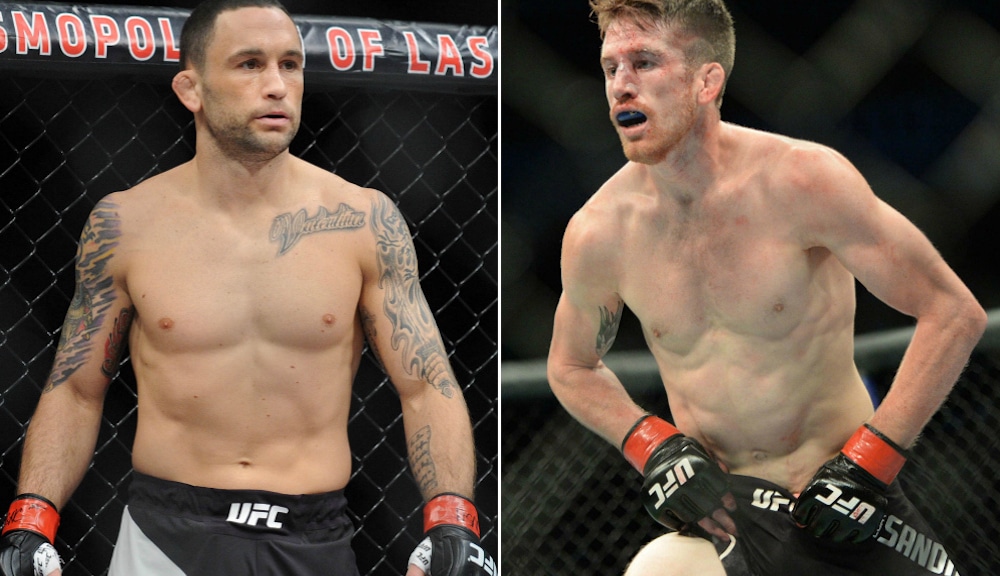 I love Frankie as much as the next guy, but we literally see zero path to victory here. The prime Frankie would have used his boxing and takedowns to win on points, but his physical decline takes away any advantage he might have had. On the feet, Sandhagen will be the faster dude with more damaging strikes. In the grappling exchanges, Sandhagen will be too strong and springy for Edgar to put and keep on the mat.

Bet It: Sandhagen inside the distance +175

When it rains, it pours. Sandhagen just went toe-to-toe with a monster in Marlon Moraes, and it ended with Moraes waking up wondering what the hell happened. Frankie was brutally knocked out in two of his last three losses, and in the other one he Max Holloway used him as a punching bag.

Sandhagen lands nearly 7 strikes a minute, and without having to worry about the takedown he’ll be able to take more risks than usual. At some point, he’s gonna buzz Frankie and follow up to find a finish.