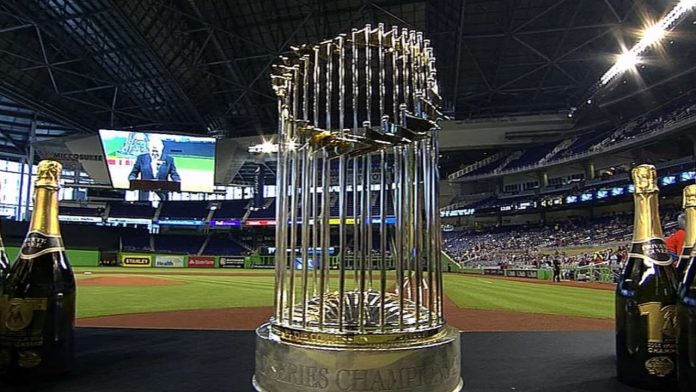 The field of 10 is set for the 2017 MLB playoffs. All of the fun starts on Tuesday night with the AL Wild Card Game between the Yankees and Twins, and it will continue through the final out of the World Series early in November. Below are the 10 teams and their individual odds to win the Fall Classic.

An unprecedented 21-game winning streak came at the right time in August and September for the Indians, and they’re absolutely full of confidence coming into the playoffs. They’ve wrapped up home field advantage throughout the AL side of the playoffs, and you can bet they aren’t going to squander that after winning 49 games at home this year.

The Dodgers might have won 104 games this season, but they also have a horrible postseason history working against them. This rotation still doesn’t feel all that solid after Clayton Kershaw, and it’s at the point that Dave Roberts is seriously considering throwing 20-year old Julio Arias to the wolves in Game 4 if this series gets that far.

It’s amazing to think that Houston had the best record in the AL when it picked up Justin Verlander at the waiver trading deadline for men to be available for the postseason, yet they still fell to the second favorites behind Cleveland to win the pennant.

What we learned last season is that you can never count out this Chicago outfit. Joe Maddon is going to make whatever creative decision he has to in order to figure out how to get this team to a second consecutive championship.

We would feel a lot better about the Nats if we knew darn well that Max Scherzer’s leg was alright heading into the postseason. We would feel even better if they had the same roster but weren’t called the Nationals. This franchise unbelievably hasn’t won a playoff series in three and a half decades.

The Red Sox feel like they haven’t quite put together the right pitching staff for this postseason run. Beyond Chris Sale, things get frighteningly bad, and that’s why they could be the longest shots on the board to win it all in the AL if the Yanks beat the Twins in the Wild Card Game.

The Bronx Bombers are scary right now. They’ve got one of the younger teams in baseball, yet they were able to win 91 games and easily capture a Wild Card berth. Should Luis Severino keep his head on straight in the Wild Card Game, the Yanks shouldn’t have any problems advancing to what would be a great series with Cleveland.

Zack Greinke pitched the Diamondbacks into a much better position this year than last season, but the real story is whether this bullpen is holding up in October. Do you really want your season coming down to whether Fernando Rodney and his 4.23 ERA can close out a game?

The Rockies were statistical overachievers this year, but they could be in for a nice run if they get a little lucky. They won 42 games in the NL West this season, including going 10-8 against the Dodgers (including a four-game sweep at Chavez Ravine just three weeks ago).

Baseball’s best feel-good story. The Twins won 59 games a year ago and turned it around by 26 wins this season to lock up the last playoff spot on the penultimate day of the season. Is this team overmatched? Sure, it is. Ervin Santana isn’t really a legitimate No. 1 starter, and Brandon Kintzler has never tried to close out a game anywhere near this big in his life. Yet the Twins aren’t going to just be chopped liver. They’ll be live in the Bronx on Tuesday night, even as +200 dogs.

Check out the latest MLB odds.