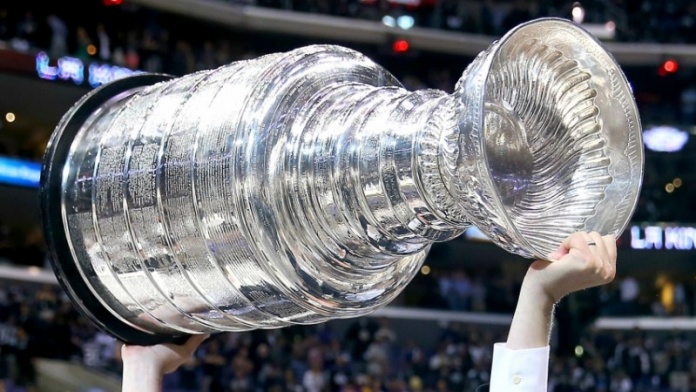 Who in NHL playoff predictions saw the San Jose Sharks and St. Louis Blues as the last two teams standing in the Western Conference Finals? Oh, put your hands down. You know you’re lying.

It’s been a wild first couple rounds of hockey in this year’s NHL playoff odds, chock full of overtime games, Game 7s and other phenomenal finishes, and we’re just getting started with four teams left fighting it out to win the Stanley Cup.

We’ll start out west, where the San Jose Sharks (+300 in the latest NHL lines) and the St. Louis Blues (+225) are set to engage in a series which already has the look of a seven-gamer.

The Blues have already been pushed to the brink twice, as they needed seven games to dismiss both the Chicago Blackhawks and the Dallas Stars. In both cases, Ken Hitchcock’s crew came up big when it needed to in the do-or-die spot.

For all of the flak Brian Elliot has received during his career and in these playoffs, we have to remember that he held Dallas to three goals or fewer in all seven games of that series, and that came on the heels of doing the job against the Blackhawks in five of the seven games as well.

He’s got a 2.29 GAA and a .929 save percentage through 14 playoff appearances, and he’s only been run once. Even more important for the Blues in NHL playoff predictions? Six different men have at least 10 points thus far in the second season.

The Sharks though, are going to be a different type of challenge. San Jose can play a really fast game or a really gritty game and live to tell about either one.

If the Blues spend too much time in the penalty box, they’re surely going to pay just as both the Los Angeles Kings and Nashville Predators did.

The Sharks converted nine times on the man advantage in the seven games against Nashville, and that first unit with Brent Burns, Joe Pavelski, Joe Thornton and Patrick Marleau is just too good to tame for a full series.

The Lightning and Penguins haven’t crossed paths often in the playoffs, but they have to feel like they’re looking at mirror images of one another. Both teams have superstars all over the ice with Sidney Crosby, Evgeni Malkin, Phil Kessel, Tyler Johnson and Nikita Kucherov all skating at the same time.

Both teams have defensemen who love to jump up into the offensive attack and have laser shots from the point. Both teams love to fly up and down the ice.

Yet the differences though, come both in terms of depth and in net. The Penguins clearly have more depth in their back lines than the Bolts do, but the play in net, if all things are considered equal, isn’t even close.

Matt Murray is a rookie who has been playing out of his mind. Ben Bishop very well could win the Vezina Trophy. The difference in NHL futures thus far for the ‘Burgh is that Murray hasn’t flinched in the face of challenges.

He’s already outplayed Henrik Lundqvist and Braden Holtby in these playoffs, and when he took out Holtby, he also allowed just a total of 15 goals in six games to one of the most lethal offenses in hockey.