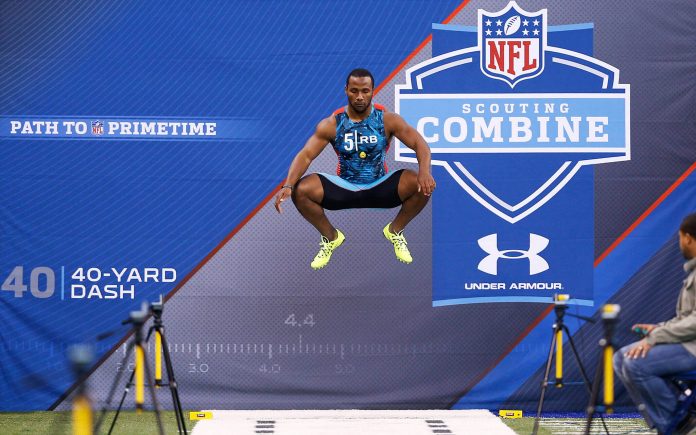 The NFL Combine is here, providing action-starved NFL bettors a place to wager on the incoming class of dynamic rookies. Myles Garrett is seen as the likely No. 1 overall pick at this point, as he continues to draw comparisons to Jadeveon Clowney in more ways than one. A strong Combine would solidify Garrett’s status as the No. 1 pick, but there are plenty of other young, talented players to wager on. Leonard Fournette, Dalvin Cook, Jabril Peppers, Jonathan Allen, and Adoree Jackson will all be in attendance in Indianapolis as well.

There has already been heavy action on this prop, seeing as how oddsmakers have been punished for their error. The ‘No’ for this wager opened at -130, and sharp bettors have seized on the opportunity. Still, there is some value in this bet. Kermit Whitfield, Jalen Myrick, John Ross, and Adoree Jackson are seen as the four players most likely to break the record, but it would genuinely be a surprise to see anyone from this group top it.

Whitfield is the Player With the Edge

Kermit Whitfield is the favorite to post the fastest 40-yard time, having run a 10.15 100-meter dash in high school. Allegedly, he ran a 4.23 40-yard dash in a mock combine earlier this year, but stories like these are notoriously common prior to the actual NFL Combine. Breaking this mark is more difficult than in previous years, as the NFL moved to fully automated timing in 2010. Since then, only six players have registered sub-4.3 seconds, the fastest being a 4.26.

Additionally, the last two players to break 4.3 at the NFL Combine were rail thin. Whitfield is listed at 183 pounds, a full 10 pounds heavier than Dri Archer who ran a 4.26, and 27 pounds more than J.J. Nelson (the last player to register sub-4.3). Not even Olympic athlete Marquise Goodwin could break the mark, managing an impressive time of 4.27. There’s always a chance the record could fall, but these odds don’t reflect it.

Most 225-Pound Bench Presses at the NFL Combine

At first glance, the Over may look to be a solid bet here. When we think about the NFL Combine, we think about outstanding performances and amazing feats of strength, but these performances are at the far end of a bell curve and certainly not the norm. Remember that Stephen Paea benched 225 pounds 49 times at the 2011 NFL Combine makes it feel like this number should fall pretty easily, but recent results suggest otherwise.

So What’s Changed in NFL Athletes?

Over the last few seasons, there has been a push towards faster and more agile linemen in the NFL, which has led many elite prospects to drop weight before The Combine in order to focus on their 40-Yard Dash times and Shuttle and Three Cone drills. Whereas the period from 2006 to 2012 saw 14 NFL prospects lift 225 pounds 39 times or more, this feat has only been accomplished once over the last four years.

The numbers from the last two years have highlighted this trend. In 2015, Ereck Flowers led the way with 37 repetitions, and 2016 gave us one of the lowest totals on record with 34 reps being the top mark. While there’s no doubt a few of these prospects could get to 39 if this was their primary focus, speed and quickness get the money and that’s what these athletes concentrate on.

Jackson has drawn comparisons to last year’s super-athletic cornerback Jalen Ramsey, and he could easily end up causing some jaw drops this weekend. Like Ramsey, Jackson was a champion long jumper at USC, and that typically translates very well into the Vertical Jump. Ramsey led all prospects last year with a 41.5-inch Vertical Jump, and while Jackson might not reach that lofty status, he should get to at least 37 inches.

In all last season, 31 prospects hit 37 inches or more in the Vertical Jump. What’s more encouraging, 14 of those were defensive backs. Jackson is among the creme de la creme when it comes to athleticism among defensive backs. He should have little problem reaching that mark.

To get in on the 2017 Combine action, be sure to check out the Bookmaker site.