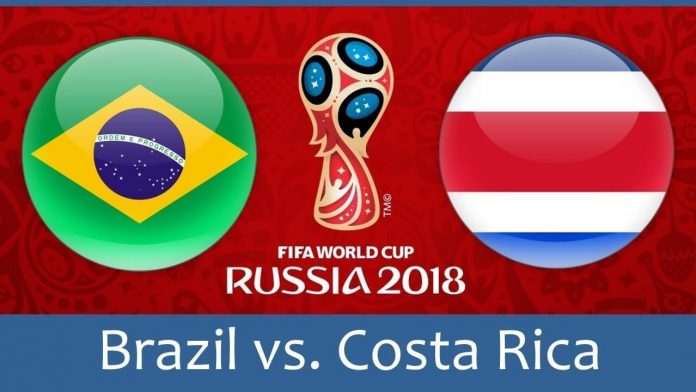 The favorites in the World Cup have slogged through the group stage thus far, which includes Brazil, after it played to a draw against Switzerland in its opening match. Brazil hopes to pick up a victory and a much-needed three points by knocking off Costa Rica next time out.

Costa Rica is in dire straits after losing its opener and needs to somehow scratch out at least a draw to stay alive in the group stage. Brazil entered the World Cup as one of the teams to beat but the opener was certainly not what it had in mind.

Neymar and the rest of the talented group need to focus and put together an impressive outing. Three points in this game is essential after the opening match draw. Costa Rica will do what it can to keep this one close but a win seems out of the question.

Brazil is entering this matchup as a gigantic -440 favorite to win this match. Costa Rica is the +1400 underdog, and not surprisingly, most of the money is on Costa Rica to somehow pull off the upset and pay off handsomely. A draw is listed at +520 as clearly the oddsmakers believe Brazil won’t have too much trouble claiming this victory.

Brazil jumped out to a lead against Switzerland in the 20th minutes in its opener on a goal from Philippe Coutinho. That seemed to be a harbinger of things to come, but Switzerland was able to right the ship and head into halftime only down by the one goal. The Swiss then shocked everyone by getting an equalizer from Steven Zuber. He was unmarked in the box and put in an easy header off a nice cross.

Brazil had chances the rest of the way but couldn’t score and the match ended a 1-1 draw. The last time Brazil failed to win its opening game at the World Cup was all the way back in 1978.

Costa Rica and Serbia played a scoreless first half and Costa Rica’s offense never got going after intermission while Serbia found the back of the net.

Aleksandar Kolarov came away with the crucial score, bending in a free kick in the 55th minute to give his team the 1-0 victory. Costa Rica needed a draw in that one and now is in a heap of trouble.

Neymar entered as one of the favorites to lead the World Cup in scoring, but he didn’t register a goal in the opener. He reportedly suffered a minor ankle injury but has resumed training. It is important to see if the injury affects him early on.

Brazil should have enough firepower to win this match with or without Neymar at full speed, but he is critical to the team’s chances at making a deep run in the tournament. Neymar will aim to shake off the injury concerns and score a goal in this matchup.

Brazil vs Costa Rica – Who You Should Bet

Take Brazil to cover the spread and do all the heavy lifting to push the total over the 2.75 threshold.