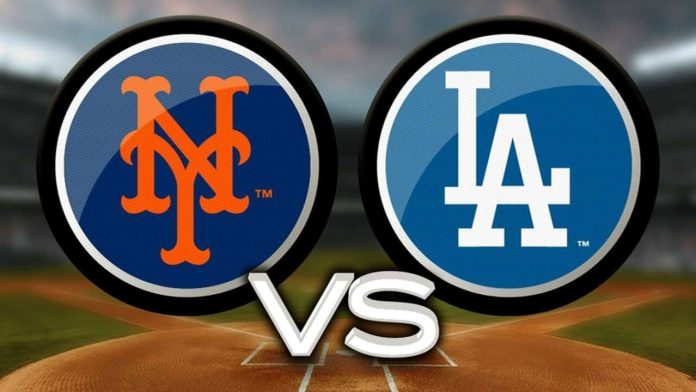 With the New York Mets falling farther out of contention, they could be showcasing one of their top assets for a possible trade when ace Jacob deGrom is scheduled to take the Citi Field hill in a matchup with the Los Angeles Dodgers on Saturday’s FOX Game of the Week.

It’s easy to forget just how hot the Mets were at the start of the season. They opened the campaign with 11 wins in their first 12 games and the Big Apple was buzzing. Thanks to injuries and poor play, they’ve cooled considerably, going 20-40 since. It’s been the opposite for the Dodgers, who stumbled out of the gate only to have a 12-5 June lift their spirits, and their place in the NL West standings.

At least the Mets will be home for a few days. Finishing up a 10-game road trip on Thursday, New York lost for the seventh time and third straight with a 6-4 setback to the Rockies, but they showed some punch offensively. More than likely it was the Coors Field effect. Still, the Mets scored 32 runs in the four-games while playing over the total in three of them. They won’t need nearly as many runs with deGrom on the bump.

DeGrom has allowed more than one earned run in just three of his 15 starts and he owns the Majors’ lowest ERA at 1.51, yet thanks to sparse run support he has only five victories to show for it. That changed, at least for one game, in his last start when the Mets tallied 15 hits, four homers and 12 runs in a victory in Colorado. The Mets scored more runs in that game than they had in deGrom’s previous eight starts when they crossed the plate just 11 times and went 1-7.

The Dodgers are coming off a shutout loss in Chicago where they dropped two of three games for their first series loss in the last 10. Still, they’ve been one of the hottest teams in baseball over the last five weeks. The Dodgers may have experienced the low-point of their season last month in Miami. They lost their second straight to the Marlins, extending their overall skid to six games, and dropped a season-high 10 games below .500.

It was unexpected for a team that was expected to run away with the NL West crown. Since then, however, the Dodgers have gone 22-9, moved back over .500 and they are within sniffing distance of the Diamondbacks for the top spot in the division. We’ve seen closer Kenly Jansen regain his form and the rest of the bullpen has been dynamic during the run. Working with a patched up rotation, the relievers have been counted on even more, and now they’re delivering quality outings.

Lefty Caleb Ferguson ( 0-1, 7.59 ERA ) is part of the Dodgers makeshift rotation and he’ll make his fourth start of the season. It’s likely his last opportunity to make an impression, though manager Dave Roberts said he has improved in each of his three starts. Ferguson made his MLB debut on June 6 against the Pirates, giving up four hits, three walks and four earned in just 1.2 innings. He lasted four innings in his next start allowing five hits and two runs, and had his longest stint in his last outing, going five innings with six strikeouts in a loss to the Giants.

With the numbers Jacob deGrom ( 5-2, 1.51 ERA ) is putting up he should have more than five wins. A lack of run support has limited the victory total, but it hasn’t stopped deGrom from being the early Cy Young candidate. Some of the best hurlers have struggled at Coors Field, but deGrom was nasty in his last outing, holding the Rockies to five hits and one earned run with seven Ks in eight innings. He leads the Majors in ERA and it’s the second-lowest of any pitcher through 15 starts since 2000. He’s gone at least seven innings in his last seven starts and he owns a 0.90 ERA with 90 strikeouts over 70.1 innings of his last 11 starts.

Don’t expect a lot of runs to be scored in this game with deGrom on the bump. And the ace has left the questionable bullpen out of the equation by pitching deep into games. However, the Dodgers are one team he hasn’t had much success against. They are the only NL team deGrom hasn’t beaten and he has an ERA of 3.26 in six career starts against them. Of course that means nothing now and deGrom is throwing better than anyone in baseball. It won’t take much for the Mets to get a win and they will plate a few off Ferguson, making the under a good play.