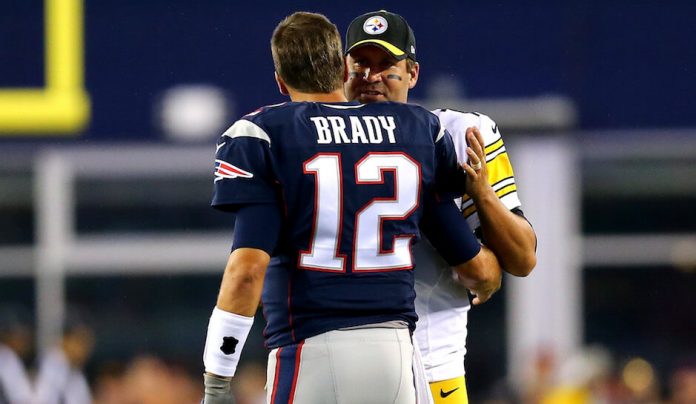 The New England Patriots. They’re world beaters. They’ve won the AFC East approximately 97 seasons in a row and are making an NFL record sixth straight appearance in the AFC Championship Game. And oh yes, they did all of this with Tom Brady suspended for the first four game of the season.

The Pittsburgh Steelers. They’ve got a notoriously obnoxious fan base, yet will be second best in that category in the AFC Championship Game by a country mile. If you take away players with last names starting with ‘B’, the Steelers have scored exactly 0 points in a meaningful game since the 7:12 mark of the first quarter on Christmas night against the Ravens. They’ve scored 73 points since then.

How These 2 Teams Got to the AFC Championship

The Steelers are only here in the NFL conference championship odds because Antonio Brown is 5-foot-10 and not 5-foot-8. If he was 5-foot-8, they would have lost to the Ravens on Christmas night and probably wouldn’t have even made the playoffs. But since they got here, they’re dangerous, though they didn’t score a single touchdown last week and still managed to beat the Chiefs.

If you want to know how valuable quarterbacks are in this league, just look at the football betting spreads of these two games these teams have been engaged in this year. In October, New England was -7.5 in Heinz Field, insinuating that it would have been -10.5 on a neutral field.

Now, the Pats are -6 at home in the NFL odds, according to Bookmaker.eu, insinuating that they should be just -3 on a neutral field. The difference? Ben Roethlisberger didn’t play in October. He’s back now, and apparently, he’s worth approximately 7.5 points in the NFL betting lines.

Stat of the Weird

The Patriots have won just four games this season against starting quarterbacks who have ever won a playoff game in their career. Two of those four games were represented by Brock Osweiler, and does he really count anyway?

Joe Flacco and Carson Palmer both led their teams to at least 340 yards of offense and scored 20+ points against the Pats. So yes, New England has only allowed 20+ points in five games this year, but when you go back and look at it, three of those five games came against Palmer, Flacco and Russell Wilson.

Sure, the Pats are now 14-3 ATS, and the Packers have won eight straight games since Aaron Rodgers said they were going to run the table. But do you know who has the longest winning streak in the NFL right now? It’s Pittsburgh with nine straight ‘W’s.

In that stretch, the team is 7-1-1 ATS (and the push against Cleveland in Week 17 really shouldn’t count anyway since none of the starters of note played in the game). Then again, if we’re going to dog the New England quarterbacks in that stretch, we might as well list off the QBs Pittsburgh has beaten in this run, too. Cody Kessler, Scott Tolzien, Eli Manning, Tyrod Taylor, Andy Dalton, Joe Flacco, Robert Griffin III, Matt Moore, Alex Smith.

Sure, it’s better than the list of QBs that New England has faced, but it’s not exactly a Who’s Who of quarterbacks either.

You Didn’t Realize it, But…

If you take away the de facto preseason game in Week 17, the Steelers haven’t let a running back get to 60 yards against them since Ezekiel Elliott did it on November 13.

Granted, there haven’t been a ton of great runners in that stretch, but ask Spencer Ware what he thought of the Pittsburgh run ‘D’ last week. The Chiefs were built on the run and their conservative offense, and Ware was limited to just 35 yards on eight carries for the day.