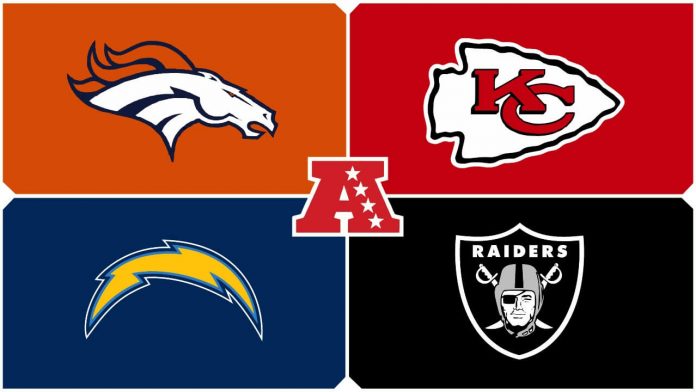 The Los Angeles Chargers didn’t make the playoffs or win the AFC West last year but the oddsmakers are believers in 2018. The Chargers have been labeled as the team to beat ahead of the Kansas City Chiefs, Oakland Raiders and Denver Broncos.

The Chargers have longtime quarterback Philip Rivers under center once again but the key to their rise is an improved defense. Los Angeles has some elite players on that side of the ball and may be the most well-rounded team in the division.

The Chiefs made a bold move this offseason by trading away starting quarterback Alex Smith, which has given the reins to young signal-caller Patrick Mahomes. Kansas City has a lot of talent on both sides of the ball, and if Mahomes is simply competent this team figures to fight for the division title. The Chiefs may boast the widest variance among AFC West teams because of the unknown nature of Mahomes’ ability to lead the offense.

The Oakland Raiders struggled in 2017 but hope that between standout quarterback Derek Carr and superstar pass-rusher Khalil Mack, there is enough top-end talent to return into the divisional and playoff mix.

The Denver Broncos have some talent on defense but the quarterback position has been an issue for multiple years since Peyton Manning’s retirement. Case Keenum was signed in free agency and he will aim to stop the bleeding.

This is an interesting group of teams as it’s not out of the realm of possibility that any of them end up on top of the heap when the season concludes.

The Chargers are not a good bet because of the line. There are more established teams that are the favorites in their divisions and it’s smarter to go with those that have more of a track record. Los Angeles seems to have all the tools but this team has had high expectations before and failed to live up to them.

The AFC West is tough, as every team is capable of beating another on any given day. There is just too much unknown in this division to go with the favorite.

A much better bet is the Chiefs. The odds are longer but beyond the quarterback position Kansas City has everything it needs to win double-digit games. As long as Mahomes doesn’t turn the ball over too much this team could make a nice run. The Chiefs were willing to deal Smith after watching Mahomes in practice for a year, which bodes well for his ability to come in and play well. It’s not a given that the Chiefs play well this season but these odds are too good to pass up.

The Raiders are more than 4-to-1 to win but even that seems low. Carr is still trying to prove himself as an upper echelon quarterback and struggled throughout 2017 after a nice 2016. If the offensive line isn’t dominant this is a team that could have some issues. Oakland seems to have little chance of winning the AFC West.

When it comes to longshots, the Broncos are a better pick. If they get competent quarterback play from Keenum, Denver could be right back in the mix. With the type of defense the team has, Keenum won’t have to try to do too much, and that’s the situation in which he is the most comfortable.

While the Broncos are a good bet, the best choice is the Chiefs to win the AFC West in NFL odds.