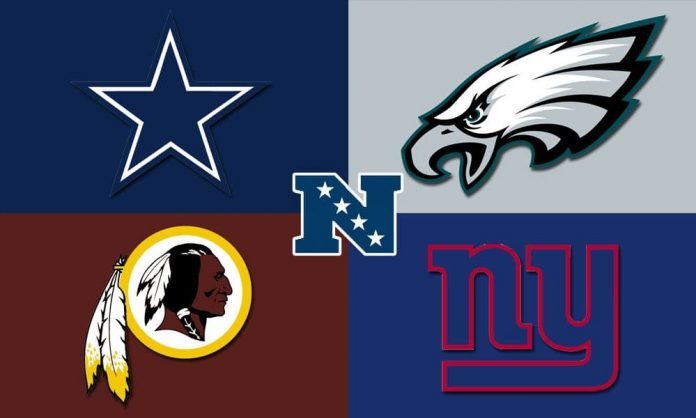 The Philadelphia Eagles are the defending Super Bowl champions and are returning nearly every key piece from a season ago. They have also added defensive end Michael Bennett among others so it is clear why they are the team to beat in the NFC East. The Eagles won last year’s title despite losing quarterback Carson Wentz to a torn ACL. He should be good to go early on but even if Wentz has to sit for a few games backup Nick Foles is still a solid option. It’s hard to see the Eagles losing this division because they are so deep and talented.

The Dallas Cowboys figure to be the toughest competition to Philadelphia’s throne. They have quarterback Dak Prescott, running back Ezekiel Elliott and a stellar offensive line leading the way. Dez Bryant was released this off season but the offense should be fine. Dallas struggled a year ago but figures to bounce back and be in playoff contention once again in 2018.

The New York Giants went through a dreadful 2017 after a rash of injuries. They could have started a rebuild by drafting a quarterback but went for more of a quick fix by choosing running back Saquon Barkley out of Penn State. Between Barkley and star wide receiver Odell Beckham, the Giants should have a pair of elite weapons for signal-caller Eli Manning. It should be apparent early in the season whether or not the decision to forgo a quarterback in the draft was the right one. New York was awful last season and it would be a pretty big surprise if it competes for the NFC East title.

The Washington Redskins are the biggest longshot to win the division. They downgraded at quarterback when Kirk Cousins left in free agency. The team traded for Alex Smith and he isn’t a bad replacement but there are questions as to whether there is enough talent around him. If Cousins couldn’t get this team to win consistently it stands to wonder if Smith can find any success. It’s going to be quite the ordeal for the Redskins to find a way to stay up with the powerhouse Eagles.

The Eagles are the clear favorite but really these are decent odds. The Redskins and Giants do not seem to have a great shot at winning the NFC East, so all Philadelphia would need to do is hold off the Cowboys. Injuries happen to everyone, but the Eagles have the type of squad that can overcome these issues, as they showed a year ago. It’s not always smart to go with the favorite but these are solid odds for such a dominant Philly team.

The Cowboys are the other option. Teams with a solid quarterback and offensive line should have a chance each week, and Dallas boasts that. There are some questions on defense and in the end the chance to surpass the Eagles could rest on that unit.

The Giants are a very poor wager. New York may improve this season but have serious questions on defense and a suspect offensive line. It would be a huge upset for the team to win the division and the odds are not long enough for it to be a good bet. The Redskins, too, have very little chance of winning, but a quarterback switch at least makes them bring more intrigue and aren’t the worst longshot pick in the world.

Go with the Philadelphia Eagles to win the NFC East