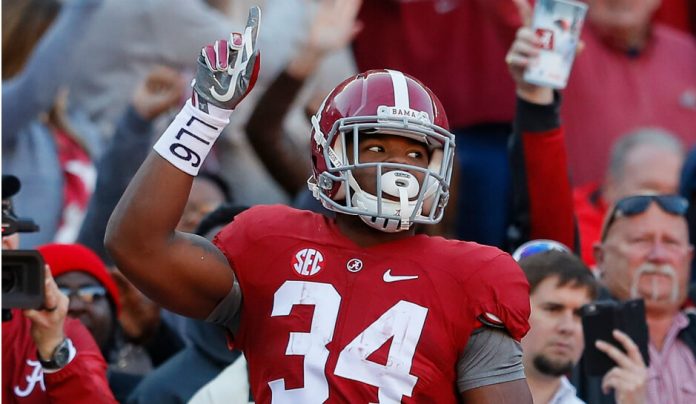 There’s no doubting the dynasty that is the Alabama Crimson Tide. Nick Saban has cemented himself as the best coach of our generation, and he’s already got a foot in the door in the conversation as the best coach ever in the history of college football.

But after all of these fantastic teams that he’s had, is this 2016 edition the best ever? Bettors are certainly treating the Tide as if they have no equals within the college football favorites for the National Championship.

Can Alabama Win the National Championship?

But never before have we seen a team lined anywhere near this high to win two games against Top 4 teams.

What About the Washington Huskies?

On paper, the Crimson Tide have the most lopsided playoff game we’ve seen in the brief history of the CFP. They’ve got the No. 4 Washington Huskies, the Pac-12 champs who really didn’t play against much of anyone all season long.

These Dogs will have a shot to have their day, but they could have been had at a price as low as +13.5 within the first 15 minutes of the brackets being released on “Selection Sunday.” A few short hours later, and Washington was all the way up to -16.5.

“We’ve taken steady Tide money for the past two months, from sharps and squares alike, and I don’t see any way this number closes at two touchdowns or less,” BookMaker.eu spokesman Scott Cooley said after opening Alabama -14.5. “Don’t be surprised if this spread jumps to -17 at some point.”

National Championship Odds for the Rest of the Field

The Huskies, though, aren’t the only ones hoping to have a shot at the Crimson Tide. In the other national semifinal to be played at the Fiesta Bowl, the Ohio State Buckeyes will take on the Clemson Tigers.

The Tigers hopped over Ohio State in the last CFP Rankings, but that was of no consequence considering the fact that these teams have been on a beeline for one another for a few weeks now.

Top bookmakers still see OSU as the better of the two teams by a relatively minimum margin, opening up the Bucks at -3.5, a line that was quickly bet down to -3.

Does Ohio Have a Shot?

The college football betting oddsmakers certainly believe that Ohio State has the better shot against Alabama as well if that’s the way this ultimately played out. The Buckeyes are  at +375 football odds to win the National Championship, a far cry from the +650 Clemson is lined at to pull off the upsets of both Alabama and Ohio State.

Washington is the biggest dog of the bunch at 18 to 1, though that price does seem to be a bit overstated. One would like to think that pulling off an upset of Alabama at a price of around +600 or so wouldn’t leave the Huskies lined at anything more than +200 on the moneyline against either Clemson or Ohio State, and even that is probably a bit of a stretch.

BookMaker.eu has also released odds for Alabama against the field. You can wager on the other three teams at +200, a price that could ultimately end up looking worthwhile even if Washington does fall by the wayside.

Remember that the Crimson Tide were only -6 in the National Championship Game last year against Clemson and didn’t cover. It’s hard to imagine they’ll be laying significantly more than that in a similar matchup this January.