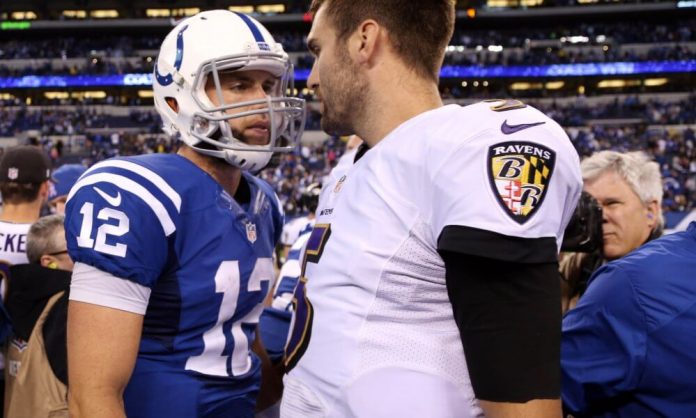 The clubs are forever linked, but not in a way you might think. Rather, in a way that has become commonplace in professional sports. The Colts were Baltimore’s original NFL franchise, playing in the city for three decades until a dispute over a new stadium forced ownership to look elsewhere. Following the 1983 season, the Colts loaded up the moving vans and headed to Indianapolis. Several years later, the Cleveland Browns were in financial peril and owner Art Modell moved his club to Baltimore with the city promising a new stadium that was denied the Colts. In 1996, the Ravens were officially born.

Looking for their first winning season since 2014, the Colts are hoping some Luck helps get them there. Playing his first game since the end of the 2016 season, Andrew Luck looked sharp in a win over the Seahawks last week. Without their star quarterback the Colts stumbled to four wins in 2017, their fewest since a two-win campaign in 2011 that gave the club the first round pick to select Luck. The clubs renew their rivalry on ESPN’s Monday Night Football.

The Ravens have played two preseason games, but they haven’t gotten a lot of work in those contests. Most of the regulars sat out the Hall of Fame game win over the Bears, and the Rams’ JV team wasn’t much of a threat last week. Baltimore’s regulars got some playing time and the Ravens easily handled the Rams, 33-7, extending their preseason winning streak to 10 while going 9-1 against the line in those contests.

Making his preseason debut and facing plenty of flack about a subpar 2017 season, Joe Flacco was money in his only series against the Rams, completing 5 of 7 attempts for 71 yards with a short scoring toss to end it. Flacco is expected to see more action on Monday and he’ll go against the Colts first-team defense, which will pose more of an obstacle than the Rams.

Frank Reich is a better coach if Luck is able to milk a full season from his surgically repaired shoulder. Luck got the start last week in Seattle, leading the Colts to a pair of field goals on his two drives. He played 20 snaps going 6 of 9 for 64 yards behind a line that gave him a clean pocket. Reich said the plan is to give Luck more work on Monday night as he continues his quest for comeback player of the year.

As offensive coordinator with the Eagles last season, Reich knows the value of having a competent backup quarterback. And with Luck’s recent injury history having a plan B is a must. There’s a good chance the Colts keep three QBs on the opening day roster and the battle has intensified in training camp. Jacoby Brissett is the primary backup with Brad Kaaya and Phillip Walker also on the roster. All four saw playing time last week and the rotation on Monday could be similar.

Now that Luck is back slinging the ball around, he needs someone on the other end of his aerials. There are question marks at receiver after T.Y. Hilton, and Reich is using exhibition games to better gauge his options. Ryan Grant has emerged as the No. 2 receiver, but the list got smaller following the loss of rookie Deon Cain to a knee injury last week.

There’s a chance Reich will look elsewhere for help at the position, but in the meantime the battle is from within. Kasan Williams had a team-high four receptions last week and nine different receivers were targeted by the quartet of quarterbacks.

It’s hard to overlook Harbaugh’s success during preseason games and with the Ravens spotted a point on the opening line they look like a good pick. The competition will be more intense this week and the Ravens are excited about the opportunity after playing the Rams B team last week. Most of Baltimore’s starters were yanked early in last week’s rout and they should get more playing time on Monday night.

The return of Luck has increased the excitement around the Colts, but they enter this game with issues at receiver and in the backfield. Reich said he plans on getting Luck more work and he could use it with a new group of receivers. With Marlon Mack and Robert Turbin nursing injuries, rookies Jordan Wilkins and Nyheim Hines, along with Christine Michael will get a bulk of the reps, and that could keep the score under the closing total.

NFL ATS Pick: Ravens +1 and the Under