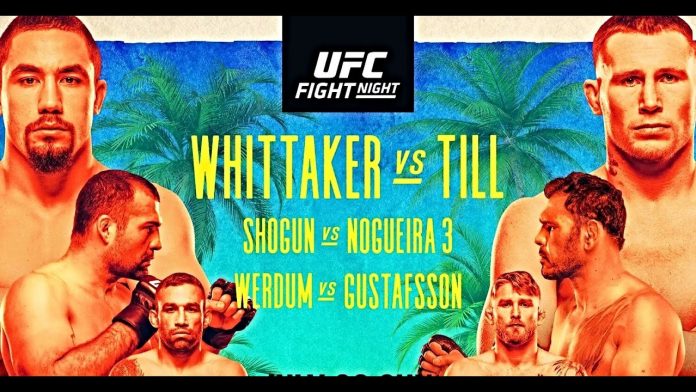 The UFC is calling in heavy hitters, hall of farmers and former champions to end a big week at Fight Island.

Let’s start with the main event: a middleweight banger between Robert Whittaker and Darren Till. We’re all eager to see how Bobby Knuckles bounces back from losing his belt to Israel Adesanya. The loss snapped a sweet nine-fight winning streak that included wins over Jacare Souza, Derek Brunson and Yoel Romero – twice. That’s one of the better runs we’ve seen at 185 in the past few years.

After years of struggling to make 170 pounds, Darren Till jumped right into the fire by targeting Kelvin Gastelum for his first middleweight scrap. While the Brit eked by with a split decision, beating Kelvin means a lot in this weight class. Just like that, Till finds himself fighting former champion in just his second divisional fight. If Till can impress here, a title fight (or at least an eliminator) wouldn’t be far behind.

In the co-main event, we’ve got a trilogy match between the legendary Shogun Rua and longtime veteran Antonio Rogerio Nogueira. They’ve got a long history, having crossed paths twice in the past. Their first meeting dates all the way back to 2005, in the immortal PrideFC. The pair met 15 years later at UFC 190 in November 2019. In both cases, Shogun walked away with his hand raised.

Perhaps Nogueira can finally change the outcome. The bigger question is whether either will retire after the fight: both men are far past their primes, with nothing left to prove. Shogun is unquestionably a future Hall of Famer, so that’d be a big deal.

Three intriguing scraps, lots of opportunities in the online sportsbook. Let’s take a look at the UFC odds at BookMaker.eu and break down the best betting options in each matchup.

Till’s money line has been steadily trending downward, as it was +118 a few weeks ago. Most of the action has been on the Brit, and we’ve been leaning that direction since the beginning. While Till might have a rep as a violent striker, the truth is that he’s much more of a sniper than a machine gunner – averaging just 2.41 strikes landed per minute. The guy hits hard, but he’s very selective about when he throws.

Because Tyron Woodley was able to pressure and finish Till, the thinking is that he has trouble with aggressive fighters. That’s only partially true: The Gorilla had trouble with T-Wood because the threat of the takedown. He’ll have no such worry against Whittaker – a boxer by nature. If Till was able to flummox Gastelum, he has the ability to win three rounds against the former champ.

We’re also not sure where Whittaker is at physically. He was supposedly healthy against Adesanya, but he came out brawling – suggesting that there was ring rust after a long injury layoff. Speaking of injuries, Whittaker’s body has been through a lot, from major knee reconstruction to a collapsed bowel to taking the full fury of Yoel Romero to the brink of unconsciousness, twice. He just feels like a guy that will drop off sooner than later.

It wasn’t surprising that Gustafsson unretired. What was surprising is that he decided to move up a weight class. In retrospect, it’s probably a smart move: he wasn’t going anywhere at 205, and the thin heavyweight division could use some fresh faces. Beating a former champion like Werdum would immediately make the Swede a person of interest.

Werdum’s status as a huge underdog shows you just how much he’s declined. A 2-year suspension for PEDs right when he turned 40 was horrible timing – the Brazilian came back with a saggy body and looked listless in a loss to Aleksei Oleinik. Though he showed flashes of his brilliant grappling against the Russian, he was also backed up by a guy nobody would confuse for a top-notch kickboxer.

Keep a close eye on Werdum’s body: if he’s looking trim and in shape, consider him a live ‘dog. If he comes in with dadbod, he’s not gonna have the cardio to hang with Gus.

We’d also recommend looking at the fight goes to decision prop. This is a three-rounder, and Gus isn’t a knockout guy to begin with. We’re not sure how much power he’ll have at this weight class.

Both these guys are old, and both these guys are very, very creaky. Yes, that puts both guys at danger of gassing out early, and their chins are compromised at this point. But here’s the rub: neither guy is a really capable finisher. They tend to get in a grueling, lumbering wars. And they’re both experienced enough to drag out fights.

There’s a reason that this prop bet pays out more than 2-1 – it’s a high risk bet. But there’s a very good chance that we get to the start of the third and nobody has done serious damage to the other. You’ll have wished you took this bet in that scenario.