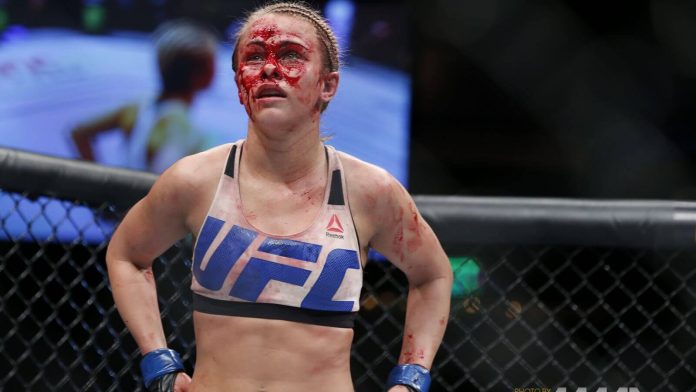 Female fighters have been around for decades, but it’s only recently that the fighting world and media has finally started paying real attention. The shift in attitude could be down to the signing of Ronda Rousey to the previously male-only UFC.

Now MMA fans all over the world are sitting up and taking notice of these fierce fighters who are just as brutal and bloody as their male counterparts.

So we’ve compiled a list of the bloodiest and most extreme female fighting moments in the history of MMA.

The Most Brutal Catfights

If the thought of two women brutally beating each other to a pulp makes you feel weird or squeamish, or you think that it’s in any way “wrong,” then perhaps you’d best not read any further.

Women’s MMA has come a long way in the past five years, and with star athletes such as Ronda Rousey and Holly Holm currently fueling the fire, it looks like they have finally won their right to fight, and to bleed.

Events, gyms and organizations for female fights are popping up all over the world, like in Goa, where just last year Combat Cage Fight held their very first women’s fight as a co-main event.

In Thailand, women competing in Muay Thai events are invited to share their “war face,” a selfie of their blood-soaked faces in celebration of their combat injuries.

So now you know what to expect, let’s get our list of bloody female fights started…


At UFC Fight Night 69 in 2015, Joanna Jedrzejczyk, the defending UFC champion, pulverized Penne’s face and took the win in a TKO at 4:22 mark in the third round of this brutal fight.

The fight was rather one-sided, and the scoreboard agrees. Jedrzejczyk’s lightning-fast jabs meant that Penne didn’t stand a chance.

In the second round, a snapping front kick from the Polish fighter connected with Penne’s nose and the blood began to pour. Jedrzejczyk swiftly followed that foot with an elbow, and then a flurry of fists just to make sure that that nose was good and broken.

Entering the third round, Penne was looking like Shrek’s little sister, with a badly swollen and closing eye, and a busted nose.  She took another pummeling before the referee called time on the fight. 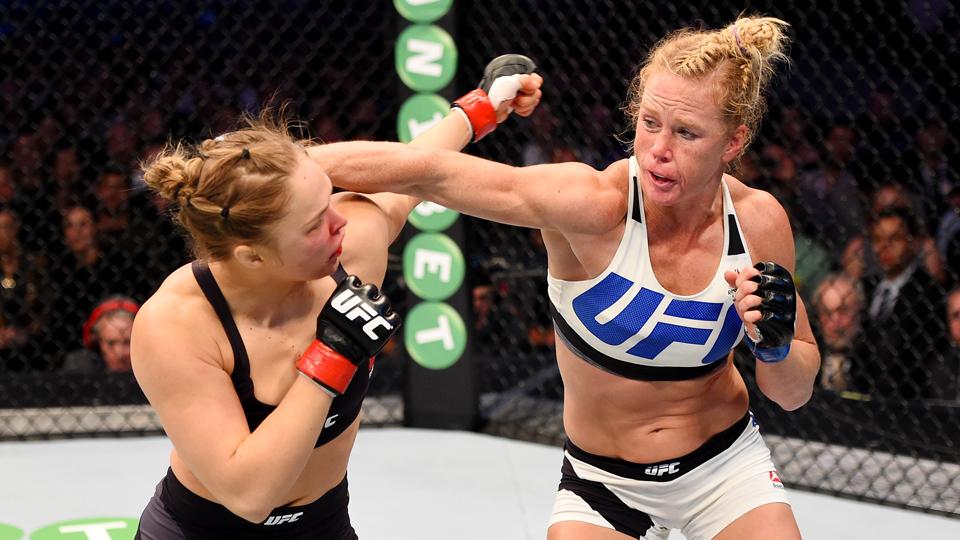 Perhaps the most well-known fight in women’s MMA is the epic knock-out of UFC bantamweight champion Ronda Rousey by former boxing champion-turned-MMA fighter Holly Holm. The UFC 193 bout, held in Melbourne, Australia, was one of the most anticipated female fights ever, pitting two champions against each other.

Rousey boasted a run of 12 wins, only a few of which even made it to the second round.  Her previous three fights had a combined time of a measly 64 seconds. Rousey had never lost a fight, and seemed invincible until that fateful night.

Holm dominated the first round. Rousey, as always leading with the head, left herself wide open for Holm’s left-hand, which repeatedly connected with her head and face, busting Rousey’s lip and opening her nose.

Rousey ended round one looking exhausted, but she didn’t have long to go.  Less than one minute into round two, Holm shocked the stadium with a swift head kick, taking Rousey down and immediately pouncing on her with fists to the face before the referee called it. Total brutal knockout.

Holms didn’t just knock out Rousey that night – she knocked her out of the ring completely – as the defeated champ withdrew from competing after her takedown.  However, she is set for a dramatic return on December 30th, with a chance to regain her title as Champion as she faces Amanda Nunes.

If you look up this female fight on YouTube you’ll see the title, “Blood Was Everywhere” and they aren’t lying. By the end of the fight, van Houtum looked like she had had her hair dyed red in the ring.

Van Houtum’s nose was busted up in the first round, painting the canvas crimson.  She was patched up at the end of the round and looked good to go. In round 2, she started off well, slamming Buch to the ground. However, Buch managed to get a fist free in the grapple and pushed it into the face of van Houtum re-opening her nose and spraying blood all over the place.

The referee stepped; van Houtum’s nose was so messed up that the doctor called an end to the match at 3:26 in the second round.

Pittsburgh was home to the UFC Fight Night 83 and saw Californian Kelly Faszholz go three rounds with Alaskan Lauren Murphy. The bantamweight battle started off bloody with Murphy breaking Faszholz’ nose, and before the end of round one, both had bloody faces.

While these two were knocking chunks out of each other, their blood was being splattered on the commentators’ broadcast table and even on the camera raising its gruesome factor.

Murphy went on to win via TKO with just five seconds left on the clock. 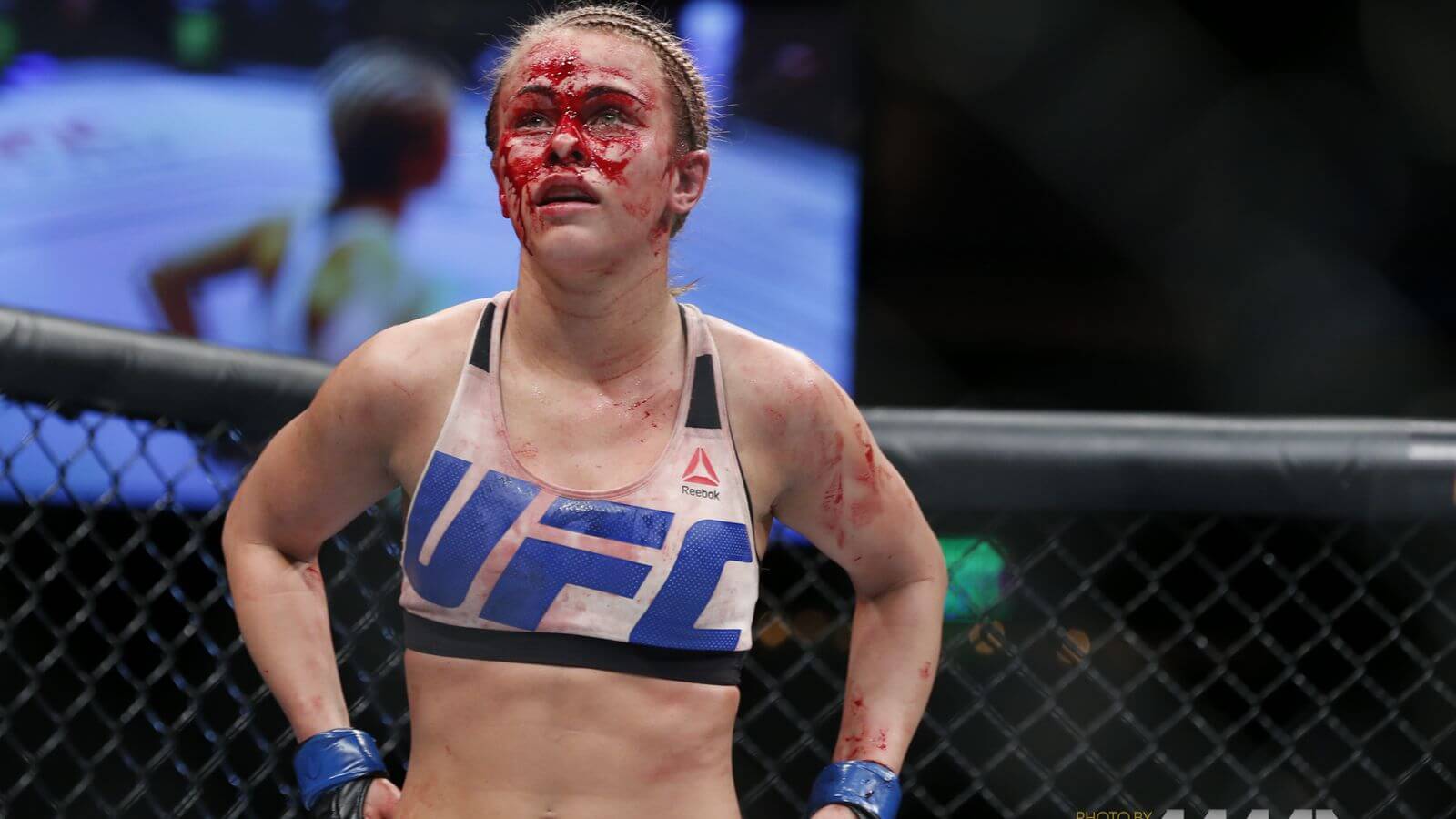 In this brutal girl fight, these two strawweight up-and-comers met in December 2015 and went the full five rounds before Namajunas finished VanZant via submission. In this one-sided battle, the underdog Namajunas dominated and destroyed her opponent with a total of 8-0 takedowns and an impressive 57-10 strikes.

VanZant had her elbow popped out twice in armbar attempts and a nasty gash under her eye caused a bloodbath that soaked both her and Mamajunas. VanZant admitted in post-match interviews that she was cleaning blood out of her ears for several weeks after the fight.

Despite being defeated so spectacularly, the bloodied VanZant became the poster girl for resilience and determination, gaining the respect of fans and professionals alike for the way she refused to give up, enduring the onslaught for 22 minutes before finally succumbing to a rear-naked choke. 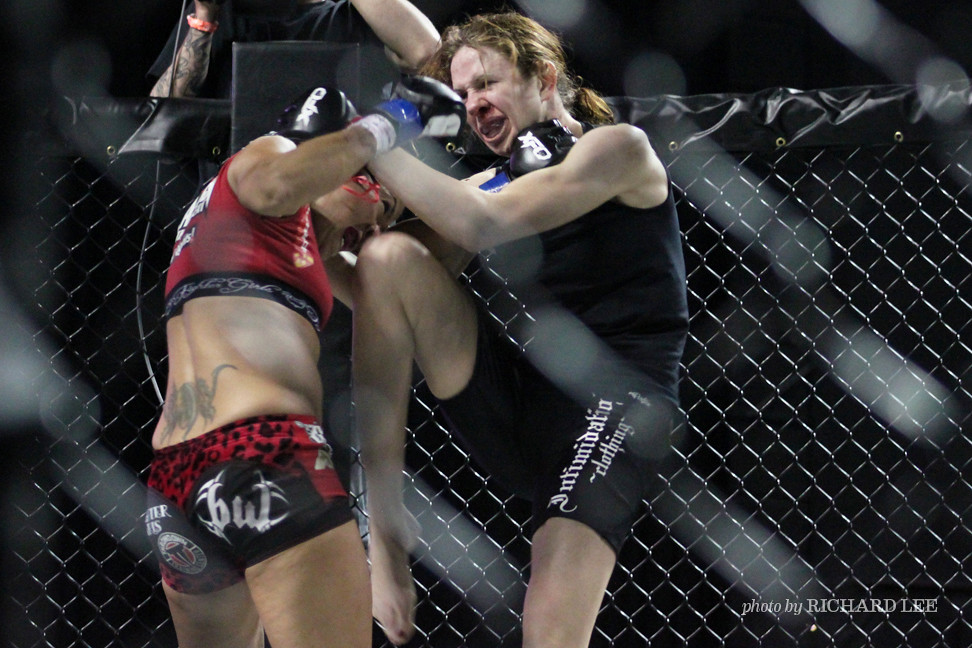 In 2011 Amanda LaVoy took a controversial win over the favorite Gutierrez at the 4th bout of XFO 39 in Chicago. Despite being the more effective striker in the first round, Gutierrez took a couple of shots to the face, cutting her eye, which then began to close.

Then, just 24 seconds into the second round, the doctors called stoppage and LaVoy won on a technical knockout. The killer blow was a knee to the left side of Gutierrez’s head, opening a massive gash that sent a stream of blood down her body and onto the canvas.  Gutierrez needed 28 stitches to close that wound, plus another four to the cut on her eye.

Gutierrez later appealed the decision of the fight claiming that LaVoy had grabbed her by the hair, an illegal move in MMA, and held her head down to deliver the knee. You can watch the fight here and decide for yourself if that was the case.

In April 2012, Jessica Penne and Lisa Ellis met in what has been dubbed as the bloodiest fight in WMMA history. The Invicta FC event saw these atomweight fighters battle it out to the third round when Penne clinched a TKO victory at 2:48.

These two warrior women had wrestled and grappled as blood literally poured from Ellis’s nose which Penne broke with a swift knee to the face.  In an interview immediately after the fight, victor Penne said that rather than distract her, the blood motivated her and

In an interview immediately after the fight, victor Penne said that rather than distract her, the blood motivated her and she “just kept going” which is exactly what she did… kept punching that broken, bloody nose to give her opponent a gory crimson mask.

If you are feeling a bit blood-thirsty, you can check out the fight here.

This is perhaps one of the most controversial in MMA female fights, causing outrage and raising the question whether transgender athletes should be allowed to compete in MMA.

In September 2014, at the CCCW: The Undertaking event in Illinois, Fallon, who  transitioned in 2006, came up against Tamikka Brents. Brents was against the cage the minute the fight started and found herself in a clinch where Fox powered into her torso and face with her knees.

They fell to the ground, and Fox rained down with fists and elbows, with Brents managing to turn over to get some protection before the referee called the fight at 2:17.

Brents suffered an orbital bone fracture, a concussion and soft tissue damaged in the head which required seven surgical stitches. 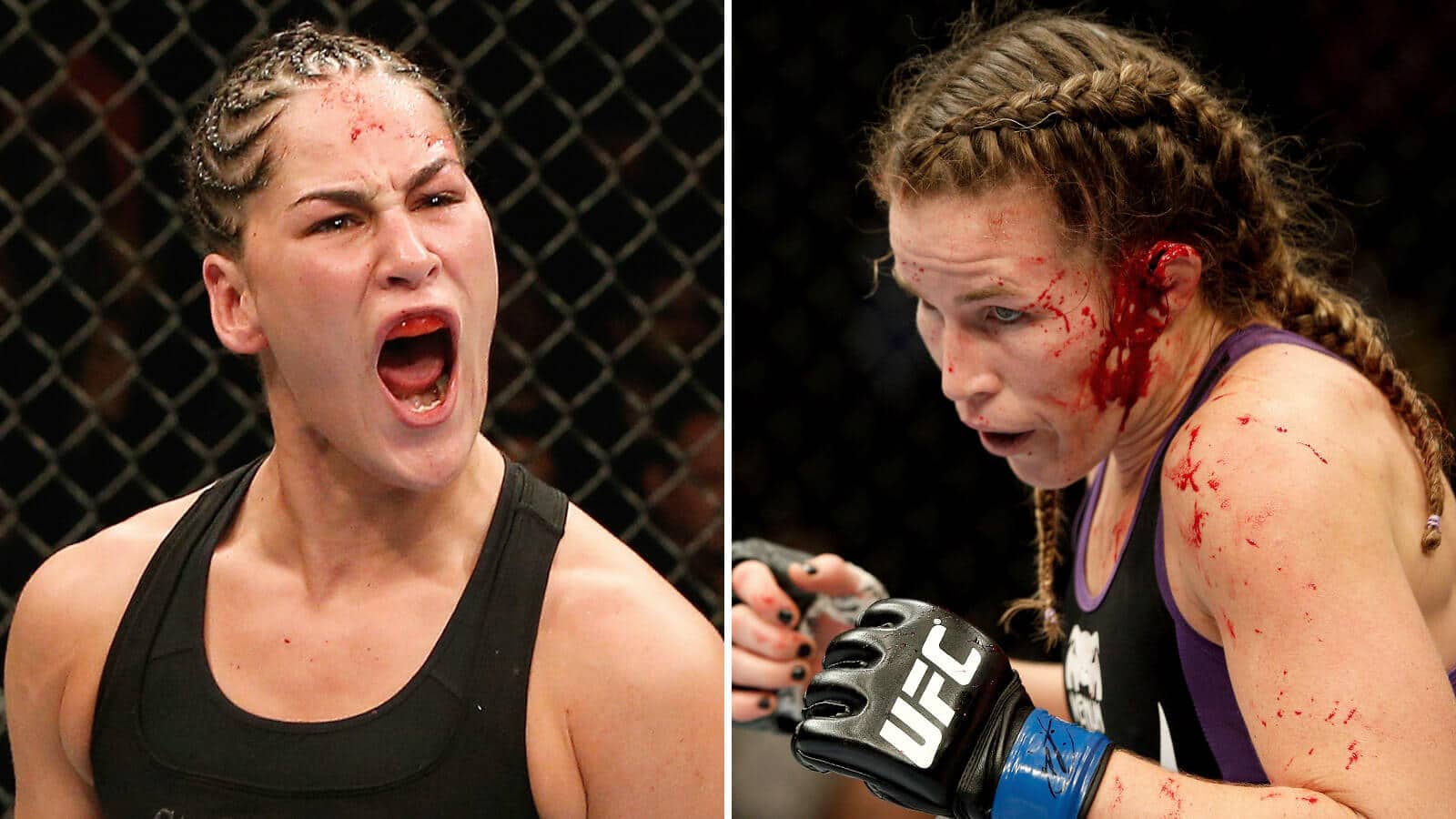 Taking top spot in our ultimate bloody female catfights is the 2014 UFC 180 match between Jessica Eye and Leslie Smith. That evening in November the spectators in the Arena Ciudad in Mexico City witnessed one of the most gruesome sights in MMA history – male or female. Jessica Eye defeated her opponent in a TKO in the second round in a rather unexpected and very bloody way, but it wasn’t exactly how you’d expect it.

The match was stopped by ringside doctors when Smith’s ear exploded. Yes, you read that correctly. Her ear exploded, and it is just as gross and as bloody as you imagine it to be.

Smith had been draining a cauliflower ear for a month previous to the fight, but when Eye delivered a right-hand punch to the side of Smith’s head blood spurted high as the cauliflower ear burst open. Eye was reported as saying, “When I connected and saw her ear blow up, that became my main target. I was going to keep hitting it until they stopped the fight or it fell off.”

Despite her severed ear dangling from the side of her head Smith was keen to continue, even screaming in Spanish that she was fine to fight.

With all the blood, sweat and tears, you could say this is one of the most exhilarating sports to watch and MMA betting some of the most fun, with women’s MMA certainly no exception.  If you want to get a piece of the action, click here to check out the odds for the next female fights.