Home Latest News The Most Shocking UFC Upsets of All Time 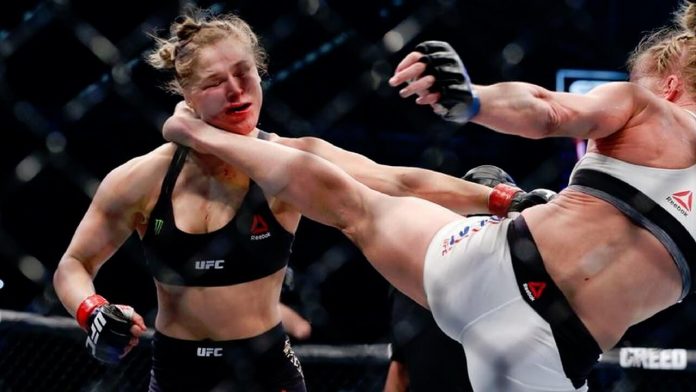 We can’t really predict the outcome of sporting events with 100% accuracy, but we usually have a fair idea – hence the whole concept of the favorite and the underdog.

However, every once in a while, those underdogs bite back and give us a result that no one could ever have predicted. Underdogs seem to have a fighting chance in MMA, winning almost 39% of all UFC fights in 2015.

Here we’ve compiled some of the most surprising upsets in UFC Fight Night history.  Let’s count down.

Rousey, a poster girl for women’s MMA, was the first female signed to UFC and her popularity did a lot in raising the credibility and awareness for women in the sport.

That aside, she’s also a powerhouse and fierce fighter – undefeated in all her 12 matches and was the reigning bantamweight UFC champion. The former Olympic bronze medal winner in judo is considered a submission specialist, with nine of her 12 matches being won by way of the armbar.

This woman was unstoppable. That was, of course, until November 2015, when she was pitted against champion boxer-turned-MMA fighter Holly Holm, at UFC 193, held in Melbourne, Australia.

Rousey Exhausted by Round One

Rousey started the fight in a slightly less fiery way, as is her style, opting for more punches to play Holm at her own game – an odd choice when Holm is a boxing champion.

Rousey finally managed to lock onto Holm to get her in a clinch, but Holm slipped out avoiding that deadly armbar.

Holm won the first round easily, already exceeding expectations since none of Rousey’s matches had ever made it beyond the first five minutes before. While Holm looked composed and comfortable starting round two, Rousey seemed frustrated and exhausted.

Less than a minute into the second round, Holm delivered a swift kick to the head, dropping Rousey like a ton of bricks to the canvas. She was out cold, and Holm had taken the championship in one of the biggest UFC upsets of 2015.

Popular Irishman Conor McGregor was the first to hold two UFC champion titles simultaneously. He took the featherweight championship by defeating José Aldo via knockout after just thirteen seconds in the first round, a UFC record for the fastest victory in a title fight. He then went on to defeat Eddie Alvarez for the UFC Lightweight Championship at UFC 205.

So when Nate Diaz was pulled in as a late replacement to face McGregor at the UFC 196, everyone thought that the outcome was a sure bet.  McGregor was by far the favorite, coming into the ring on the winning streak of 15 straight wins, with an overall of 17 wins out of 19 fights.

Diaz Fights the Match of His Life

The first round saw McGregor drawing Diaz in to close the distance and connecting with a swinging left hook, which opened Diaz’s eye-brow.  Near the end of the first round, Diaz manages to get McGregor to the ground but with a nifty roll, McGregor slipped out of danger and got himself on top.

With the start of the second round it still looked as though the outcome would be as expected.  But the turning point soon came with a staggering blow to McGregor’s head that took him off guard and opened the fight right up. Diaz suddenly came alive and connected a few more times, McGregor defending before taking Diaz to the ground. This time, Diaz, a jiu-jitsu specialist, took control with a rear naked choke, forcing McGregor to tap out at four minutes and 12 seconds into the second round.

The +300 underdog Diaz had just fought the match of his life on 11-days notice to beat the mighty McGregor.  For a full fight breakdown, check out the official UFC results.

The UFC 196 was a big night for UFC underdogs. In this defending title match, Holm met Tate in her first fight since her aforementioned upset with Rousey. Coming off the back of such a win, and being the newly crowned bantamweight champion, the odds were very much in Holm’s favour.  Holm was also pretty confident in her ability to retain the title, and in fact had asked for the bout as a means to prepare her for a rematch with Rousey.

Holm won the first round, scoring better in most exchanges, throwing and connecting more than her opponent. However, Tate made her mark in the second, getting in a good few strikes, and then charged at the champion to take her to the ground, dominating her in a grapple. It looked like Tate had it in the bag but Holm hung on and managed, just barely, to resist until the bell.

The next two rounds were rather slow, with the two women hesitant to attack. The fifth and final round started to heat up, with Holm becoming more aggressive getting in a few side and push kicks.

With just two minutes left on the clock, Tate finally managed to take Holm down. Holm desperately tried to gain control. Tate saw her chance: The title was now within reach and she got her arm in position under Holm’s chin for the choke. No matter what the champ did, she couldn’t escape out of Tate’s hold and the referee called it just as Holm passed out. Check out the fast and furious grapple that resulted in Tate’s title win. 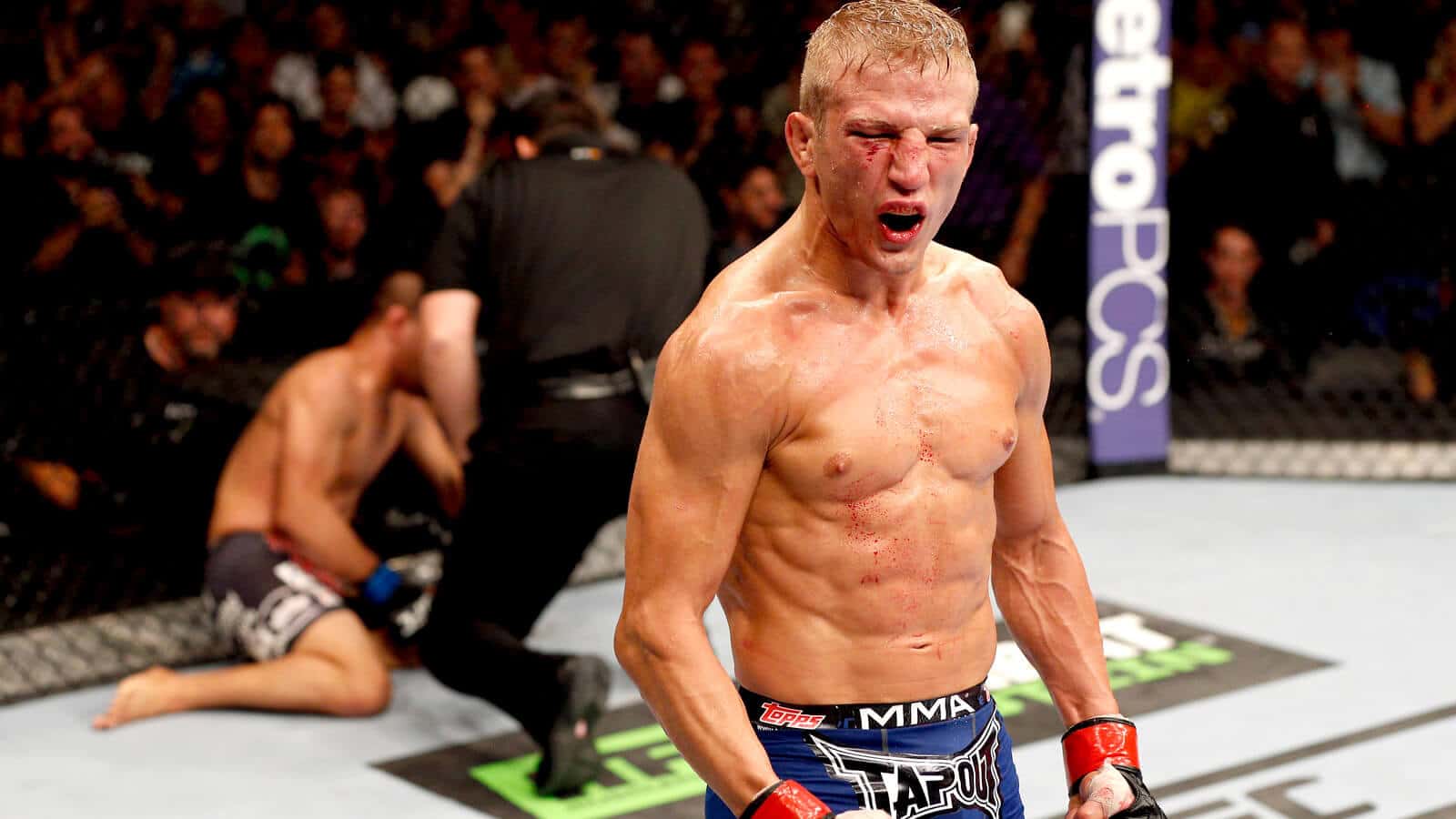 Coming into the UFC 173 cage, Renan Barao needed no introduction. With the Brazilian UFC champion boasting 32 wins in a row spanning nine years, it was the longest unbeaten streak in all of MMA history. This fight was to be his third title defense.

His opponent, Californian T.J. Dillashaw, was almost unheard of, and although he had done fairly well in the UFC ring, his resume didn’t even come close to Barao’s. He was very much out of his league with this bout and the bookies had him at a 10-1 underdog.

The first round showed an impressively quick-footed Dillashaw, as he skipped in to land a punch and jump back out of harm’s way before Barao even knew he was hit. With less than 90 seconds on the clock for round one, Dillashaw landed a sweet right hand into Barao’s jaw, sending him to the floor.

Dillashaw jumped on him, and it looked like the fight might be over before it has even begun for Barao, but he managed to roll out of a choke and make it make on his feet before the bell. The Brazilian champion had been stunned and didn’t know what to do with this constantly moving creature they had placed in the ring with him.

For the next three rounds, Dillashaw dominated, mixing it up with different stances and unpredictable movements. By the fifth round, he still looked as fresh as a daisy, bouncing around the canvas like he had from the beginning, while Barao looked weary and battered.

Just two minutes into the final round, Dillashaw caught Barao with a sweet combo of a head kick, a jab, and a huge left hook, which floored the champ. Dillashaw went in for the kill and was pulled off by the referee and declared UFC bantamweight champion in one of the best fights in UFC history.

You can check out Dillashaw’s fancy footwork and finish in the fight highlights.


Matt Serra may be at the top of the UFC underdog list, and his fight for the welterweight championship the longest shot in history for a title. It was such a shocking result that 10 years later, it’s still considered the biggest upset of MMA history.

Serra came to the ring by winning season four of The Ultimate Fighter: The Comeback, the reality TV show focusing on former UFC fighters wanting a second shot in the octagon.  Matt Serra had fought just eight times in UFC previously, his last fight being UFC 53 in 2005. By winning the series finale against Chris Lytle, he won the opportunity to fight for the UFC welterweight title, which had just been won by 25-year-old Georges St. Pierre.

St. Pierre was an up and coming star of the UFC. Rising up through the ranks, he was considered the next big thing in MMA circles.

Serra the Terror Earns His Name

As the bookmakers opened bets on UFC 69, St. Pierre was at one point a whopping -1300, the huge favorite. Even Serra knew his chances were slim to none, and just wanted to make it a good fight. No one could have foretold what happened next.

Just minutes into round one Serra managed to get in a couple of swinging punches, making St. Pierre stumble. Serra “The Terror” seized the moment and jumped in for the kill with quick fire and forceful punches, at one point knocking St Pierre off his feet. The champ managed to regain his feet, but only momentarily.

Serra followed him to the mat, pounding him all the way, delivering a barrage of strikes to his head. St. Pierre’s eyes rolled in his head back at just 3:25, making it one of the most unexpected losses of his career and of UFC history.

Sometimes it pays to go against the public and the bookmakers to back the underdog. It happens more often than you might think. Don’t believe us? Check out the

Check out the Top 10 Underdog Payouts in US sporting history.