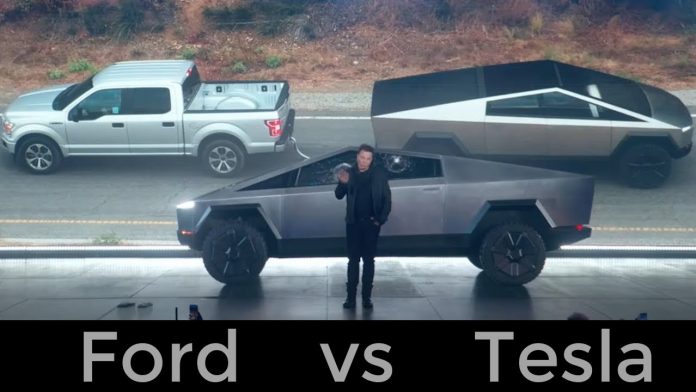 The Tesla Cybertruck made its debut last week during a live streaming media event that included a tug-of-war battle with the Ford F-150. The battle between Tesla’s Cybertruck and America’s best-selling truck immediately came under fire as a staged mismatch, with executives from Ford demanding a rematch.

Tesla’s new Cybertruck is set to face off against Ford’s F-150 in an “apples to apples” tug-of-war battle. The anticipated showdown could take place as early as next week. https://t.co/N5q8xgXIfn pic.twitter.com/IDzfn0StG0

Even with the accusations that the match was not fairly run, the oddsmakers at BookMaker.eu still have made Tesla’s Cybertruck the heavy favorite to make it two in a row in a rematch with the F-150, with opening odds of 3 to 1. Gamblers might not share Elon Musks’ confidence, as an initial wave of money supporting Ford came in to send the 3-1 favored Tesla, down to it’s current 2 to 1 price.

“The Cybertruck looked impressive, though I must admit we are doing a little bit of guesswork here,” said BookMaker auto trader James Colt. “The initial hype surrounding the Cybertruck lead us to open the price higher than we should have and we were inundated with Ford money. While I think Telsa is the solid favorite, we are going to be watching this market very closely as a real “apples to apples” showdown could be anyone’s game.

Musk’s trademark showmanship was on full display at last week’s unveiling of the Tesla Cybertruck. Unveiled amidst a host of some the most popular sci-fi vehicles in Hollywood history, the Cybertruck is marketed as somewhat of an indestructible workhorse that is able to tow up to 14,000 pounds while offering acceleration from 0 to 60 mph in just 2.9 seconds.

While the unveiling didn’t go exactly as planned, with the claims of bulletproof windows getting quickly shattered, the big buzz was created by Musk’s presentation of a tug-of-war between the Cybertruck and the F-150, with the Tesla prototype easily out-pulling the popular Ford.

The presentation was quickly discounted by industry observers and automotive engineers as meaningless, due to the clear advantages given to the Tesla offering. While the Cybertruck operated in four-wheel drive during the tug of race, the Ford was clearly operating in two-wheel drive.

In addition, based on available specs, observers have suggested that the Cybertruck entered the competition with twice as much weight over its two axles, providing it with a clear advantage over the popular Ford.

Others cited that the engine in the F-150 may have been the smaller 2.7 litre option versus the more powerful EcoBoost engine.

Looks like somebody wasn’t happy with the Tesla’s Cybertruck tug of war video with the Ford F-150.#TechNews #Tech #TuesdayThoughts pic.twitter.com/LTvWjMO6eQ

The mismatch spurred an immediate response from Ford Motor Company vice-president Sunny Madra, who challenged Musk to send Ford a Cybertruck prototype for an “apples to apples test”.

Electric motors also have insane torque. If we load both trucks to the max, electric still wins. Physics is the law, everything else is a recommendation.

Musk also received pushback from noted physicist Neil Degrasse-Tyson, who took Musk to task on the test criteria, most notably the weight each of the two vehicles was bearing.

There is no question that the Cybertruck presents as an exciting electric alternative in the competitive pickup truck market. Electric motors offer more torque in lower gears than their internal combustion alternatives, making the Cybertruck and Ford’s planned all-electric offerings poised to revolutionize the market.

Musk has been receptive to the criticism sparked by last week’s presentation, and has promised to stage an even rematch. Of course, Ford has demonstrated some showmanship of its own of late, with their demonstration of a prototype electric F-150 towing a train with a weight exceeding one million pounds.

However, Ford looks unlikely to participate in any future publicity stunt alongside its burgeoning competitor, and there is little indication that Musk and Tesla will stage a rematch that adheres to industry standard towing tests established by the Society of Automotive Engineers.

Accordingly, expect the Cybertruck to continue to hold a competitive edge over Ford while Tesla sets the rules of engagement, both in the tug of war rematch, and at the sportsbooks.