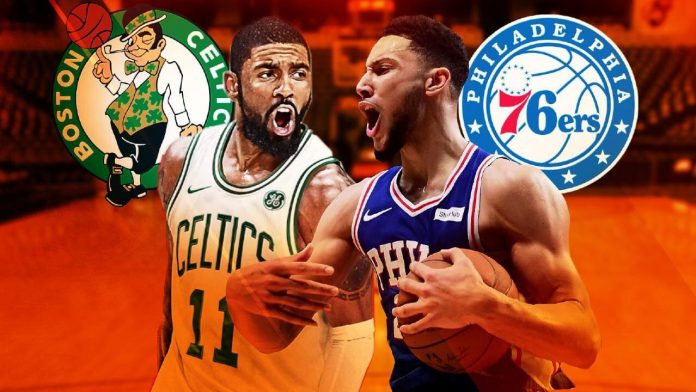 The Boston Celtics’ trip to face off against the Philadelphia 76ers is a heavyweight affair, but one of the heavy hitters won’t be participating. Celtics star Kyrie Irving has been ruled out of the matchup between these teams after spraining his knee a few days ago. The injury is not expected to shelve him for too long but Boston will need to make up for his absence in this critical showdown.

The 76ers are a game ahead of the Celtics in the Eastern Conference standings and pushing that lead to two with a win here would be a boon. Boston is going to be the underdog as it is on the road without its best player. However, the Celtics have a lot of depth and there are plenty of players that can step in to fill the void. Don’t completely discount the Celtics’ ability to pull this upset.

The Celtics have a record of 35-21 on the season. They have lost two straight games to fall behind the 76ers and the Indiana Pacers in the standings. As it currently stands, Boston would not have home court advantage in the first round of the playoffs as the No. 5 seed, which is certainly not where the team pictured itself when the year began. The Celtics are very close to Philly and Indiana in the standings so a win here would be huge. Boston is 13-13 on the road this year.

The 76ers have a mark of 36-20 on the year. They have won two consecutive games and are hoping to soon leapfrog the Pacers for the No. 3 seed in the East. Philadelphia has been fantastic at home this year with a mark of 23-6. It is easy to see why the 76ers will be the favorites.

The Celtics held a comfortable lead over the Clippers until Irving hurt his knee and then gave it all away in a surprising loss. Now they must aim to tread water until Irving can return. Luckily the All-Star Break is coming up, which should give Irving time to heal.

He is a huge piece of the equation for Boston, averaging 23.6 points, 6.9 assists and 1.6 steals per game. Irving is shooting 49.8 percent from the field and 40.9 percent from three-point range on the season. His absence will help shift the spread a couple of points.

The 76ers have pulled off 2 wins without a loss since picking up forward Tobias Harris in a trade with the Clippers. The acquisition gives Philadelphia a starting five which also includes Joel Embiid, J.J. Redick, Jimmy Butler and Ben Simmons.

Harris has averaged 18.0 points, 7.0 rebounds and 4.5 assists in the two games since joining the team. The Celtics will be poring over tape to figure out the best way to defend the 76ers now that they have added another premium talent to the floor.

Reason: The Celtics would have definitely had a chance to win this game if Irving was playing, but his absence will loom large. Boston’s defense should keep this one close, but in the end the team won’t have enough of a scoring punch to keep up with the 76ers.

Philadelphia is the pick to extend its home dominance and capture this matchup. The 76ers could be the choice to cover unless the oddsmakers really boost the spread without Irving playing. The “under” should be considered.