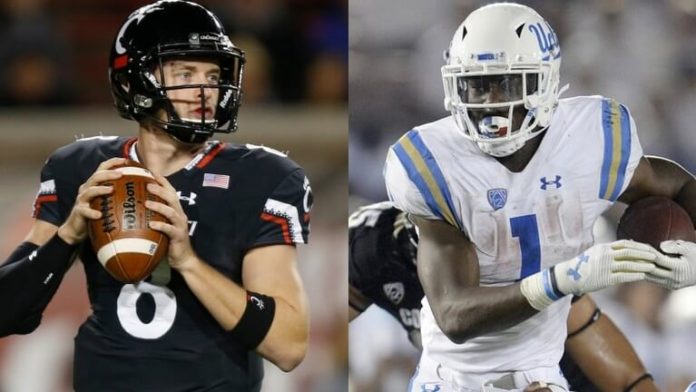 The UCLA Bruins open the season in Week 1 with Chip Kelly in a game against the Cincinnati Bearcats. Chip Kelly was a legend at Oregon before heading to the NFL. That didn’t work out so now he is back at the college level looking to dominate again.

It could take a couple years until the Bruins get the right type of recruits in on offense to run his system, but UCLA at least hopes to show some progress this year. Cincinnati struggled to a 4-8 record last season and this is a tall test going on the road in the opener against a school with a lot of tradition. It’s easy to see why the Bearcats will be the underdog.

The Cincinnati Bearcats and UCLA Bruins will face off on Saturday, September 1st, 2018 at 7 p.m. ET at the Rose Bowl in Pasadena, California. The game will be nationally televised on ESPN.

UCLA is currently being wagered on as the 14.5-point favorite. The Bearcats are getting slightly more action at that number, especially because a two-touchdown loss would still result in a cover. However, the oddsmakers know what they are doing and wanted to get some more action on Cincinnati. The Bruins are the heavy -675 favorites on the moneyline and aren’t getting much money on that number. The Bearcats are bringing in some action as +492 underdogs.

The scoring total is 64 points, as the oddsmakers believe a shootout is on the horizon. The “over” is the more popular selection, with nearly 75 percent of the money headed that way.

Kelly still has to name a starting quarterback for this game and may choose not to before the game. There is currently a three-way competition for the job, and while Kelly certainly has an idea who he is going to pick, he is keeping the decision close to the vest.

Michigan transfer Wilton Speight is one option, as is Devon Modster and the athletic dynamo Dorian Thompson-Robinson. Speight doesn’t seem to fit the zone-read scheme which worked so well for Kelly in Oregon but he does have a lot of experience. Thompson-Robinson could make the most sense long term but it remains to be seen if he is the choice right away or if he still needs to gain experience before taking over. Keep an eye on any announcement regarding this position as it could have an effect on the outcome.

UCLA gave up 287 rushing yards last season, which was among the worst in college football. While Kelly will work his magic on the offensive side of the ball, the Bruins are going to need to stop people in order to be competitive.

Gerrid Doaks is one of the Cincinnati running backs looking to take advantage with a big game. He only had the third-most carries on the team in 2017 but finished as the leading rusher with 513 yards, averaging an impressing 5.9 yards per carry.

Michael Warren II is also back and if the Bearcats’ running-back-by-committee can carve up big chunks of yardage on the ground this could be a close affair.

UCLA might not have the perfect situation at quarterback quite yet and the defense is a work in progress. Kelly is likely to get the job done sooner rather than later, but the opener could be rough. Look for Cincinnati to keep this close and cover the spread.

UCLA will at least come away with a less-than-inspiring victory at home. Take the “under” on the scoring total.