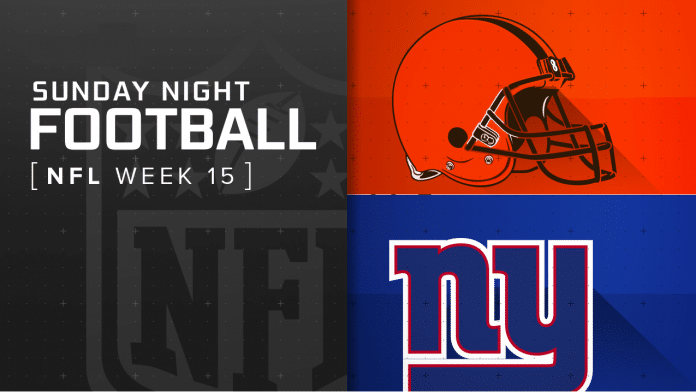 It isn’t often that we can say the Cleveland Browns and New York Giants are fighting for a playoff spot. The fact that it’s happening this season makes the Sunday Night Football matchup all the more intriguing. And another sign that 2020 has been a strange year is that this game was flexed into primetime by the network. Both teams had a four-game winning streak snapped last week, though the Browns are still among the AFC’s top-7 entering Week 15. The only hope the Giants have of making the postseason is to win the pitiful NFC East. Someone has to do it and the G-Men are a game back of the team formerly known as the Redskins.

The matchup between the Cleveland Browns and New York Giants will take place on Sunday, December 20, 2020, at 8:20 p.m. ET at MetLife Stadium in East Rutherford, NJ. The game will be televised nationally on NBC. Cleveland hit the board as a 5-point favorite with early action on the visitors moving the line to -6. The Browns’ winning streak ended in a thrilling 47-42 loss to the Ravens last week where backers suffered another blow. Positioned as a 3-point dog on the closing line, Jarvis Landry was pushed out of the end zone on the final play giving Baltimore a safety and the cover win. The Browns are just 2-6 ATS over their last eight games and have been one of the worst bets in the NFL with a 5-8 ATS ledger overall.

The Giants surged to the top of their division with their winning streak, however, the good times came to an end with a 26-7 loss to Arizona while catching 3-points. The Giants covered in five of their previous six games before that setback and overall they are 8-5 ATS. The UNDER is 5-0 in New York’s last five games against AFC foes and the total currently sits at 44. The Browns aren’t quite there yet, but a win over the Giants moves them closer to their first playoff berth since 2002, which would end the NFL’s longest current playoff drought. They already have more wins than in any of their previous 12 seasons and have looked like a legitimate force most of the campaign. In a touch of irony for a team that is just three years removed from a winless season, the Browns earned respect in a loss. Their setback to the Ravens, in one of the most exciting games of the year, was a sign that the Browns are a competitive and playoff-worthy club.

Baker Mayfield played his best ball over the last two games throwing for 677 yards while totaling nine touchdowns in his last three outings. They’ve scored 83 points against strong defensive teams Tennessee and Baltimore with the help of a solid run game. Nick Chubb and Kareem Hunt have each rushed for over 770 yards propelling the NFL’s third-best ground game. Myles Garrett can add to his sack total against a Giants team that’s allowed 41 sacks, and the defense needs to come up big after getting rattled for 82 points the last two games. The big question for the Giants is who starts at quarterback. Daniel Jones returned earlier than expected from an injury and was ineffective in the loss to Arizona, completing 11 of 21 for 127 yards in the 26-7 setback. He’s been limited in practice and will be a game-time decision. Colt McCoy, who managed a victory over Seattle while filling in, will get the call if needed. “If he’s not at risk beyond any normal game, then we’ll go ahead and give him the opportunity to play,” Joe Judge said of Jones.

The Giants need all the help they can get on that side of the football. They rank next to last in the NFL in total yards (300.1) and points (18.3) per game. Even during their recent winning streak the Giants weren’t lighting up the scoreboard averaging just 21.5 points over the four-game stretch. That shows you just how good they were defensively. And the group hasn’t been bad ranking among the top-10 in points allowed. With offensive coordinator Jason Garrett unavailable after contracting the virus, former Browns coach Freddy Kitchens will fill in as the play-caller, which should make for an interesting sub plot. If you thought New York’s recent winning streak came out of nowhere think again. In four losses prior to that run the Giants were close dropping those games by a combined 14 points while covering the spread each time. The quarterback situation is a concern, though. Jones was mauled by an average Arizona defense and McCoy’s better days are behind him, assuming he even had them. This is a game the Browns need and I expect the defense to play better with Mayfield and the offense doing their thing.