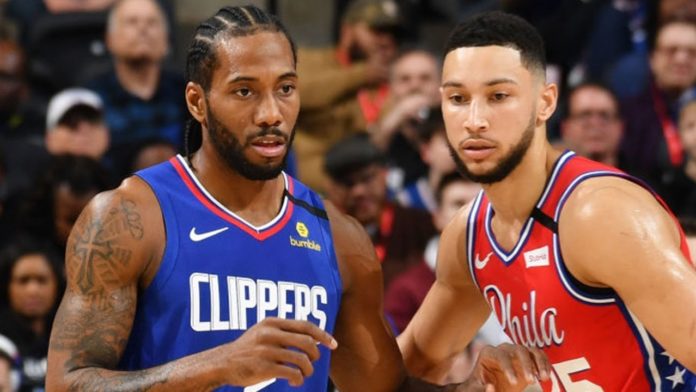 As we inch closer to the end of the regular season many NBA teams are in survival mode, trying to walk the fine line between winning games now and preserving players for the upcoming playoffs. Every team has dealt or is dealing with this conundrum. Some are managing better than others. Two teams that have done a nice job navigating the condensed season square off on Friday when the Los Angeles Clippers visit the Philadelphia 76ers in a potential Finals preview. The Clips are hopeful that’s the case because it means they would be playing for the O’Brien Trophy for the first time in franchise history.

Friday’s game will air live on ESPN with tip off at 7 p.m. ET from Wells Fargo Center in Philadelphia.

The Clippers are on a roll and they look to finish off a perfect three-game road trip. They opened the brief Eastern Conference excursion with a win over Indiana, their sixth straight while going 5-1 ATS. The middle game saw them in Detroit playing without injured Kawhi Leonard, Patrick Beverley and Serge Ibaka, while Paul George took a rest day in the second game of a back to back.

Players have been in and out of the lineup all season making the Clips record even more impressive. They are situated near the top of the Western Conference standings and within striking distance of the Jazz and Suns with an overall record of 39-18 SU and 33-23-1 ATS. They’ve been clicking offensively during the winning streak scoring at least 126 points four times and averaging 122.2 points with the OVER at 4-2.

Owning one of the best records in the NBA on their own floor, the Sixers are happy to be home after an extended run of road contests. They returned to the WFC for a showdown with Brooklyn after playing 10 of their previous 12 games on the road. Winning away from home has been a sore spot for the Sixers the last few years, but they came away with a 7-3 SU and 6-3-1 ledger in their latest round of road tilts. They entered the game against Brooklyn with a 20-5 SU and 16-9 ATS home record and they’ve beaten the Clippers the last four times they played in Philly while covering the closing line in each of the past five meetings.

The good news is that the recent injury problems don’t appear to be too serious, outside of Beverley’s hand that’s likely to keep him on the shelf for a few weeks. And Ibaka didn’t make the trip so he’s a no-go for Friday. Leonard was kept out of the last two game more for precautionary reasons, meaning there’s a good chance he’s back to face Philly. Meanwhile the Clips have been plugging along thanks to the play of George, who topped the 30-point mark for a fourth straight game by dropping 36 in a 126-115 payout win over the Pacers on Tuesday.

PG is on fire and the Clips are riding him. And he’s doing it with a toe injury that’s been bothering him. However, with a different mindset, George has played through pain to have his best week of the season for the surging club. “If I’m gonna play then don’t let it limit me,” he said of the problem. Mission accomplished. The rest of the club is helping out, too, especially Marcus Morris, who totaled 55 points in wins over Detroit and Indiana.

The Sixers are probably the healthiest they’ve been since the start of the season. They endured a number of COVID-related absences earlier in the campaign and went a few weeks without Joel Embiid, but those players are back and the team is playing superb ball maintaining the top spot in the East. They moved ahead of the Nets with a 123-117 win on Wednesday. The Sixers survived when Embiid was recently shelved going 7-3 in the 10 games he missed. Since his return Embiid is averaging over 29 points with three 30-point games. The Sixers are 5-1 SU and 3-3 ATS in those games.

With all the talent offensively it’s easy to overlook the job the Sixers have done on the other end of the court. They held three opponents to less than 100 points on their recent road trip and allowed an average of just 96.3 points. They cashed the UNDER in every game extending the streak to five in a row. They’ll have to be sharp against a strong LA team that dropped 122 on them a few weeks ago.

The Sixers showed they can win without Embiid and they get another crack at the Clippers, who beat them just a few weeks ago taking advantage of the interior when Philly’s big man was on the shelf. That was one of just three losses the Sixers endured during Embiid’s 10-game injury absence. With the club at full strength the Sixers have an opportunity to get Doc Rivers a win against his former club, and they will be motivated.