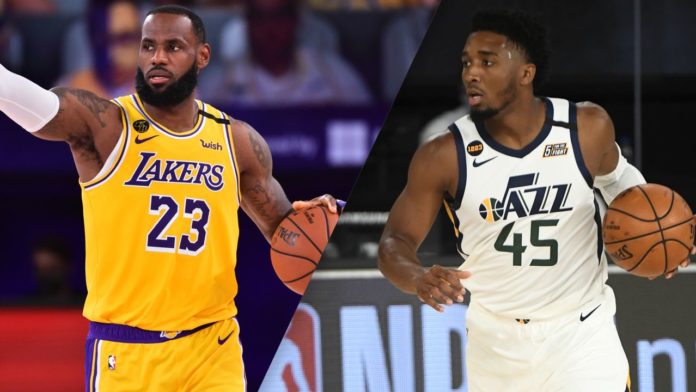 Unlike most teams in the NBA, the Utah Jazz have experienced good luck on the injury and COVID front this season. That’s allowed them to post the best record in the league as we head down the home stretch of the campaign. It’s been a different story for the Lakers, who continue along without the services of Anthony Davis and LeBron James. The Jazz own the league’s best record heading into their Saturday matinee at Staples Center but will likely face a different Lakers team if they meet in the postseason.

A stretch earlier in the season that saw the Jazz win 11 games in a row and 20 of 21 vaulted them to the top of the NBA standings and they’ve been there ever since, though the results haven’t been as dramatic. They did have another lengthy winning streak come to an end recently and they are just 3-3 SU and 2-4 ATS in their last six games ahead of a Friday encounter with the Indiana Pacers.

The Jazz snapped a four-game losing streak to the Lakers with a 114-89 home win in February with an impressive display against James. There was no AD to worry about and the Jazz had little trouble. While Jazz have cleaned up at home going 25-3, they haven’t been as good on the road. They’ve lost their last two road tilts to Dallas and Phoenix and are 16-11 SU and 13-14 ATS in away games. They’ve also dropped three in a row at LA going 0-3 ATS in those contests.

This isn’t the same Lakers team we’ll see come playoff time. They’ve gone weeks without their two best players and the results have been as expected. They did just finish a recent road trip taking two of the last three games on an Eastern Conference swing, but they sorely miss James and AD. Those two combine to average nearly 50 points per game and the offense has suffered.

Including the game about a month ago in which James was injured, the Lakers are averaging 102.2 points while going 6-8 SU and ATS with the UNDER at 9-5. Their season scoring average dropped to 109.8 points, the third lowest in the Western Conference. They continue to play strong defensively, though, which has allowed them to win a few games.

While the Jazz have fared better than most teams when it comes to injuries, they’re still not immune. They beat the Thunder on Tuesday without the services of starting forward Joe Ingles and top reserve Jordan Clarkson. Clarkson has missed four games with an ankle issue and is questionable to play against his former team on Saturday. Still, the Jazz exemplify the fleeting team philosophy and others were there to pick up the slack.

Six players average in double figures led by Donovan Mitchell’s 26.5 points. A balanced offensive attack led by a top three defense has the Jazz poised for a long playoff run. Two-time Defensive Player of the Year Rudy Gobert had seven blocks against the Thunder and averages a double-double with 14.4 points and 13.4 rebounds. Utah surrenders just 107.5 points per game behind the second-best field goal percentage defense.

When they play teams that are worse off than they are the Lakers have success. LA ended a recent seven-game road trip going 4-3 SU and 5-2 ATS with a payout over the depleted Hornets 101-93 on Tuesday. “I think all of our guys are really fatigued right now. We are stretched really thin with all of the injuries and the compact schedule. To come out of it 4-3 on this stretch, we feel good about that,” Frank Vogel said.

The Lakers need something to feel good about since it’s been a struggle without their two superstars. Since Davis went down in mid-February, the Lakers are 13-14 SU and 14-13 ATS. They built up enough of a cushion in the early part of the season to withstand a stretch of sub-.500 play. Getting more production from Andre Drummond would help the offense. He scored a total of seven points in the last two games of the road trip.

Even without a few key players the Jazz have shown the depth that’s carried them to the best record in the NBA. And they still have their top performers on the court in Mitchell, Gobert, and Bojan Bogdanovich. It is the second of a back-to-back for the Jazz so we could see some players rested with Mike Conley the most likely. I still like the Jazz to dominate against a Lakers team still searching for an identity without LeBron and AD.