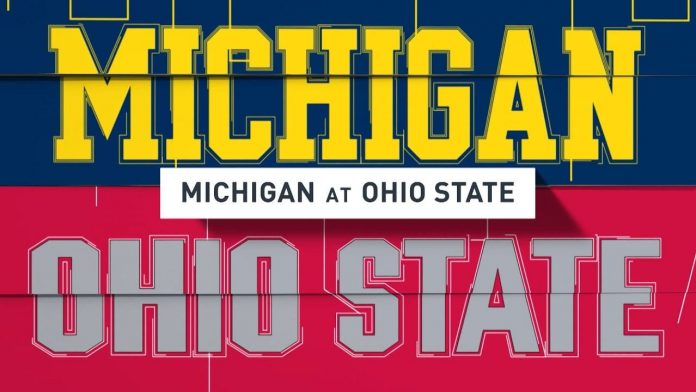 Part of the reason why Lloyd Carr never ended up lasting as the coach of the Michigan Wolverines is because he flat out couldn’t beat the Ohio State Buckeyes. For the time being, Jim Harbaugh has gotten away with the fact that he has yet to beat “Ohio” since he has arrived in Ann Arbor. But there’s no doubt that “That School Up North” is getting closer after losing to the Buckeyes in the ‘Shoe last year 30-27 in double overtime.

The 2017 edition of “The Game” has some promise for sure. The biggest issue Michigan is going to have is the fact that it has just five starters returning from last year’s team, and one of those, Wilton Speight, still hasn’t been declared as the starting quarterback for this team with just a few weeks left before the kickoff of the campaign.

Still, the Wolverines have had back-to-back top 10 recruiting classes, and the raw talent that is going to be on the field is going to be insane in maize and blue.

Though Harbaugh himself was a quarterback at Michigan, “Captain Comeback” is asking his team to play great defense and run the ball as well as possible. Speight wasn’t asked to do a ton last season, largely thanks to a defense that allowed just 261.8 yards and 14.1 points per game. Big Blue isn’t winning games in the prettiest of fashions, and that will have to be the case against the Buckeyes for sure.

Ohio State is still surely comfortable trying to do anything it needs to do offensively to put points on the board. Urban Meyer has yet to lose in the Michigan/Ohio State rivalry, and most of the games haven’t been all that close either.

All eyes are going to be on J.T. Barrett and Mike Weber in this one. These two men were both virtually neutralized in “The Game” last season. Barrett did rush for 125 yards and a touchdown, but he needed 30 carries to do so. With Curtis Samuel and his do-it-all nature gone, Weber is going to have to do a lot better against Michigan than he did last season with his 11 carries for 26 yards and a touchdown.

Perhaps we’ll see more out of Barrett as a passer, though. Johnnie Dixon has the look of one of the top receivers in the Big Ten this year, and new offensive coordinator (and former Indiana head coach) Kevin Wilson is going to be asked to open things up a lot this year because of it. We know that Barrett can do a lot, but rare is the team that figures out how to throw the ball for 300+ yards against Michigan.

The value here clearly lines with Michigan. Nothing is guaranteed for Ohio State in spite of the fact that most recognize it has top five talent and a great chance to get back to the College Football Playoff this year. Still, the Wolverines nearly pulled off a huge upset in “The Game” last year, and that came with a team that was still lacking a lot of offensive continuity.

Even though Jabrill Peppers and others are gone from last year’s top-flight defense, Michigan’s ‘D’ should certainly keep it in any game that it plays. Giving the Wolverines home field advantage and a touchdown in a series it so desperately craves a win in seems to be a lot at this point, and we could see a case where Big Blue is actually the favorite by the time this one kicks off in November.