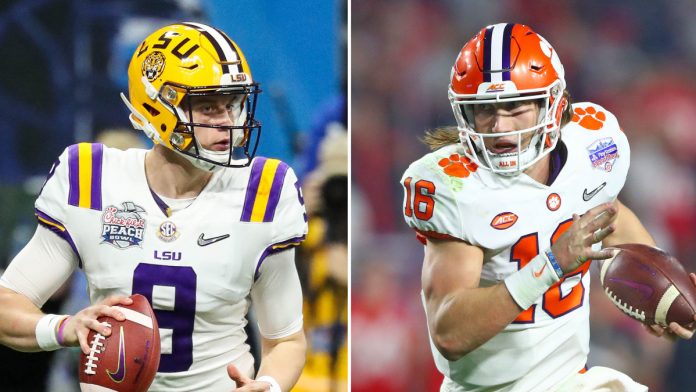 It’s been a magical season on the bayou. The LSU Tigers are looking to cap off their best regular season in school history by winning their fourth national championship on Monday night. LSU could go down as the best college football team of all-time with the victory as the Bayou Bengals have defeated seven different top ten teams this season, and a win over the defending national champions would make it eight wins. However, the Clemson Tigers are looking to make history of their own, supplanting Alabama as the preeminent dynasty in college football with four titles in three seasons.

This is not an unfamiliar place for Clemson. The Tigers are making their fourth trip to the national championship in the last five seasons, and they have been underdogs per the college football betting odds in all three games. Clemson faced Alabama in its three previous trips to the College Football Playoff National Championship Game, and the Tigers were an underdog of at least five points in all three of those games. The IPTAY Tigers covered the spread in all three of those games, besting Alabama to win it all twice behind transcendent quarterbacks in Deshaun Watson and Trevor Lawrence.

When LSU Has the Ball

Heisman Trophy winner Joe Burrow is the most successful quarterback in the history of LSU’s football program. Burrow smashed every major single season passing record at LSU this year, and he broke many SEC records on his way to New Orleans. His turnaround under the tutelage of passing game coordinator Joe Brady was remarkable, and that’s why Brady is set to receive a hefty pay raise at the end of the season.

Brady introduced schemes that he learned from Sean Payton while with the New Orleans Saints, and that has helped a perpetually moribund offense take off. Burrow is on pace to set the national single season completion record, completing 77.6 percent of his passes, and he has done it in the toughest division in football. He has thrown for over 5,200 yards and 55 touchdowns, and the bulk of those throws have gone to Jamarr Chase and Justin Jefferson.

Chase and Jefferson could both be first-round picks in the 2020 NFL Draft. They are both on pace to end the season with over 1,500 receiving yards and both players have a whopping 18 touchdown receptions. Terrace Marshall Jr. and Thaddeus Moss are frequent targets too, and this is a “pick your poison” type of passing attack.

Clyde Edwards-Helaire has over 1,700 yards from scrimmage on 249 touches to provide a versatile weapon at running back, and he could be the key to it all for the Tigers. Clemson’s front four is nothing like it was last year with Clelin Ferrell, Dexter Lawrence, and Christian Wilkins all being selected in the first round of the 2019 NFL Draft.

Clemson does have the best scoring defense in the country, but there are real concerns about the Tigers’ competition. They played in a very weak conference that only had a couple decent offenses, yet Clemson did do a good job of slowing down Ohio State in the second half of the Fiesta Bowl.

When Clemson Has the Ball

Burrow is the runaway favorite per the NFL Draft odds to be the No. 1 pick in the 2020 NFL Draft, and Trevor Lawrence is the early favorite to be the No. 1 pick in 2021. Lawrence has been on fire after a slow start to the season, taking Clemson’s offense to another level over the last few months. He has recaptured the magic that made him such a fabulous freshman, and he has two excellent targets in Tee Higgins and Justyn Ross.

Higgins has hauled in 56 passes for 1,115 yards and 13 touchdowns this year, while Ross has 61 receptions for 789 yards and eight touchdowns. Higgins is one of the scariest deep threats in the nation, but anyone is capable of taking a pass to the house with Lawrence throwing the ball. Seven different players have at least one reception of 50 yards or more this season, highlighting the nature of this big play offense.

Travis Etienne is having a standout season at running back, averaging 8.0 YPC on just under 200 carries while averaging 12.4 yards per reception in the passing game. He could be the first running back taken in this year’s draft, and Etienne might have a huge game given the struggles LSU has had stopping the run at times this season.

The X-Factor for LSU’s defense is Grant Delpit. Delpit has been heralded as the best safety in college football, and he has done a great job at reading quarterbacks throughout the year. If he can bait Lawrence into some bad throws, that could give LSU the edge it needs to run away with it.

The LSU Tigers are going to the National Championship!#GeauxTigers | #CFBPlayoff pic.twitter.com/PZTHl9TGd6

This is projected to be one of the highest scoring national championship games ever. However, title games with high totals tend to sail under the total. Oregon and Ohio State failed to be the high scoring game we expected six years ago, and the Florida-Oklahoma BCS Championship fell woefully short of the number.

With so much time to prepare, two of the best defensive coordinators in the nation will have some tricks up their sleeve and keep this game under the total. It’s hard to go against LSU given what we have seen from those Tigers this year, so that’s the best option if you are playing a side.