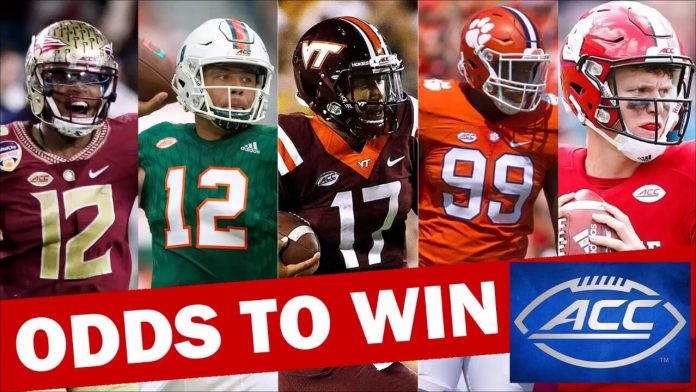 The Clemson Tigers have been one of the best college football teams in the country the past few years and are a heavy favorite in 2018 to come away with the Atlantic Coast Conference title. There are some worthy foes attempting to knock the Tigers off.

The Miami Hurricanes had an impressive year in 2017 and have the type of talent to be nationally ranked this season. The Florida State Seminoles are hoping quarterback Deondre Francois can get back up to speed after a serious injury shortened last season. The Seminoles have talent across the board and could be one of the top challengers.

The Virginia Tech Hokies are more of a longshot because they lost a lot of talent from last year’s team, but they have a solid program and there are some good players waiting in the wings. Most of the other teams are extreme longshots to win the ACC. The Louisville Cardinals were players the last couple of years but lost superstar quarterback Lamar Jackson to the NFL. His absence will send the team back to the middle of the pack as Louisville was often a one-man wrecking crew with only decent talent around him.

It would be a very notable development if teams such as the North Carolina State Wolfpack, the Georgia Tech Yellow Jackets or the Boston College Eagles were in contention. In the end, Clemson will clearly be the team to beat.

Odds To Win The ACC

Clemson is going to be a very good team this year no matter what, but stellar quarterback play could lift it into the national championship conversation. Five-star freshman recruit Trevor Lawrence is vying to be the starting quarterback, although it won’t be easy to win that job against senior Kelly Bryant who obviously has much more experience. If either quarterback can consistently move the offense this season, the Tigers could be eyeing a national title. Even at these odds, they are a good bet because it is hard to figure out a way another team surpasses them in the ACC unless Clemson  has unforeseen struggles or is hit hard by injuries.

Miami had a good season a year ago and expectations will be high with many key players back. However, the Hurricanes have some question marks at quarterback, and that is never a good thing. Nothing can torpedo a talented team faster than an erratic passing game, and because of that, Miami should not be the choice to win the division at these odds.

Florida State is the best choice among the second tier of options as it has a possible star quarterback and plenty of talent on both sides of the ball. North Carolina State is a worthwhile longshot gamble at these odds. They have a star quarterback in Ryan Finley and while the overall talent doesn’t match up to teams at the top, there are times a golden arm can lead a team to some upset wins.

It would be a surprise if Clemson doesn’t win this conference again because it has a fantastic defense and weapons offensively. The Tigers are so deep across the board that they must be the pick even at odds that won’t result in a huge payout. When it comes to the ACC Championship, it is best to play it safe with one of the most talented teams in the country.