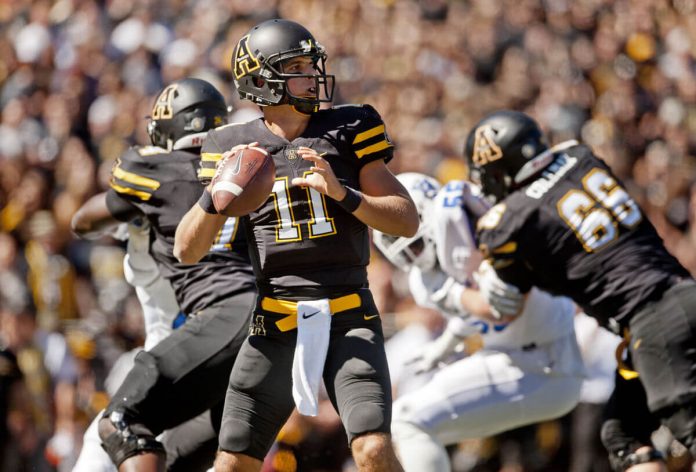 When you think about the Appalachian State Mountaineers, the first thing that comes to mind is the fact that they were able to upset a top five team in the land a decade ago when they took out Michigan at the Big House. Alas, the Mountaineers have quietly transitioned into FBS and won 28 games over the course of the last three seasons. The Sun Belt hasn’t seriously had a chance to crack into the New Year’s Six yet, but we aren’t so sure this year might not be different. Appalachian State has the ability to truly be special this season.

It all starts under center for the Mountaineers. Taylor Lamb has won 27 games as a starting quarterback. He isn’t a gunslinger, but he keeps careful care of the football and should improve upon his 15 passing touchdowns from last season. He’s a mobile quarterback and isn’t afraid to take off, nor are the Mountaineers afraid to call his number by himself.

Keep in mind that App State also had a pair of 1,000-yard backs last season in Jalin Moore and Marcus Cox. Cox is gone, but Moore, the reigning Sun Belt Offensive Player of the Year, is back and should be a threat for 2,000 all-purpose yards this year. Terrence Upshaw had high hopes as the top runner in this offense last year, but he was suspended with academic issues. With Upshaw and Moore, the Mountaineers might have the best 1-2 punch of running backs amongst mid-majors.

Appalachian State is bringing back three of its five offensive linemen from last season’s team that averaged a whopping 256.9 rushing yards per game, and that experience should be helpful in Sun Belt play this year as well.

The Mountaineers run a 3-4 defense, and all three members of that line from last year are back. Sure, both Kennan Gilchrist and John Law are gone, but Eric Boggs is already projecting out to be one of the best defensive players in the Sun Belt at inside linebacker. Rashaad Townes is an NFL talent in the making, and he has raw talent, albeit without much in the way of experience.

The bottom line for Appalachian State is that it probably has seven or eight wins in the bag without even flinching. The team has won 20 of its last 22 games in the Sun Belt over the course of the last three seasons, and it has won back-to-back bowl games.

If App State can win seven of its eight games in conference once again this season, a non-conference game against Savannah State will surely give it an eighth win. At that point, we need just one more victory, most likely against Massachusetts in Amherst, to go over the total.

Simply put, this is just too good of a team to avoid. The Mountaineers have a legitimate chance of running the table, and we think they’re going to give Georgia a really hard time “Between the Hedges” to kick off the season. Even if that game is lost, Wake Forest is probably going down when these two teams meet in Boone at the end of September. We can’t see anyone else on this schedule favored over the Mountaineers, and that alone gives us some tremendous value.