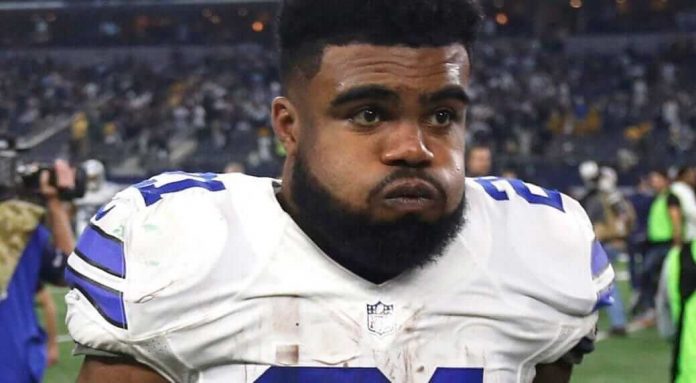 The Dallas Cowboys were delivered a huge blow on Friday when Roger Goodell handed down a six-game suspension to star running back, Ezekiel Elliott. Elliott earned his suspension for violation of the NFL’s personal conduct policy stemming from multiple allegations of domestic violence. Though charges haven’t been brought upon one of the top backs in the NFL, Elliott has still been charged in the court of Goodell.

Obviously the appeals process will go into play in the next week or two, and that could alter this suspension. If history is any indicator, though, Elliott is looking at a start time to his season somewhere in October, and that could be horrible news for the Cowboys.

In the grand scheme of things, a running back isn’t worth much when it comes to the point spread in the NFL. The oddsmakers suggest that Elliott is worth a half-point at best even though Dallas clearly isn’t as good of a team without Elliott.

The bigger concern about the Cowboys is how their futures odds are panning out. Once as low as 10 to 1 to win the Super Bowl, Dallas has been reduced to just +1300. In theory, once the Cowboys get into the playoffs, none of this suspension stuff from the start of the year will matter no matter how many games Elliott ultimately sits out; just ask Tom Brady and the Patriots what it mattered in 2016 when the future Hall of Famer was suspended for four games for his role in the Deflategate incident.

That said, unlike that New England team that probably would have won the AFC East without Brady taking a single snap all of last year, this Dallas team is no lock to play football in January. Let’s not forget that the very first game Elliott is scheduled to miss is at home against the Giants. The Cowboys did get swept by the Giants last season and still captured the No. 1 seed in the NFC, but the likelihood of that happening again is slim should the G-Men once again capture the home-and-home series.

Taking a glance at the rest of the schedule ahead, Elliott is scheduled to be suspended for games against the Broncos, Cardinals, Rams, Packers and 49ers.

Not surprisingly, with Dallas taking a step backwards on the Super Bowl odds, the price on the Giants changed as well. New York was a +2300 relative longshot to capture the Lombardi Trophy for the third time in the Eli Manning era. Now, the Giants are +1800.

In other corresponding Super Bowl odds movement, the Patriots went from +310 down to +300, while both Green Bay and Seattle edged slightly ahead of Dallas from +1100 to +1000.

Even more interesting are the odds to win the NFC East. Dallas was a relatively convincing favorite at +130 before news of Elliott’s suspension. Now, both the Cowboys and Giants are the co-favorites to win the NFC East title at +200, while Philadelphia is just behind at +250.