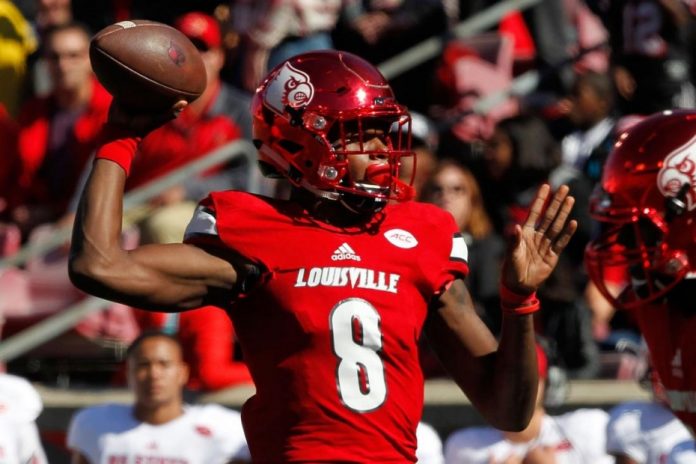 Lamar Jackson took the whole college football world by storm on September 17. The Louisville Cardinals blew out Florida State 63-20 in a game that wasn’t nearly as close as the final score would have indicated. Jackson threw for 216 yards and a touchdown and rushed for 146 yards and four scores, and from that point forward, he was the overwhelming favorite to win the Heisman Trophy.

Win the Heisman, Jackson did, and now, he’s faced with the opportunity to become the second man to ever win the honor twice.

History, though, isn’t kind to those who have that shot. There’s a reason why Archie Griffin still stands alone as the only two-time Heisman winner. We got a glimpse of that at the end of last season when Jackson devolved from a man who was literally unstoppable with his arm and his legs to one who was seemingly easily contained and was just another mobile quarterback without a good enough arm to succeed at the highest level.

The Cards were held to just a total of 57 points in their final three games of last season, falling from a team that had a legitimate shot of playing in the College Football Playoff to one that ultimately barely finished in the Top 25.

Has the book on Jackson now firmly been written? You could argue for that for sure. His decay in the final few games of the campaign was no accident. He was being blitzed more often and challenged to make quick decisions, and when his reads weren’t there and he didn’t have any room to make plays with his legs, he was essentially left helpless.

It didn’t help that Jackson played behind the worst offensive line in the ACC, one which allowed 47 sacks a year ago. Things don’t look any better this year, though former Florida assistant coach, Mike Summers was brought in to try to help.

But maybe the most damning factor for the Cardinals this year is the fact that Bobby Petrino has already declared that he’s going to work on making Jackson a pro prospect. What made Louisville so good last year was Jackson’s ability to make things happen when he was in and out of the pocket. If Petrino is going to ask Jackson to stand in and make throws, he’ll have to improve upon his 56.2 percent completion percentage for sure.

The Cards are no lock to beat Purdue in Indianapolis on the opening week of the season, and games at North Carolina and home to Clemson aren’t likely to be survived either. The best case scenario for Louisville is 2-1 as we see it in that stretch. There are still dangerous games at N.C. State and Kentucky, and most assume that Florida State will repay the favor from last year’s game when these two teams meet in Tallahassee on October 21.

Even though the ACC schedule isn’t the hardest, we’re not sure that Louisville is anything much more than ordinary. This was a team that got fat off of a bad schedule last season and made tremendous headlines by blowing out Florida State. We have a really tough time envisioning this team winning 10 games to beat us with this schedule. Nine is the absolute ceiling as we see it.