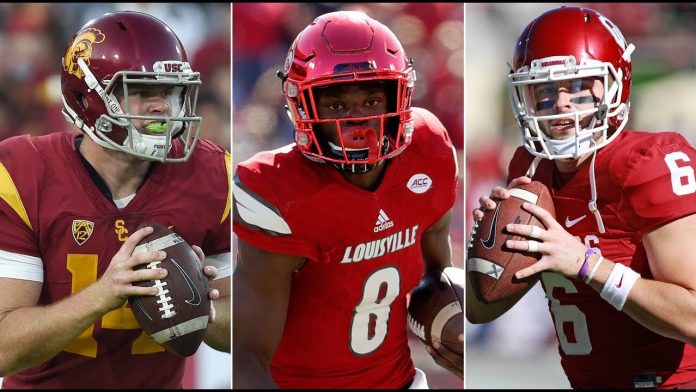 College football season is almost here and oddsmakers have already come out with odds on who will be starting quarterback for some of the big teams.

The most high-profile battle is the one going on at powerhouse Alabama. Jalen Hurts led the Crimson Tide to the national championship game a year ago, but after the team fell behind, Tua Tagovailoa came in and rallied the team to victory for the title. Both quarterbacks have returned and are competing for the starting spot, with Tagovailoa the heavy favorite to win the job.

There is a close battle at Florida State, in which Deondre Francois is aiming to hold off James Blackman. Florida has a quarterback battle in which Feleipe Franks is the favorite but is no given to be the starter.

Arkansas, LSU, Notre Dame, Ohio State, Texas A&M, UCLA and USC are among the other high-profile programs that are looking to replace their quarterbacks are are looking for a quarterback to seize the starting reins.

College football coaches have to make a lot of big decisions but anointing the correct starting signal-caller is among the biggest. Most of the starters should start coming into clear focus in the next couple of weeks.

There are a lot of big-time programs looking for their next quarterback. Alabama has the quarterback battle that has gotten national attention. Hurts spoke out in frustration recently, and while coach Nick Saban said that won’t have any effect on the competition, it seems to point toward Tagovailoa behind ahead in the battle.

UCLA has an interesting competition going on. Josh Rosen was drafted in the first round and his replacement would love to have similar success. Wilton Speight transferred from Michigan and has the most experience among the signal-callers, but doesn’t exactly fit the mold of a Chip Kelly dual threat quarterback. With that in mind, last year’s backup, Devon Modster, is the right pick and at good odds since there is no clear favorite.

Kyler Murray is in an interesting position at Oklahoma. He was drafted by the Oakland Athletics and given a big signing bonus but was allowed to return to the Sooners to play one more football season. Murray is the favorite to take over for Heisman Trophy winner Baker Mayfield. Murray looked good in his chance to see the field in 2017 and should win the job as he is an ultra-talented player.

There could be a possible upset brewing at Florida State. Deondre Francois was the starter last season but suffered a serious injury to his patellar tendon which sidelined him for the year. He has talent but if the injury is an issue it could allow for James Blackman to grab the starting spot.

There is no reason to waste time making wagers on some of the competitions which have clear favorites. Brandon Wimbush is clearly the front-runner for the Notre Dame job but at -3500 he has tremendous odds and it doesn’t pay off anything to be correct.

Morsels of information about all of these competitions should trickle out daily at this point so keep up to date on the latest news when making the wagers.