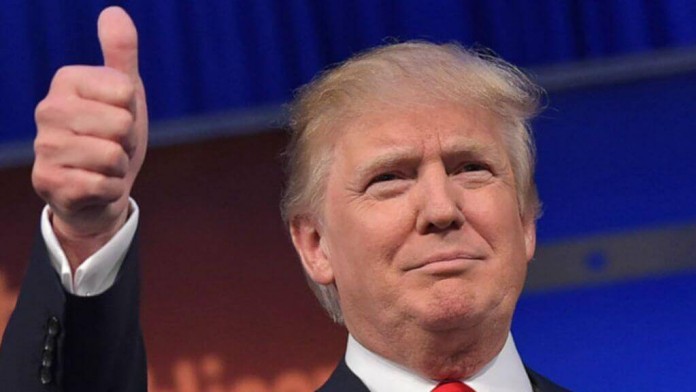 When Donald Trump announced his candidacy for the Republican Party nomination, virtually everyone not named Trump scoffed at the idea and thought there was no possible chance for him to win the nod.

Oddsmakers listed him as high as 50-1 to be the Republican Party candidate and some thought that wasn’t generous enough. Now that Trump is a -380 betting favorite to win the nomination, it’s time to delve into his background and voyage into politics.

How Did Trump Become So Popular?

Donald Trump is best known as a real estate mogul who wasn’t afraid to voyage outside of property after making his fortune. He followed his father into real estate, but branched off into other pursuits shortly after making his fortune. Trump has forayed into everything from football to casinos, golf courses to beauty pageants, universities to steaks, but the two things that kept him in the limelight in the 21st century were television and branding.

The Apprentice was one of the peaks for reality television in the 2000s and Trump used the show as a springboard to make himself a household name once again.

His acerbic tone and behavior became an instant hit with viewers as Trump crafted a reputation as someone that never held back. Anyone who has paid an ounce of attention to Trump’s campaign can see the personality he crafted as host of The Apprentice on full display.

The Donald has also done a fantastic job of branding himself and associated his name with wealth and prestige. Trump has leased his name to dozens of different ventures over the last few decades, some successful, some wildly unsuccessful, and he has been roundly criticized on late-night talk shows, due to the spectacular failure and lawsuits associated with some of his brands.

Since he announced his candidacy, Trump has dominated the news cycle and other candidates rightly criticized the media on how much attention Trump was getting.

Even before he was ahead in the polls, Trump received a disproportionate amount of coverage in the media and future political analysts will rightly wonder whether or not his extended time in the spotlight helped his chances.

The conventional wisdom is that the more media coverage a candidate receives early on in the cycle the worse it is for his or her chances to win the nomination. However, in a year that hasn’t gone according to plan by any stretch, Trump has thrived and his numbers have grown with the coverage.

Why Is Trump So Different From Other Republican Candidates?

His popularity with Republicans is curious, considering that he doesn’t fall anywhere on the spectrum of a typical Republican and in the past Trump always identified more as a Democrat than a Republican. Fivethirtyeight identified the GOP candidates back in September by the five major constituencies that we had seen within the Republican Party (Moderate, Establishment, Christian Conservative, Libertarian, and Tea Party).

First, the hope was that Marco Rubio could get enough support to knock off Trump but his hopes ended after Trump beat Rubio in his home state of Florida by 18.7 percent of the vote. Now, the establishment have rested their hopes on Ted Cruz, a candidate who would be seen as an extremist in any other year.

What Are Trump’s Odds in the Weeks to Come?

There is good news and bad news for Trump on the states to come. The bad news is that many of the delegates left up for grabs will be from states with higher levels of income and education, constituencies that Trump hasn’t done nearly as well with.

The good news is that Trump has a higher base level of support than other Republicans and more than half of the upcoming primaries are winner take all or winner take most style primaries, meaning candidates receive a disproportionate number of votes based on their vote total.

This is how presidential elections are decided and it’s not a big problem in a two-party, two candidate system. However, when there are three or more candidates take part in a system like this, this system leads to unbalanced results.

If Trump wins the Republican nomination, can he actually win the presidency? Right now the Donald Trump odds are that he’s a +340 underdog to win the presidency, but those odds probably aren’t high enough. Trump won’t fare as well in a national election where young people and minorities, who by and large aren’t Republican, join the electorate.

Trump winning the Republican nomination would also lead to a Get Out to Vote campaign for the 2016 presidential election, the likes of which have never been seen before, and minorities will overwhelmingly vote against him. Barring another scandal or being indicted for charges, Hillary Clinton would waltz over Trump in a general election.

How can you make sense of election predictions? We let you in on the secrets in 2016 Presidential Polls: Everything You Need to Know