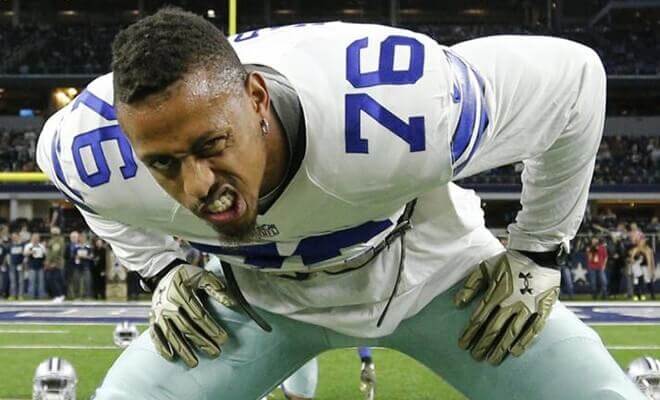 In 2013, Greg Hardy was named to the NFL Pro Bowl and selected second-team All-Pro after a season where his NFL odds were great, recording 15 sacks. In 2017, we might see him inside an MMA cage.

The former Carolina Panthers and Dallas Cowboys defensive end recently stated to MMAFighting.com that he’d been training at a Dallas-area gym for months and was planning to transition to pro fighting. The move comes after Hardy’s 2015 suspension for a domestic violence and his failure to sign with a new team this offseason.

“I’m very focused and excited to start my MMA career,” Hardy told MMAFighting.com. “I’m going to do this the right way, I can assure you of that.”

Other Notable NFL to MMA Transitions

Hardy isn’t the first former NFL player to fight inside the cage. Michael Westbrook, Johnnie Morton and Marcus Jones all tried their hand in MMA. Their results are uninspiring.

Westbrook, a former wide receiver, has a career 1-1-1 record, and was most notably knocked out by current heavyweight contender Travis Browne in 2009.

I remember being ringside for Johnnie Morton’s first and only MMA fight in 2007 – the former wide receiver was carried off on a stretcher after a first round knockout courtesy of Bernard Ackah. Marcus Jones competed on a season of The Ultimate Fighter, but his colossal size could not make up for his lack of conditioning and fighting agility.

The only success NFL-to-MMA success stories are two-time Pro Bowl running back Herschel Walker and Matt Mitrione. Walker won his only two bouts, although both his opponents were scrap heap fighters. Mitrione, who played two seasons with the Vikings and the Giants, has been a fringe top-10 fighter for years since coming out of The Ultimate Fighter.

We can’t really compare Hardy to Westbrook, Morton or Herschel Walker. They were skill players with lithe frames. Marcus Jones is 6’6” and nearly 300 pounds, but he was already 36 when he made his pro debut. Mitrione is the closest comparison we can make with this parallel, as he was a defensive end who weighed 300 pounds during his NFL career.

Instead, we should look toward Brock Lesnar, a crossover star from another sport. Like Lesnar, Hardy is a massive human being with explosive athleticism. At 6’3” with a walkaround weight of 280+ pounds, it’s likely that Hardy could simply physically overwhelm a number of heavyweight scrubs.

Will Hardy Be Among Future UFC Picks?

What’s more, Hardy is just 28 years old. For sure, that’s old to start training in MMA, but he is at least in his physical prime. It’s still a much better situation than CM Punk making his UFC debut at 37. Lesnar made his first octagon appearance at 32 and was the champion about a year later.

But where the Lesnar comparison ends is in their backgrounds. Lesnar was a D-1 wrestler, and there is a long tradition of collegiate wrestlers finding great success inside the cage. Hardy might know how to tackle, but the nuances of takedown and top control are a completely different story.

The Only Thing That Matters

Hardy might never be a contender, but that matters little to the world’s top MMA promotions. Any fight with him on the card is going to sell a ton of tickets and draw even more viewers. That’s the case with any crossover star, be it from WWE or the NFL or Olympic wrestling. And the fact that Hardy is a giant human being makes him an even more compelling figure for MMA odds.

Expect a bidding war for Hardy’s services. Just don’t think that he’ll be thrown against contenders right away. Dana White or Scott Coker know that he’s much too valuable to tank his stock by feeding him to the Stipe Miocics of the world right away.

Instead, we’ll probably see him against some fringe fighter – and a lot of MMA betting fans are going to be itching for that fight anyway.

For more MMA news, check out Early UFC 205 Odds and Fight Facts or take a look at the latest MMA odds.