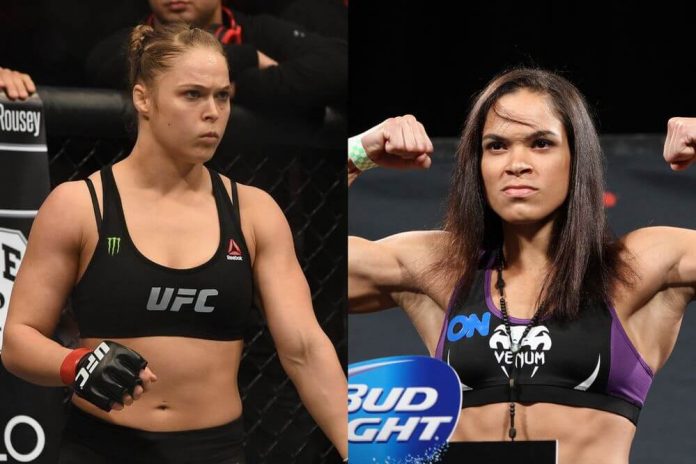 Move over, Conor McGregor. The UFC’s “other” biggest superstar, Ronda Rousey, is coming back. And she’s getting a title shot right away.

UFC president Dana White announced Rousey’s return yesterday on “The Herd” with Colin Cowherd on FS1. “The thing that everybody has been waiting for, for a good year, Ronda Rousey is back.” White said. “She will fight December 30 for the title.”

The former bantamweight queen will meet current champion Amanda Nunes at UFC 207 on a Friday at the T-Mobile Arena in Las Vegas. The main card airs on pay-per-view following the FS1 prelims. The rest of the card has yet to be finalized.

Major oddsmakers were quick to release money lines for Rousey vs. Nunes, and Rousey opened as a significant favorite, according to the UFC 207 odds at BookMaker.eu.

It’s a bit surprising that Rousey is such a massive favorite in the UFC odds. She was absolutely demolished by Holly Holm, and it will have been over a year since she last fought come fight night. Still, oddsmakers have to account for “Rowdy’s” prior accomplishments, which included a 12-0 run where she finished all of her opponents inside the first round.

Nunes is accustomed to coming in as an underdog. In her most recent fight, the Brazilian was as high as +274 before she upset Miesha Tate to win the belt. Against Valentina Shevchenko, she opened as a slight +100 favorite. At UFC Fight Night 73, Nunes closed at +200 against Sara McMann.

What Can We Expect From Rousey?

This is the million dollar question. Was she exposed by Holly Holm as a completely one-dimensional fighter, or was it just a horrible stylistic matchup for Rousey?

Here’s what we do know. Ronda Rousey was eating apples again in March. Production for her two upcoming movies, a Road House remake and Mile 22, finished earlier this year. That gives her ample time to train for a comeback in the sport where she became a star.

Ronda Rousey Odds of Leaving a Trail of Destruction

But part of what makes her return so compelling is the manner in which she lost. Rousey looked untouchable for her entire career, so it was a shock to see her get beaten so handily by Holm.

It raised legitimate questions about the abilities of her coach, Edmond Tarverdyan. It doesn’t help that Tarverdyan’s other fighter, Travis Browne (Rousey’s boyfriend), appears to be rapidly declining as a mixed martial artist under the tutelage of the Glendale Fighting Team coach.

But how can we forget the destruction that Rousey left in her wake? Nine of her 12 wins came in less than a minute. And many of those victories came against top-10 fighters like Cat Zingano, Alexis Davis and Miesha Tate. The possibility that Rowdy recaptures that form makes for compelling theater.

The Brazilian might be the most slept on champion in the UFC. She is arguably the division’s best striker and a BJJ black belt to boot. That’s important for two reasons: 1) Rousey’s rudimentary striking proved to be fatal against a high level boxer and 2) Rousey’s dominance was built on her ground game.

If this turns into a standup bout, we have to give the edge to Nunes, who just made Miesha Tate look like an amateur in that phase. If it goes to the ground, the champion has years of grappling training to draw upon. There is no clear path to victory for Rousey, while there appear to be several legitimate options for Nunes.

Rousey vs Nunes: Should You Take the Underdog?

Nunes at +220 offers fantastic value in the fight picks. She appears to be peaking as a fighter, and on paper holds a significant edge in the standup. While her gas tank will always be a question, Rousey’s cardio is questionable as well. For now, take a shot on Nunes to win – people are sleeping on how good she really is.