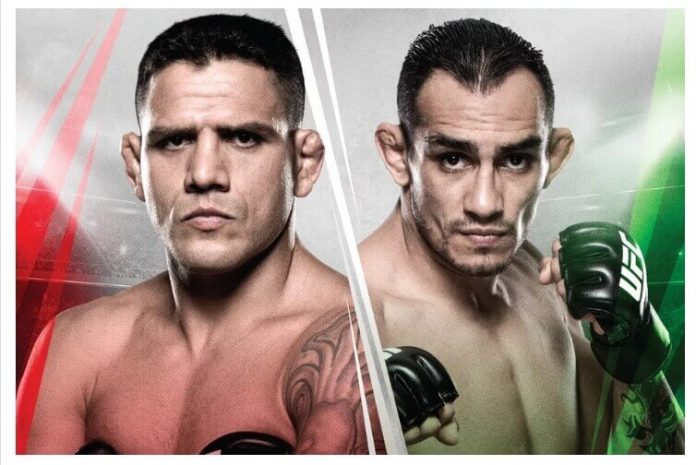 If you’re not excited about the promised violence between Rafael Dos Anjos and Tony Ferguson in this Saturday’s main event, then you’re not a fan of mixed martial arts.

Both men are exciting strikers with vastly different approaches. Dos Anjos is a textbook Muay Thai machine who picks apart opponents with the precision of a serial killer. Ferguson is an unpredictable wildman who specializes in chaos.

Need another reason to get hyped? This could easily be a lightweight title eliminator, as Dos Anjos is just one fight removed from losing the title and Ferguson has won weight straight, having long ago proved his worthiness as a contender.

Let’s take a look at your betting options and pick the best values, courtesy of the UFC odds at BookMaker.eu.

The Case for Dos Anjos

Under Rafael Cordeiro at Kings MMA, Dos Anjos has become one of the most dangerous strikers in the division. We saw the effect of his crisp low kick on Nate Diaz, as the Brazilian left the durable Stockton fighter hobbling like a one-legged zombie after just one round.

Dos Anjos throws crisp kick-punch combinations, and his perfect technique magnifies knockout power. It takes a lot to knock out Benson Henderson and Donald Cerrone, yet Dos Anjos did so inside of one round. Additionally, he plants himself right in the pocket, making opponents extremely uncomfortable and baiting them into making striking errors.

His recent success on the feet almost makes you forget that he is a third-degree black belt in Brazilian jiu-jitsu. In fact, his mastery of the ground game is what got him into the UFC in the first place. However, it wasn’t until he evolved his standup that he became an elite contender.

Ferguson is used to be being the aggressor, so the pressure that Dos Anjos applies could throw “El Cucuy” off his game. An underrated wrestler, the Brazilian could also win rounds with timely takedowns and offensive grappling.

The Case for Ferguson

Nobody knew how good Ferguson would become after winning The Ultimate Fighter in 2011. Ferguson graduated from the show as a fairly basic but effective boxer. Good athleticism and even better cardio indicated that he had a high ceiling. But now, he’s morphed into one of the most eccentric fighters in the division.

One can only describe his offensive style as unpredictable. He is constantly switching stances and throws unorthodox strikes out of each. That includes piercing elbows, kicks at all levels and a ton of spinning stuff for good measure. And that approach isn’t just limited to strikes. Against Edson Barboza, somersaulting for leg locks was an actual part of his strategy.

Perhaps the most effective part of Ferguson’s offense is not that it’s unpredictable, but relentless. An endless gas tank gives him to the ability to fight balls-to-the-wall for three straight rounds, and it noticeably exhausts fighters mentally and physically.

Though he’s never been in a five round fight, Ferguson looks as fresh in the third as he does the first. He shouldn’t have any trouble fighting for 25 minutes.

Remember, this fight takes place in Mexico City. At more than 7300’ above sea level, energy conservation and cardio will be crucial deciding factors. Though Ferguson’s style necessitates much more energy usage, he has the stamina to maintain it. We might see a more conservative “El Cucuy”, but his wild style and durability will likely steadily wear Dos Anjos down.

Plus, Ferguson is three inches taller than Dos Anjos. The former champion loves to stay inside the pocket, but he’ll have to wade into Ferguson’s range to be able to throw effectively. That puts him in all sorts of danger.

At fight odds of +120, Ferguson is a solid play in a matchup that already favors him in a variety of ways.