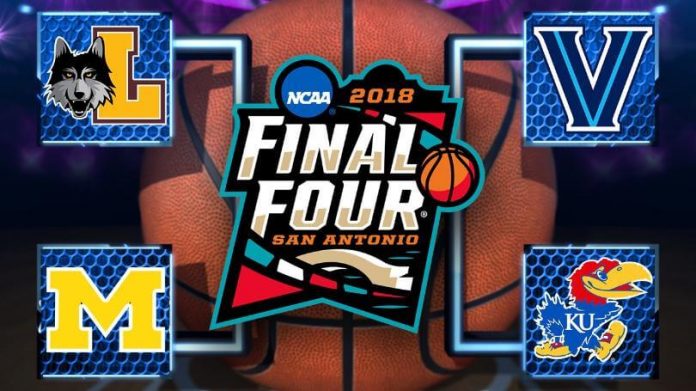 The Loyola-Chicago Ramblers and Sister Jean were never supposed to get this far. Do they have more Cinderella magic remaining? Loyola-Chicago is the biggest underdog among the remaining teams to win the national championship.

Nobody had the Ramblers getting this far and the team continues to defy the odds. If Loyola-Chicago can somehow rattle off two more victories it will result in a lucrative payout for those who continued to believe. It would be an incredible story but there are three strong high-major programs that will be in the way.

The Villanova Wildcats cruised their their region and will be the team to beat in the Final Four. Villanova has won every game in March Madness by double digits and has the look of the most dominant team remaining in the field.

While the Wildcats look good, they are facing the second-best team remaining in fellow No. 1 seed the Kansas Jayhawks. Kansas was actually the underdog in its Elite Eight game against Duke but picked up an overtime victory to advance.

Loyola-Chicago matches up against a Michigan team that won the Big Ten tournament and has carried over that success to March Madness. The Wolverines have the easiest matchup considering Villanova and Kansas are on the other side of the bracket, but many teams have said that during the tournament and Loyola-Chicago keeps knocking them all off.

We’ll have NCAA odds at BookMaker.eu available for this and every game on the NCAA Saturday schedule.

Villanova is the odds-on favorite while their high-major counterparts have decent odds. Loyola-Chicago, meanwhile, is an extreme longshot at +1251 to win the national title. The Ramblers are a No. 11 seed so they have been the underdog in every round yet have won four games to get to this point. They are only five-point underdogs against Michigan with a moneyline of +199 so it’s not impossible at all for Loyola-Chicago to advance to the title game. The hard part would be knocking off either Kansas or Villanova for the championship, but anything can happen in a 40-minute contest.

Villanova has odds of -104 to win the national championship as most people believe this team will be the one cutting down the nets at the end of the long weekend. The Wildcats are five-point favorites to knock off Kansas in the semifinals. The Wildcats are listed at -235 on the moneyline to capture the Final Four matchup and move on to the title game. Villanova would be a larger favorite in the championship game against Michigan or Loyola-Chicago.

Michigan has the next-best odds among the Final Four at +246. The Wolverines have a lower seed than Villanova and Kansas but gets the Ramblers while the two No. 1 seeds face each other, which is why they have better odds than Kansas to win it all. The Wolverines are five-point favorites against Loyola-Chicago in the Final Four. Michigan is a -240 favorite on the moneyline to win and make it to the title game.

Kansas has the third-best odds at +350. The Jayhawks are interesting because while they are the underdogs in the semifinals, they would be favored against Loyola-Chicago or Michigan in the championship game. The hard part, of course, is pulling off the upset of Villanova to make it there. The Jayhawks are listed as the +195 underdogs. Kansas wasn’t given a ton of respect in the Elite Eight and came away with that win and would love to knock off another favored team against Villanova in the Final Four.

As enticing as the odds of Loyola-Chicago are, it’s too tall of a task to knock off two straight teams that are so highly-rated. The Ramblers are a great moneyline choice in the Final Four as their journey could very well continue with a win over Michigan.

However, Villanova has proven to be the best team in the country from start to finish and the Wildcats will deliver with the national championship. While the odds aren’t great, this is the team to choose in NCAA basketball wagering.