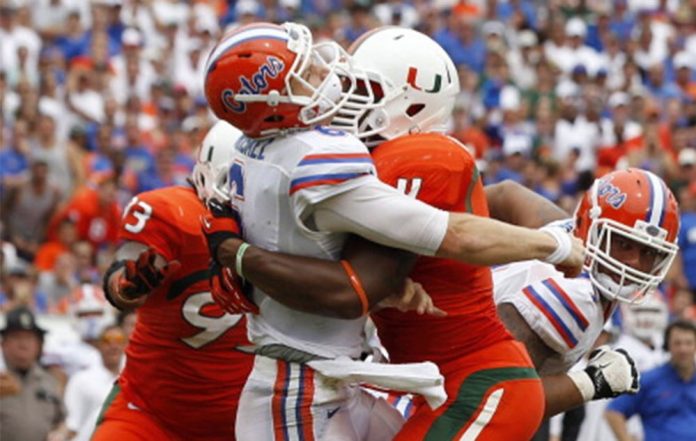 It is time for college football, as the first game of the season takes place on Saturday night on ESPN, as the Miami Hurricanes take on the Florida Gators. Saturday is kind of an appetizer with just two games on the schedule, as the full college season really begins on Thursday. The Hurricanes and Gators will get the full spotlight at Orlando’s Camping World Stadium. The Gators come into this game ranked No. 8 in the country and they are laying about a touchdown against the Hurricanes.

The Gators were a really good team last year, going 10-3 SU and 9-4 ATS and many people are looking at them as a team that can take the next step. Head coach Dan Mullen said he wants the country to see that his program is a national power. “What are they going to see? What’s our stamp?” Mullen said to the media, “When every college person in the country turns on their TV, what’s their thought when they see the Florida Gators? We have to go out there and live up to that on the field. Everybody is watching. What do you want them to think about you?”

The Florida players believe they can take the next step. “Last year we were kind of still learning,” receiver Josh Hammond said to the media, “We didn’t know what to expect as far as results-wise. I think now that we’ve done it, you know we put up a 10 win season and a New Year’s Six bowl and we’ve seen those results happen, I think the expectations will be a lot higher being that we’ve done it once already.”

The Hurricanes were nothing special a year ago, going 7-6 SU and 5-8 ATS. They will have a new head coach this season in Manny Diaz who takes over after serving as the defensive coordinator last season. The Hurricanes are not expected to be a top team this season, but they have the advantage of playing in the Coastal Division of the ACC and there is no reason Miami can’t contend. Whether or not they can be successful will in large part be determined by their quarterback. Redshirt freshman Jarren Williams won the starting job and he faces a very difficult first test.

It was thought that Ohio State transfer Tate Martell would win the job, but Martell might not even be the backup, as N’Kosi Perry could get the backup job. Diaz said that Martell might be switched to receiver.

If Miami is going to be competitive in this game then they have to find a way to move the ball. It won’t be easy, as new quarterback Jarren Williams will be going against All-SEC cornerback CJ Henderson and former Freshman All-SEC cornerback Marco Wilson who is coming back from injury.

The Hurricanes also need to protect Williams and it won’t be easy, as Florida has defensive end Jabari Zuniga who has 15.5 career sacks. He could end up being matched up against true freshman Zion Nelson who is at left tackle.

Do you really want to take a redshirt freshman quarterback in his first game against a stout defense? I’ll lay the points and take the Gators and I will also play the game to go under the total.