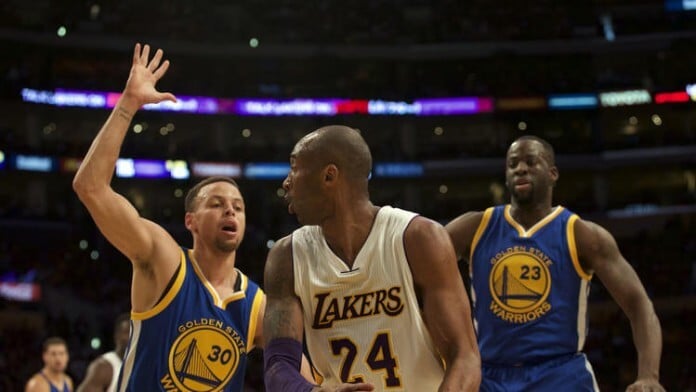 Upsets happen on a daily basis in the NBA, but upsets like the Lakers vs Golden State game occur once in a lifetime…literally.

The 2015-16 Golden State Warriors are already being anointed as one of the best teams, if not the best team in NBA history. They entered Sunday 55-5, the best start through 60 games a team has ever accomplished. ESPN’s BPI estimated they had more than a 65 percent chance of topping the record for the most wins in NBA history (72), set by the 1995-96 Chicago Bulls.

Meanwhile, the Los Angeles Lakers were having an epically bad season, the last in the fabled career of Kobe Bryant. They were just 12-51 and looked as if they wouldn’t crack the .200 winning percentage for the 2015-16 NBA season.

Golden State had already beaten the Lakers three times this year by margins of 18, 21 and 34 points. L.A. moved to as high as +18.5-point dogs for this game before settling at +17.5. Surely, it had no chance of winning, especially at a price as high as 22 to 1 on the moneyline. Right?

Well, that’s why they play the games.

If that was the end of the statistical madness from Sunday, it would’ve been enough for days of storylines. But that’s only the start.

The spread of +17.5 is the biggest in a game for a home team in more than two decades and the biggest thus far in the 2015-16 campaign regardless of home or away. Those aforementioned Bulls who won 72 games topped out at -16 on the road against Dallas a decade ago.

The spread of +17.5 is the biggest in a game for a home team in more than two decades…

The Lakers win also represented the biggest upset in NBA history from a winning percentage standpoint. According to the Elias Sports Bureau, the largest difference in winning percentage for an upset in NBA history was .701 back in 1999. The difference between the 12-51 Lakers (.191) and the 55-5 Warriors (.917) was .726, crushing the previous record.

How the LA Lakers Triumphed

With three minutes left in the third quarter, the Warriors were behind by 11 points and were still favored in live betting at BookMaker.eu to win the game at -170. Even when the Lakers were up 16 with 9:30 left in the game, they were just -300 on the NBA betting lines.

Of course, what must still be remembered from this is that this is still the NBA, and odd things happen all the time. The Warriors are still the odds-on favorites to win the NBA title, and the Lakers are still hoping to see their ping-pong ball picked out of the machine first in order to win the Ben Simmons sweepstakes known as the NBA Draft Lottery.

Golden State opened up this season with a fast, 15-0 start. At that point, the Westgate Las Vegas set a price of 5 to 1 on it to break the record of the ’95-’96 Bulls for the most season wins in NBA history. At the All-Star break, the Dubs moved to -160 to win 73 or more games. That mark improved to -230 heading into this weekend.

The Warriors still have a tremendous chance to only lose three games the rest of the way. Their next six games are all at home, where they’re 26-0 on the season, and they only have three road games left against teams with winning records.

What are some other major upsets in the history of American sports? Read about the Top 10 Underdog Payouts in US Sports Betting History