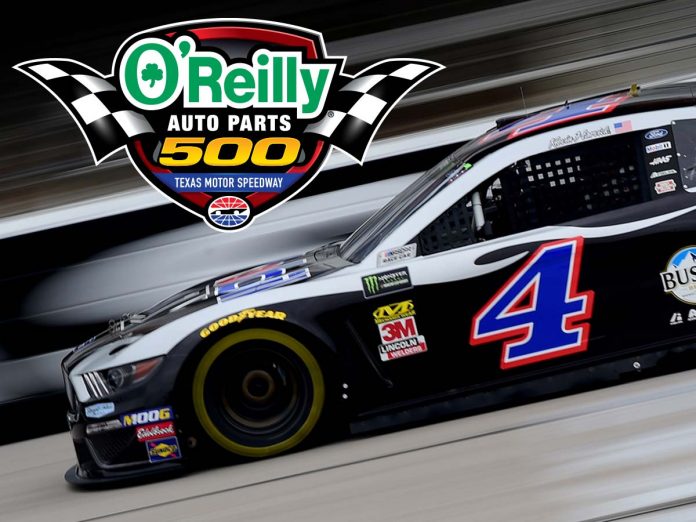 The mid-week stop in Bristol for the All-Star race festivities was all fun and games; now it’s back to work for the NASCAR Cup Series at Texas Motor Speedway for the O’Reilly Auto Parts 500. Kevin Harvick has won three of the last five races in Fort Worth, but he’s never taken the checkered flag at this event. Thanks to the success he’s enjoyed on this track, Harvick opened as the betting favorite at online sportsbooks.

We see the same names at the top of the odds board with Harvick followed by Denny Hamlin and Kyle Busch. Those three drivers all have three wins at Texas trailing only Jimmie Johnson, who leads the way with a record seven. Four other drivers – Matt Kenseth, Ryan Newman, Kurt Busch and Joey Logano – have also tasted victory at the Texas track.

Once you get into the season, and we’re well past the halfway point, rookies are no longer rookies. Cole Custer entered the playoff picture last week becoming the first rookie in four years to win a race on NASCAR’s premier circuit taking the Quaker State 400 by less than three seconds over Martin Truex Jr. In what could be a sign of things to come, Custer’s previous best finish was fifth the week before at Indianapolis Motor Speedway. Apparently oddsmakers aren’t sold since Custer opened at +13000 to become the first driver this season to go back-to-back.

The 2020 O’Reilly Auto Parts 500 takes place on Sunday, July 19, from Texas Motor Speedway in Fort Worth, TX. The race will be televised on NBCSN with the green flag dropping at 3 p.m. ET. Visit BookMaker.eu for a complete list of updated betting odds and wagering opportunities.

Harvick is positioned at the top of the odds board for good reason. As mentioned he’s won at Texas Motor Speedway three times in the last five races while amassing 11 consecutive top-10s with eight of those being top-5s. He’s been near the front on the starting grid in his victories, sitting on the pole last year while opening from the No. 3 spot the other two times. Harvick was picked to start from the fifth position on Sunday.

Getting the pole for the second time this season is Aric Almirola, who’s currently enjoying the best run of his career. He placed eighth last week, his worst finish in the last six races. Prior to that, he took third three times and fifth twice. We also saw his price drop this week to +2000.

Kyle Busch continues to confound backers with his season-long slump. He’s listed as the second favorite even though he’s yet to win a race and has more finishes outside the top-20 than he has inside the top-5 in his last 10 starts. Working on a track last week in Kentucky that’s been good to him in the past, he limped to 21st.

We expect him to win at some point since that’s what he does. He has the second-most victories among active drivers visiting the winner’s circle at least four times in each of the last five seasons. However, he hasn’t given any indication that the slump will end soon. I backed him last week but I can’t afford to do it again, especially at his current price.

If you want to keep it all in the family take a look at Kurt Busch. Like his brother, Kurt has yet to win this season, though taking the checkered flag isn’t new to him. KuBusch has 31 career Cup Series wins, including one at Texas. He’s also coming off one of his best races of the season when he took fifth on the 1.5-mile Kentucky track last week. Another 1.5-mile spin on a track that’s yielded him six straight top-10s makes Kurt a worthwhile bet.

There are some great drivers ready to attack the course; they just haven’t done it in the middle of the summer. Races are run at Texas in the spring and fall when the conditions are more bearable. There is going to be some serious heat this weekend and that puts additional strain on the car and crew. And this is new to everyone.

Jimmie Johnson has a record seven wins here with the most recent in 2017, which is the same year he recorded his last Cup Series win. It’s been 111 races now that JJ has failed to cross the finish line first. He might be the sentimental favorite since he plans on hanging it up after this season. But like KyBusch it’s hard to have confidence in him.

As with most races since the season restarted there is no practice or qualifying. Starting spots are determined by random draw with Harvick close to the front. He’s been successful from there and he’s been the best this season making it hard to go with anyone else.