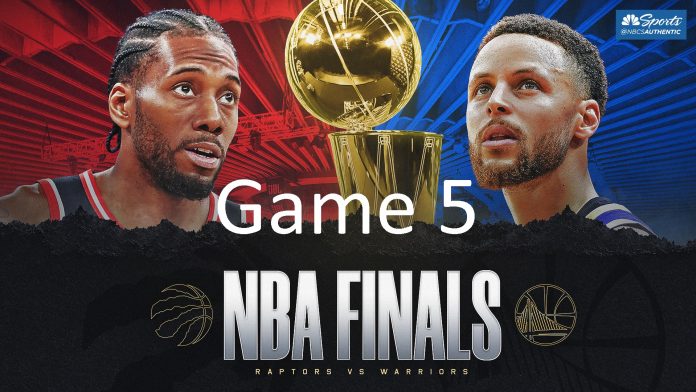 The Kevin Durant watch is on. The Golden State Warriors have their backs against the wall, trailing 3-1 to the Toronto Raptors in the NBA Finals. They are hoping to get back their superstar power forward for Game 5 but his availability is still up in the air.

The Raptors are at home and are slight favorites in this matchup and would love to end any drama and clinch the championship in this one. If the Warriors can get the series back to their home court for Game 6 they will feel good, and the intensity in this game should be extremely high.

Toronto has been the superior team in this series but the two-time defending champion Warriors certainly won’t be going down without a battle. This should be an exciting and nip-and-tuck matchup.

The Raptors are listed as 2-point favorites to win this game, and if they cover it will mean a championship for Toronto. The Warriors are the +105 underdog while the Raptors are the -125 favorite, but the spread has dropped in recent days. The scoring total is listed at 214 points, which has increased since the original odds were released.

The Raptors were underdogs in the two games in Oakland but won both outright, and the Warriors would like to return the favor in this one.

The Warriors were aiming to tie the series up at two games apiece in Game 4 and had the lead at halftime, but the Raptors dominated after intermission and cruised to the 105-92 win. Kawhi Leonard was fantastic, finishing with 36 points, 12 rebounds and four steals. Serge Ibaka played a pivotal role off the bench with 20 points in 22 minutes of play.

Klay Thompson returned to the court after missing Game 3 with a hamstring strain and didn’t show any ill effects, finishing with a team-best 28 points on 11-of-18 shooting from the floor, including 6-of-10 from three-point range. Steph Curry had 27 points but the Warriors didn’t have enough scoring help from the others on the team, which has been an issue in this series.

Durant practiced for at least a portion of the time on Sunday and has been listed as questionable for Game 5. He has been out since suffering a serious calf strain against the Rockets in the second round. If Durant can play, it is unknown of he will be under any minutes restrictions.

Durant is one of the most talented players in the NBA, and his availability will have an outsized effect on the spread, tilting it one way or the other whether he can play or not. All eyes will be on Durant’s status in the lead-up to this matchup.

The Raptors are at home but the Warriors have great resolve and are going to be able to pull off this slight upset. Durant will likely play in this one and he will be a huge boost for the team if that happens. The “under” is the pick as the points are going to be in demand in Game 5 of the NBA Finals.