It was a fight to the finish and now it’s a battle to the end. Several playoff seedings in both conferences and one postseason berth in the West weren’t decided until the final day of the regular season. Even the top teams in the league had their struggles during the course of the year and the run to the Finals is definitely up for grabs. There is parity throughout the league, but no more than with the middle seeds in each conference, and those series have played out as expected after two games.

The Indiana Pacers stole homecourt from the Cavs with a Game 1 win at the Q and head home after getting walloped by LeBron James in Game 2. But the Pacers will take that result as the four and five seeds duel in the East. And we have a similar situation between No. 4 and No. 5 in the West. The Jazz snapped a long losing streak in OKC to even that series with Donovan Mitchell vying for the Rookie of the Playoffs award. 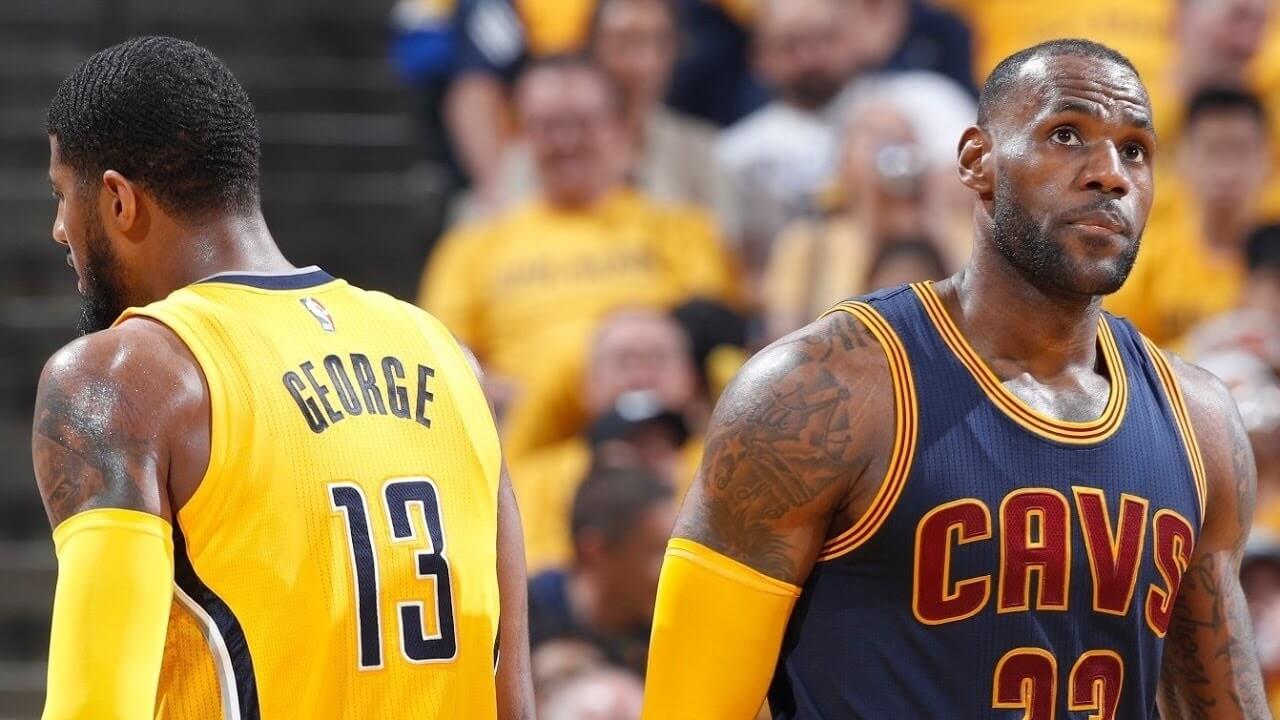 LeBron made sure the Cavs wouldn’t lose both games on their home floor by putting on a show in Game 2. Despite going for a triple-double in the opener, James was more passive than normal and the Cavs struggled because of it. After that 18-point loss, James said he needed to be more aggressing. Boy was he. He scored the Cavs’ first 16 points and totaled 46 in a vintage performance that resulted in his 20th career playoff game with at least 40 points.

The outcome of Game 2 might have been different if Victor Oladipo didn’t pick up two early fouls and head to the bench after only 62 seconds. The Cavs took advantage with Indy’s leading scoring on the bench and raced to a 33-18 lead after 12 minutes. The Pacers roared back and Oladipo had an open-look three to tie the game with 27 seconds remaining, but he was off the mark. The Pacers never led in the game, but they covered the spread and threw a scare into the Cavs.

The Cavs got a scare late in Game 2 when Kevin Love exited with an injury to the same hand that forced him to miss 20 games during the regular season. Love sat the final four minutes and said after the game that he expects to play in Game 3. Cleveland struggled with Love on the shelf earlier in the year and desperately need his secondary scoring to complement LeBron. If he does play, the injury could affect Love’s ability to catch and shoot, which he does so well.

The Pacers have to be feeling pretty good after getting a split on the road and nearly pulling out Game 2 despite LeBron dropping 46 on them. They rallied from an 18-point deficit and had a chance to tie the game late, but let the opportunity slip away. We expected the series to be tight with the teams separated by just two games in the regular season standing. But the Cavs have the best player on the planet, and when LeBron takes charge, good things happen for the Cavs. 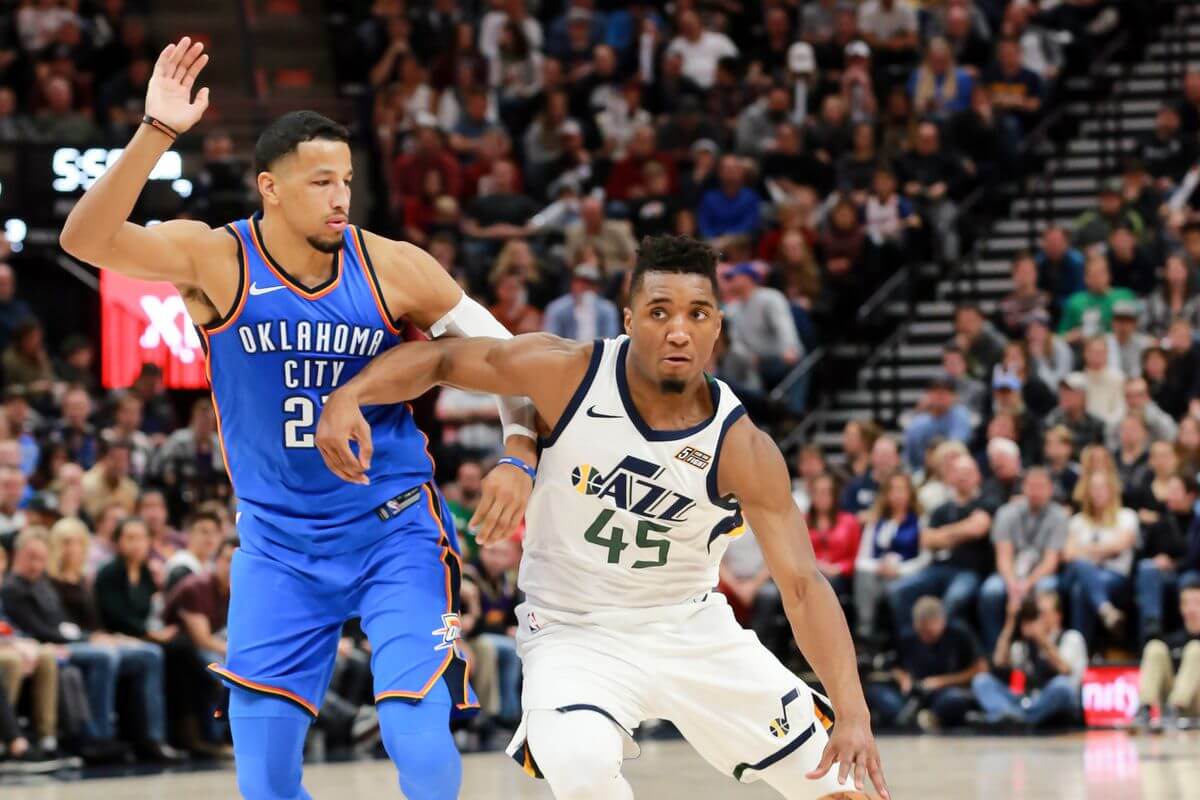 The Jazz hadn’t won in OKC since 2010, dropping 15 straight on the Thunder’s home floor until Wednesday night. Behind Mitchell, the Jazz not only ended their lengthy losing streak, they also tied the series at a game each and wrestled home court advantage away from the reigning MVP and his squad. The Jazz won Game 2 the same way they won 48 times during the regular season: with a stifling defense and Mitchell. Utah held OKC to 16 fourth quarter points, holding the Thunder to just 1 of 10 from three-point range. Mitchell scored 13 of his 28 in the final frame to nearly outscore OKC.

OKC’s big three of Russell Westbrook, Carmelo Anthony and Paul George were miniscule in the fourth quarter, allowing the Jazz to pull away and knot the series. The Thunder built a lead heading into the last frame, but they couldn’t make a shot and they couldn’t stop Mitchell. George was a big factor in Game 1 scoring 36 points on a team playoff record eight three-pointers, but a bruised hip affected his play on Wednesday. PG13 scored 18 points and was just 6 of 21 from the field.

The Thunder shot just 10 percent from three-point range in the decisive fourth quarter of Game 2 and Utah’s stingy defense was a big reason why. The Jazz did something few teams have been able to: hold George and Westbrook without a field goal in the last frame. George played all 12 minutes and was scoreless missing his six shots. Russ was 0 of 4 from the field and managed just two points on a pair of free throws while playing over 10 minutes.

Utah did what it had to do and now the Jazz have to hold serve in their barn. They got a lift from Mitchell, who was a game time decision on Wednesday with a sore foot. OKC is wishing he didn’t play. The rookie showed up OKC’s veterans, especially in the fourth quarter when he nearly outscored the entire Thunder team. And the Jazz also got outstanding efforts from Derrick Favors, Rudy Gobert and Ricky Rubio. It was a typical Utah victory and the Thunder can’t match that style of play, not when Westbrook and Melo are out searching for their stats.