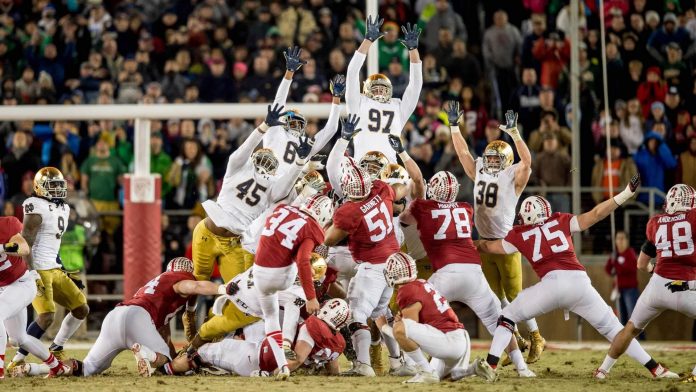 Week 4 saw a host of great finishes, upsets and backdoor covers. Week 5 is already just around the corner, and there promises to be just as much nail biting action for all you sports bettors. With so many games on the docket, it is a certainty that some heavy underdogs cover and sometimes even pull off the upsets and pay off handsomely on the moneyline.

Old Dominion pulled a shocking upset of Virginia Tech last week and a slew of underdogs would love to follow in its footsteps in Week 5. The trick for bettors is figuring out which underdogs are up to the challenge and when it’s a better idea to roll with the favorite to cover the spread.

Here are our top picks for week 5 in college betting:

One of the biggest games of the week features the Ohio State Buckeyes against the Penn State Nittany Lions. Penn State survived a scare from Appalachian State in its opener but has since gotten on track and enters ranked No. 9 in the country. Ohio State is No. 4 and looking like one of the best bets to make. The Buckeyes are only 3.5-point road favorites in this one as the oddsmakers believe this once could be a close battle. Ohio State, though, is just too talented and should cover the spread.

The Oklahoma Sooners had a clunker last time out but escaped with a close win. The oddsmakers aren’t holding it against them as the Sooners are a heavy 23.5-point favorite against the Baylor Bears. Oklahoma is at home and should put up a bunch of points in this one. Look for the Sooners to get back on track and to cover the hefty spread. If Oklahoma jumps out to a big lead, the “under” in the second half could be in play in live betting.

The Nebraska Cornhuskers have been a disaster in 2018, as they are 0-3 after a blowout loss last time out to Michigan. Nebraska gets a much easier game this week against the Purdue Boilermakers, but are still the underdogs. The Huskers looked overmatched last week against Michigan but should finally bounce back and pick up the home win. Take Nebraska on the moneyline.

The LSU Tigers have been one of the most impressive teams in the early portion of the season. They have big-time wins thus far over ranked foes Miami and Auburn. LSU was the underdog both times and came away with the win. The Tigers will be a 12-point favorite against Mississippi next time out, and while LSU will win to move to 5-0, Ole Miss is the choice to keep this close and cover the spread.

The Pac-12 South is looking pretty weak and the USC Trojans are hoping to jump to the top of the division. The Trojans are 3.5-point road favorites to knock off the Arizona Wildcats and USC is the pick to cover against a suspect Arizona team.

The games above are intriguing and there are some good wagers in there. However, there is a different one that stands out above the rest. The Notre Dame Fighting Irish made a quarterback change last week and came away with a blowout win over Wake Forest. Notre Dame will host the Stanford Cardinal in a top-10 clash in Week 5, with the winner remaining closely in the hunt for the Playoffs.

There is a lot on the line for both teams. Notre Dame is a 4.5-point favorite and is coming off a strong win. Stanford, meanwhile, pulled out a crazy comeback to beat Oregon in overtime and remain undefeated. The Cardinal was lucky last time out but will fall in this one. The Fighting Irish is also the pick to cover the spread in an easier win than the oddsmakers believed.

Check out the latest college football betting odds for week 5.