Home Sports Betting Basketball Betting March Madness 2016: 9 Reasons Why It Could Be the Best One... 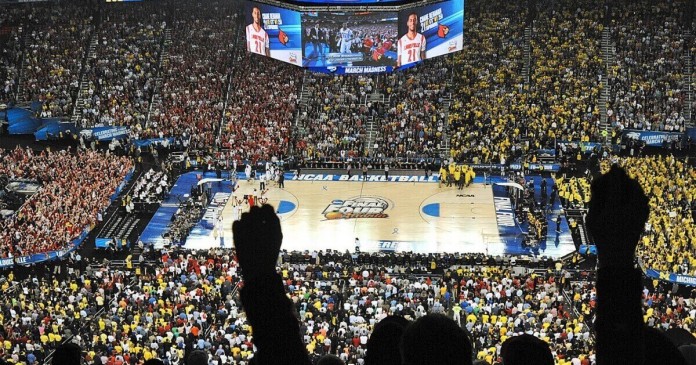 March Madness 2016 is almost upon us and although we still don’t know which teams will be chosen on Selection Sunday for the NCAA tournament, one thing we can be sure of is that it will be one of the best tournaments ever! Check out the top college basketball picks. Here are 9 reasons why our NCAA predictions are that this year’s tournament could just be the best, wildest, and the craziest of the madness yet:

What’s the goal of the 30-second shot clock and substantial new rules? They were meant to reduce physicality with increased offensive efficiency and encourage better pace of play along with better scoring.

So far, it seems to be working and as of December, scoring was up more than 5 points from the past year given the same time. It shot up to 73.90 points per team per game. Total possessions, field-goal percentage, and points per possession all slightly boosted up, which only stirs up more anticipation for March Madness.

2. A Chalk Full of Upsets

Iowa’s recent loss was the 23rd this season by a top-five team, marking history as the most before the month of February. Another loss on Monday night by No.2 Carolina as they were taken down by Louisville, making that a total of 5 different teams in the season who’ve lost as No.1.

This season is regarded as the most unpredictable, with upsets galore in only two weeks’ time in January. It’s reason to believe that the trend will continue in March, and if indeed it does, this could mean big trouble for chalk. Buckle up, because you’re in for a crazy ride.

Monmouth and its bench frat are known for their eccentric celebration antics. They are highly acclaimed and have gained national fame as the greatest bench squad. The Hawks sitting right on top of the MAAC are apprehensive to make it to the NCAA tournament. Whether or not they make this first appearance in 10 years, they’ve undeniably caught everyone’s eyes. Cameras will surely be ready to capture the next crazy thing that can happen after a monster dunk or big 3-pointer.

The current favorite for the Naismith Trophy is no other than senior leader of top-ranked Oklahoma Sooners, Buddy Hield. He ranks 2nd in the entire country with 25.8 points per game and 52.8 percent of shooting from field, 51.7 from the 3-point line, and 89.6 percent from free-throw stripe.

Hield has been in the spotlight and the excitement has hyped up with some of the team’s biggest games. In the three-overtime loss to Kansas in January, he managed to score 46 points, and 32 during the match up against LSU and Ben Simmons.

March is that point in time when stars become legends. Could Buddy Hield be the next, after his stunning game-winning 3-pointer in the 63-60 decision in No.3 Oklahoma over No. 24 Texas?

It may be the Providence star point guard’s time to shine in March. Kris Dunn is having the best season averaging at 17.2 points, 6.9 assists, 6.0 rebounds, and 3.1 steals per game. He may need improvements as a junior, but the Friars are just perfect with Dunn.

Despite their loss to DePaul, it’s still an impressive season for the Friars at 18-5, putting them in a prime position towards making their 3rd consecutive tournament. Though they have not reached a Sweet 16 since the year 1997 nor a Final Four since 1987 in the NCAA bracket, could Kris Dunn be the ticket to Providence fame in the 2016 March Madness?

Annual bracket-buster Shockers have won 14 of 15 and 11 in a row with an experienced squad headed by Ron Baker and Fred VanVleet. Take into account their past 3 years, from a trip to the Final Four in 2013 to their unlucky third-round matchup with Kentucky that handed them their first recorded loss of the 2014 season, and their wins against Indiana and Kansas that ultimately led to the Sweet 16 in the year 2015. The Shockers truly deserve their name for never failing to surprise the audience, so be prepared for another shock this March.

Wichita State and Texas have both lost some games early on, but has turned the tide around. The Longhorns have won 6 of 7 as Shaka Smart fires his system and starts a new era in Texas basketball. Defensively, opponents shot 39.7 percent against Texas and has given up 63.4 points per game during the past nine games.

The 9 other regulars average about 10 minutes per game and typically attain a score of no more than 10.5 per contest. Isaiah Shaquille Taylor leads the way with 15.4 points per game in offense, however, Cameron Ridley is out with a broken foot. This entails a true team effort for the Texas Longhorns, but shouldn’t be much of a problem since this team has the coach and the right balance that can get them through this March.

LSU Tigers’ freshman Ben Simmons ranks among the top freshman and best players in the country, averaging 19.5 points, 5.0 assists, and 12.5 rebounds per game.

Simmons has absorbed most of the spotlight as he brings the promise of a must-watch tournament game, but there are aplenty of young talent worth a close look this March.

The names Jaylen Brown and Ivan Rabb of California, Duke’s Blue Devils freshman Brandon Ingram who’s second for Duke at 17.0 California, and Kentucky’s Jamal Murray leading at 17.5 points per game are attention-grabbers too in basketball betting.

Kansas, Kentucky, North Carolina Blue Bloods and the likes are undoubtedly in contention for a national championship, but there may be new bloods including Oklahoma Sooners who’s been to the Final Fours in 2002, Iowa who’s currently No. 5 was in a Final Four in the ’80s. The 6th-ranked Xavier and 9th-ranked Texas A&M, and many other teams have the potential to create history in the March Madness.

The NCAA tournament is scheduled to begin on March 15th and the championship game will be held on April 4 at the NRG Stadium in Houston, Texas this 2016.

Keep up to date on the latest college basketball odds on BigOnSports.com