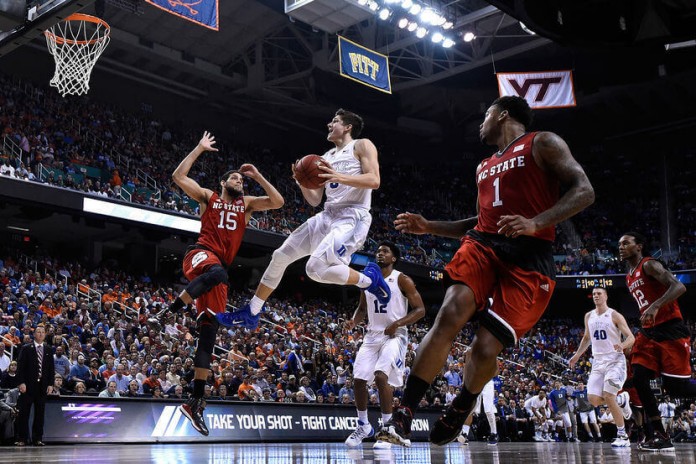 However, just because the Super Bowl is in the books doesn’t mean that massive amounts of money won’t exchange hands in the sports wagering world over the next two months. You’d better pick your NCAA bracket wisely this year, as an ABC News report by Peter Dizikes suggests there was at least $60 million gambled on the NCAA Tournament in 2014, making it easily the second biggest betting event on the sports calendar.

If the common belief that legal betting in Las Vegas accounts for less than five percent of the total amount wagered on sports, the total handle for March Madness 2016 could easily top the $1 billion mark.

Where We Go for NCAA Betting

Most NCAA Tournament bets are of the office pool variety. You and a bunch of your buddies or co-workers get together and fill out brackets with your top college basketball picks, and generally speaking, the one with the best NCAA bracket at the end of the three weeks walks away with a prize.

And while most of these bracket pools are of the casual nature and often require small buy-ins like $5 or $10, the rewards for close NCAA predictions can be tremendous if you work in an office with 200 people in it. And even though most people don’t realize it, this is technically illegal gambling (pretty ridiculous, right?).

You’ll also find thousands upon thousands of sports media companies that offer NCAA Tournament bracket challenges. Pick a perfect bracket, and you can win $1 million or even more. This form of basketball betting actually isn’t illegal because they do not ask for a buy-in fee.

What Are Your Odds of a Perfect NCAA Bracket?

Since the NCAA Tournament expanded to 64 teams, no one has been known to produce a bracket with 63 winners on it.

Just getting through the first round of games with an unblemished bracket is difficult. With the hundreds of millions of entries into various bracket challenges, at best, there will only be a few hundred people who still have perfect brackets going into the second week of the tournament.

The reason for that is simple. Upsets occur all the time, and no matter how good of a handicapper you are, you aren’t going to nail down every time Florida Gulf Coast or Hampton shock the nation as 15-seeds.

The Trouble with College Basketball Betting

What has made the madness even greater in recent years is the one-and-done athlete. High school kids have to commit to going to college for one year before going to the NBA, and oftentimes, we see these kids from small towns and small colleges who have senior-laden teams pulling off upsets of the giants in the dance due to experience.

You can’t simulate the NCAA Tournament, and many of these 19-year old kids who only play 35 college games in their careers aren’t ready for the moment of six consecutive do-or-die games, especially running up against groups of guys who have played together at the college level for four years.

Even just getting the four Final Four teams is virtually impossible. Last year, No. 7 Michigan State cracked the Final Four before losing to Duke in the national semifinal. The prior year, No. 7 Connecticut, a 250 to 1 underdog to win the dance at the outset of the tourney, went all the way on the back of Shabazz Napier. In 2011, the Final Four teams featured teams seeded 3, 4, 8 and 11. Just once in the history of the dance have all four No. 1 seeds advanced to the Final Four, that coming in 2008 when Kansas beat Memphis for the National Championship.

But that won’t stop the world from aiming at perfection. NCAA Tournament betting is a haven for amateurs and experienced sports bettors alike, and that’s something that will never change.