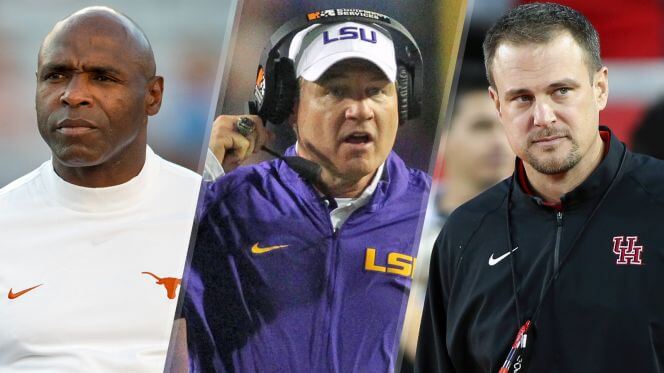 The Texas Longhorns and Notre Dame Fighting Irish have spent big bucks over the years to get to the point of having Charlie Strong and Brian Kelly respectively on their sidelines. And now, they might be ready to open up their wallets once again to get other people in those roles.

BookMaker.eu opened up college football odds to coach Texas and odds to coach Notre Dame in 2017, and in both cases, the current coaches aren’t the favorites to be those men.

It might be a little shocking to think that the biggest underdog here is actually the man who is coaching the team right now. Charlie Strong, by all accounts, hasn’t really had a great tenure in Austin.

The Longhorns are just 16-18 thus far in his three years on the job, and they really haven’t made any tangible strides in the right direction after a poor several seasons at the end under Mack Brown.

When he turned down other jobs last year after his great season with Houston, that really got most of the talking heads wondering if he was only going to accept a job in the Lone Star State.

Texas would be the top job available for him if that’s what he really feels, thus it makes sense for him to be the odds-on favorite at -180.

Les Miles doesn’t necessarily make a lot of sense for the Texas job, but he’s going to be the biggest name out there on the market and will surely get an interview in Austin if Strong does get fired. That doesn’t necessarily make his football betting price of +375 worthwhile, but it would be foolish to at least not to think about him in burnt orange.

The case of Notre Dame is far more interesting. The Fighting Irish have certainly had a worse season than Texas has, and if they were to fire Kelly, they would be doing so under the sole premise that this season is very likely to end without a trip to a bowl game.

The powers that be at Notre Dame though, would probably be wise to go back and look at what they’ve had in terms of coaches over the course of the last several years and think twice about firing Kelly.

Let’s also not forget that it was only a few years ago that the Fighting Irish were undefeated in the regular season and playing for the National Championship against Alabama, albeit a game in which they were blown the heck out.

Who is out there that would be an upgrade on Kelly? Miles? The fit is certainly better here than it would be at Texas, as the Irish already have a strong defensive base in place and have a team much more likely to fit with Miles’ conservative offensive style.

Other Options for the Fighting Irish

If you’re going to bank on Kelly getting fired here, the better bet in the NCAA football odds is probably on the field at -145. David Shaw makes a little bit of sense here taking the jump from one fantastic academic university in Stanford to another one in Notre Dame, but P.J.

Fleck would be making too big of a leap here, while Urban Meyer really has no reason to leave Ohio State.

And that’s what brings us back to Notre Dame keeping Kelly. Who else is out there that is really an upgrade on a coach who has played for a National Championship? Nick Saban? Jimbo Fisher? Meyer?

Why would these men leave their current successful jobs in which they have all of the job security in the world for this gig in South Bend?

For more college football betting news and odds, check out Here’s How to Find College Football and NFL Sleeper Picks