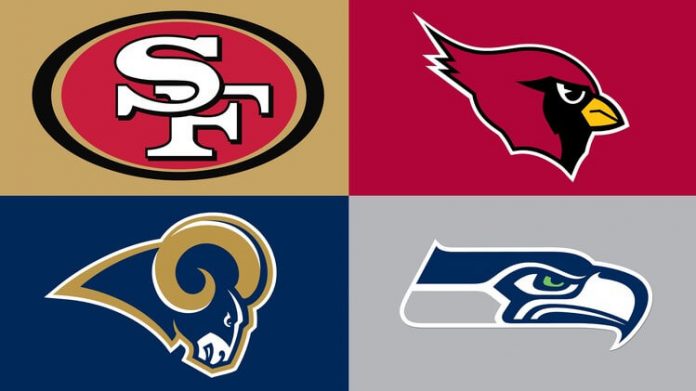 The Seattle Seahawks and Arizona Cardinals were the teams to beat in recent years but now have the longest odds to win the division. The Los Angeles Rams are the new power in the division after surprisingly winning it in 2017 and then loading up with talent in the offseason.

The arrival of coach Sean McVay last year kicked off a renaissance and now the Rams are expecting to be Super Bowl contenders. Quarterback Jared Goff, running back Todd Gurley and defensive tackle Aaron Donald highlight the list of returners, while the team also added Ndamukong Suh, Marcus Peters and Aqib Talib to the defense. With all of this talent it is easy to see why the Rams are the prohibitive favorites to claim the division for a second straight year.

The San Francisco 49ers are the toughest team to judge in the division. They struggled for most of last year but played extremely well with Jimmy Garoppolo under center down the stretch after he arrived via trade. Cornerback Richard Sherman and others joined the team in free agency and now San Francisco is aiming to take a big step forward into playoff contention.

The Seattle Seahawks are no longer the team to beat in the West after a fantastic run. Sherman, Kam Chancellor and Michael Bennett are gone from a terrific defense, while safety Earl Thomas is unhappy with his contract and holding out. Seattle still has Russell Wilson and some good players on defense, but it’s hard to imagine the Seahawks being as good as they have been the past few years.

The Arizona Cardinals have extremely long odds to win the division. They made the NFC Championship game in 2015 but haven’t finished above .500 in either of the past two years and now have a new coach in Steve Wilks and a new quarterback in Sam Bradford. The Cardinals’ defense is underrated but the offense will need to play better than expected for the team to be competitive, and they have a tough schedule.

The Rams are definitely the best team but these odds are pretty tough. Los Angeles may get hit with an injury to a key player which would torpedo the season, something that happened to multiple teams a year ago. If everything goes as expected, the Rams should win the NFC West, but at -193 it’s not a great payoff.

The 49ers might look attractive but they are getting too much credit for the end of last season. Garoppolo looks good but it is still a small sample size and +300 is not enough of a longshot.

The Seahawks and Cardinals are the more attractive bets. While it’s easy to understand while the oddsmakers have made them longshots, each team has more talented players than given credit for. The Rams are the team to beat for a reason but if things don’t go right for Los Angeles, it would open up the door for one of these underdogs to win the division.

The Rams are the pick but it’s best to stay away from them at these odds.