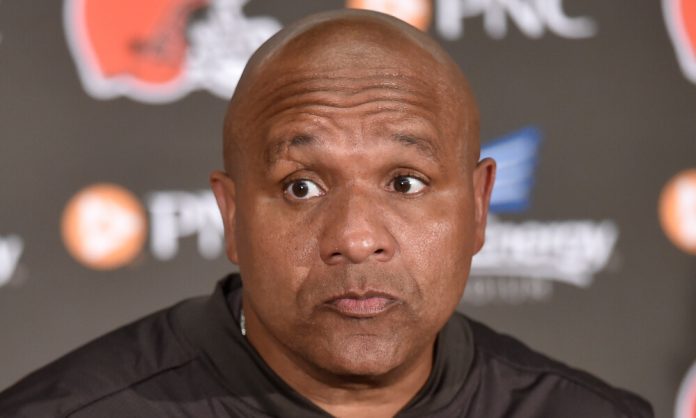 Teams usually wait until the season is over to make coaching changes, that’s why the first Monday after the regular year ends is termed “Black Monday.” That’s not always the case, however. Sometimes a club is so bad or fails to reach expectations that a move is made during the season. There were seven coaching changes following the 2017 season with only one – Giants Ben McAdoo – relieved of his duties prior to the end of the season.

Coaches are hired to be fired and five other coaches were dismissed after the conclusion of the 2017 regular season and one retired, leaving the door open for seven new men to test their luck. We can eliminate those seven from our list, and the odds at BookMaker.eu for the first coach fired during the regular season doesn’t include any of them.

The heat is on Cleveland’s Hue Jackson, who is the favorite at +317 to get the axe first. He has the highest losing percentage of any coach that’s been around for two seasons and it was amazing he was retained after going winless last year. The Browns have just one victory in Jackson’s tenure and with an upgraded roster, the pressure is on him to win and win early.

It’s hard not to put Jackson at the top of the list and the odds are favorable. In his two years the Browns have won just one game and last season they became the second club ever to go winless during a 16-game regular season. Ownership made changes elsewhere within the organization and you can bet Jackson has a short leash entering 2018. Much more than just a few victories are expected for the Browns this season and if they stumble out of the gate, Jackson’s shelf life will have expired. He isn’t a bad coach, enjoying success as an assistant and coordinator. However, some guys are meant to be in the background and Jackson is one of them.

The Tampa Bay coach was given the job to mentor Jameis Winston, and that hasn’t worked out. With the 2015 No. 1 overall pick stagnant in his development, the Bucs haven’t progressed after going 9-7 and narrowly missing the postseason in 2016. The team stumbled to a 5-11 record last season and failed to win a number of close games. With Winston suspended for the first three games in 2018 with matchups against New Orleans, Philadelphia and Pittsburgh, the seat will get warm quickly under Koetter’s derriere.

Cowboys’ owner Jerry Jones doesn’t go for the quick fix and make changes on a whim. He also doesn’t care for mediocrity. And that’s what the Boys have been under Jason Garrett, who enters his eighth full season with just two playoff appearances and one victory. When those two playoff years are eliminated, Garrett has a record of 42-46. He’s failed to build a consistent winner and even has former players calling out his competence as a head coach. The Boys need to be better because that’s what their owner expects, giving Garrett has plenty of value at +1829.

John Elway went out on a limb with the hiring of Joseph, and after a 5-win campaign the branch is about to snap off. Three years removed from a Super Bowl victory, the Broncos were atrocious in Joseph’s maiden season. Elway isn’t shy about pulling the trigger on any move and if he feels the club isn’t responding, you can bet Joseph will be the scapegoat.

Check out the latest NFL coach to be fired odds – click here.