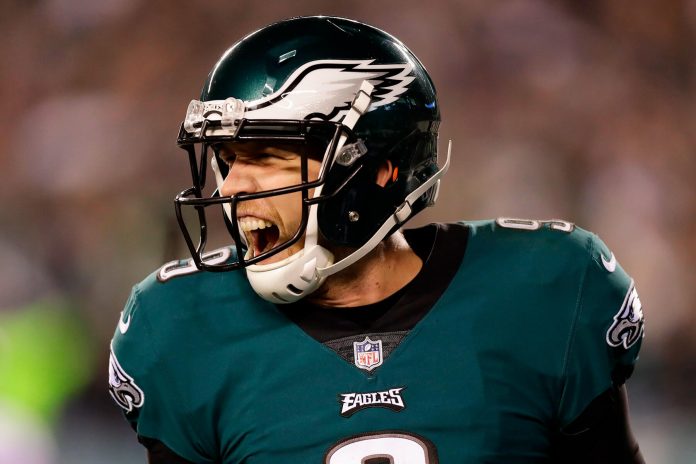 Several up-and-comers made their move in the National Football Conference last season, and their offseason transactions have given them staying power. Five teams that didn’t reach the postseason in 2016 qualified last season, one of those being the eventual Super Bowl champion Philadelphia Eagles. Thus, Philly is the favorite to repeat as conference champions, but like we saw, anything can happen.

It’s easy to go with the defending champs after posting a league-best win total and claiming their first Super Bowl title – with a backup quarterback no less. But it’s much tougher to win with a target on your back. And the NFC is stacked in 2018. The Rams reached the postseason for the first time in 13 years and strengthened their defense during the offseason to complement the NFL’s highest scoring offense. Minnesota landed Kirk Cousins in an effort to lift them to Super Bowl glory. And Green Bay will have two-time MVP Aaron Rodgers back behind center after they stumbled without him in 2017.

With all the contributing pieces returning, the Eagles are in a good spot for another run at a Super Bowl and they hit the board as the favorite at +365. Carson Wentz is back from his knee surgery that cost him the final few games of the regular season and the postseason run. Wentz led the offense with 33 touchdown passes before getting hurt in a Week 13 matchup with the Rams. And it looked like he took any championship hopes with him. Nick Foles got all the glory leading the Eagles to a Super Bowl win over the Pats, earning MVP honors along the way. And he’s back to help form the best quarterback duo in the league.

Philly snuck up on the pack last season going from worst in the NFC East in 2016 to Super Bowl champions. With that comes the added pressure of trying to repeat while playing a first place schedule. Only one NFC team has repeated since 1998 and the field is as strong as ever. A good sign for the Eagles is that they don’t rely on one player. We saw them overcome the loss of Wentz, Jason Peters and Jordan Hicks to win it all last year.

There is value with Atlanta at +1000 to win the NFC. The Falcons are the only NFC team to reach the postseason in each of the last two seasons and they are just two years removed from a Super Bowl trip. They led the league in scoring in 2016 only to have a significant drop last season under first year OC Steve Sarkisian. The addition of Calvin Ridley to go along with Julio Jones should put some pop back in the passing game and Sarkisian should feel more comfortable after taking over for Kyle Shanahan. This is his offense now. The scary part about the Falcons is their defense. Dan Quinn built a beast during his days in Seattle and he has Atlanta looking like a top unit. And that’s necessary in the NFC South.

Fellow South member New Orleans also looks scary good heading into 2018. After three straight seven-win seasons, the Saints busted loose last year to win 11 games and the division. They have a solid group of young players acquired through the draft and Drew Brees is showing no signs of slowing down at his advanced age. They had the top two rookies from each side of the ball last season and the defense improved significantly. Brees needs to stay healthy since there is no Plan B in place yet, and the Saints could be a bargain at +850.

Minnesota landed the biggest free agent prize in Kirk Cousins and they could be the scariest team in the conference. The offense wasn’t poor under Case Keenum last season, but the addition of a high-caliber signal caller could be what gets them to their first Super Bowl since the 1976 season. The Vikings had the NFL’s stingiest defense last season and they’ve been strong under Mike Zimmer. They should again be good at stopping opponents. Cousins has a better supporting cast than he had at Washington with Adam Thielen and Stefon Diggs among the best pass-catchings duos in the league.

It was a season to remember for the Rams under first-year head coach Sean McVay. They had a seven-game improvement from 2016, won their first division title since 2003 and ended a 12-year playoff drought. Sustaining success is much tougher but the Rams have a core group that could rule the NFC West for a few years. Jared Goff and Todd Gurley had breakout years as the Rams went from the lowest scoring team in 2016 to the highest scoring club last season. Adding Ndamukong Suh, Marcus Peters and Aqib Talib will also help a defense that ranked 19th in yards allowed per game.