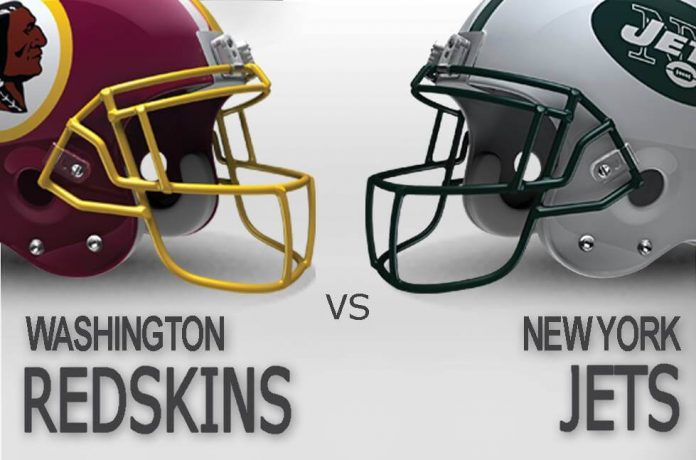 For decades after Joe Namath left, the New York Jets have been searching for a franchise quarterback. There have been a few decent ones in the years since, some not so good and a few passed their prime looking to hang on for another season. Namath played 12 seasons for Gang Green, several of those marred by injuries and in an era where the forward pass wasn’t the norm and a 14-game schedule was. Still, Broadway Joe is the Jets all-time passing leader over three decades after his final game.

In an attempt to rectify the problem, the Jets landed Sam Darnold with the No. 3 pick in the recent draft, and the team has a problem other NFL teams wish they had. Darnold is one of three QBs battling for the starting job along with veterans Josh McCown and Teddy Bridgewater. Darnold is the key and will be given every opportunity to become the starter. He had a nice debut in New York’s opening win and will take plenty of snaps in his first road game when the Jets visit the Washington Redskins in Week 2 preseason action on Thursday. The game will air live on ESPN.

It’s too early to call the Jets contenders, but they looked good in their preseason opener, shutting out the Falcons 17-0. The quarterback play was strong with all three players seeing action and getting in on the excitement. McCown started and played one series before giving way to Bridgewater. The former Viking is looking to resurrect his career after a destructive knee injury a few years ago. Bridgewater hit on 7 of 8 throws for 85 yards and a score.

Darnold played 65 percent of the snaps and looked poised in the pocket. He completed 13 of 18 for 96 yards and a touchdown and was getting first team reps in practice this week. Coach Todd Bowles said he would give his rookie at least one preseason start and all indications are that one is coming this week against the Redskins.

The start to the preseason looks like a continuation of 2017 for the Redskins. A team besieged by injuries last year, the Skins already received bad news on the injury front. Second-round pick Derrius Guice was lost for the year with an ACL injury sustained in the preseason opener, and the team also lost two other players for the year. Guice was brought in to help a run game that produced less than 91 yards per game in 2017, and now it’s back to the drawing board for Jay Gruden and his staff.

There are capable bodies to tote the rock, but two players in the competition are coming off injuries sustained last season. And while the running game gets sorted out, the Skins will get their first look at Alex Smith in a game-setting. The new QB didn’t play last week, instead letting backup Colt McCoy take a majority of the snaps. Smith has excelled in camp, drawing praise from his receiving corps.

With Guice on the shelf, the competition at running back heated up. Samaje Perine led the team last season with 603 rushing yards and Gruden likes the fact that the former OU standout has trimmed down, making him quicker and shiftier. Perine also proved durable last season by playing in all 16 games.

Robert Kelley will get a crack at the job after having his 2017 season cut short by injuries. Kelley had over 700 yards rushing during his 2016 rookie season, but he had a reduced role last season and eventually went on IR after seven games. Chris Thompson, Byron Marshall, Kapri Bibbs and Martez Carter will all get looks, but staying healthy is the most important thing.

With injuries stacking up already, we might just see Gruden wave the white flag. At least expect him to be more cautious with playing time for his starters. We will see Smith make his Skins debut and all reports from camp are that he’s nailing it. Given the injury situation, I don’t anticipate Smith playing more than a few series. That’s OK because the Skins have a quality backup in McCoy, who helped stake his team to a lead in New England last week.

We will see plenty of Darnold and Bridgewater for the Jets and how the rookie plays will determine the outcome of this one. Things aren’t always going to go as well as they did in the opener and playing on the road offers a different situation, one that Darnold isn’t quite used to at the NFL level.

NFL ATS Pick: Redskins -1.5 and the Under