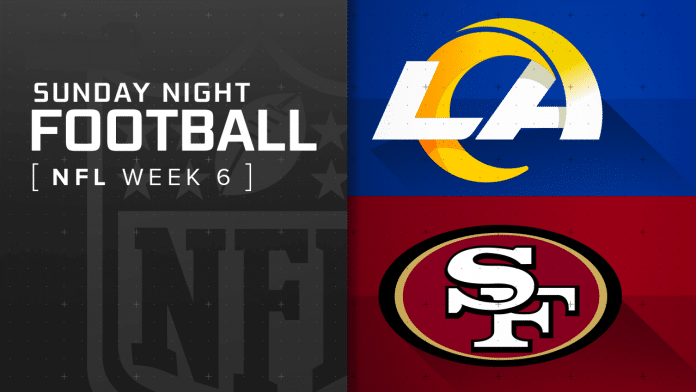 Last season was the perfect storm for the San Francisco 49ers. Years of losing and stockpiling draft picks, along with the return from injury of Jimmy Garoppolo and a favorable schedule allowed them to post 13 wins and reach the Super Bowl. They’re finding out how the other half lives in 2020. Injuries have played a big role, but the Niners find themselves in last place in the NFC West with a contest against division rival Los Angeles Rams on Sunday night kicking off a stretch of seven straight games against teams entering Week 6 with a combined record of 22-6.

The matchup between the Los Angeles Rams and San Francisco 49ers will take place Sunday, October 18, 2020, at 8:20 p.m. ET at Levi’s Stadium in Santa Clara, Calif. The game will be broadcast nationally on NBC.

Like every other team in the NFL the Niners beat up on the New York teams. Outside of those games they are 0-3 SU and ATS, including last week’s 43-17 shellacking at home by the Dolphins, which followed a loss to the previously winless Philadelphia Eagles. The Niners closed as an 8.5-point favorite in both those games. Recent results forced a major shift in the line. SF hit the board as a field goal favorite prior to last week’s games and another awful display by the defending NFC champs pushed a lot of money the other direction.

The line jumped the fence in favor of the visitors. The Rams have the best record in the NFC East completing the season sweep of that division with a convincing 30-10 win over the team formerly known as the Redskins. LA covered the 7-point spread snapping a two-game ATS slide while improving to 3-2 ATS for the year. Two years ago when the Rams reached the Super Bowl they swept the season series. Last year it was the Niners winning both games on their way to the Super Bowl. The Rams are 3-1 ATS in the last four with two straight covers at Levi’s Stadium.

The Rams play their first division game of the season building a lot of confidence by winning four games against NFC East foes. Their best game of the season, though, might have been the lone loss. Trailing Buffalo 28-3 in the third quarter the Rams staged a remarkable comeback behind Jared Goff, scoring four consecutive touchdowns to take a 32-28 lead. If not for a questionable defensive pass interference penalty on the Bills eventual game-winning drive, we could be looking at the undefeated Rams.

Purging high-priced players in the offseason led many to believe the Rams would be in rebuild mode. One player they did keep is Aaron Donald, and he’s proving why he’s the best defensive player in the game. The Rams have held four opponents to fewer than 20 points and boast a top-5 defense in terms of points allowed, passing yards and total yards. They have at least three sacks in four games and tallied eight last week to grab a share of the NFL lead with 20. Donald had three of the sacks to increase his league leading total to 7.5.

Having a dilemma at the quarterback spot isn’t ideal when facing a team that likes to get after him. The Niners totaled 37 points in the last two games with play from the position a big reason why. With Garoppolo nursing an injured ankle, Nick Mullens got the start against Philly. He tossed a pair of interceptions, including a crucial pick-six in the fourth quarter that proved to be the difference. We can chalk that up to being just a bad day because things will return to normal when Jimmy G. gets back. Not so fast, cowboy. Garoppolo was even worse against the Dolphins compiling a 15.7 passer rating with two picks and three sacks. C.J. Beathard relieved both games and fared well, but he already had a crack at the starting gig and failed.

The Niners are dealing with their share of injuries and it’s clear they don’t have the depth. With their top three cornerbacks shelved for last week’s game, Ryan Fitzpatrick had a field day hitting open receivers running all over the Levi’s Stadium turf. Fitz completed 22 of 28 for 350 yards and three touchdowns. Richard Sherman had a setback in his recovery and won’t be available this week, and the Niners are without pass rushers Nick Bosa and Soloman Thomas for the rest of the season.

I like the Rams balanced offensive attack that has them fourth in the NFL in total yards. I’m hesitant to jump on the bandwagon just yet, though. Beating up the NFC East isn’t a major accomplishment since teams are a combined 4-15-1 through Week 5. The Rams do have stability on offense and until the Niners figure out the QB spot I have a hard time backing them.