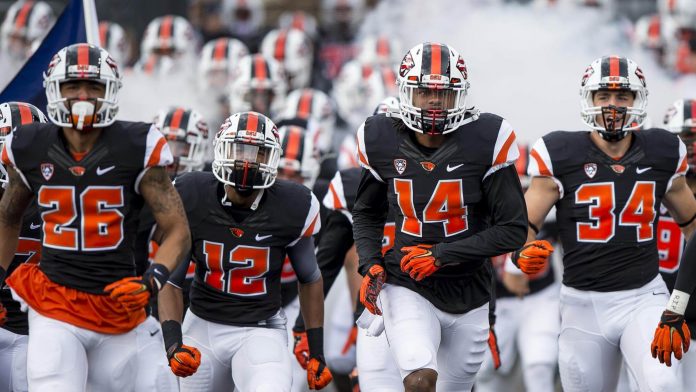 The Ohio State Buckeyes journey to the national championship will begin this week when they face off against the Oregon State Beavers, but it will be without coach Urban Meyer. He has been suspended for the first three games of the season after the mishandling of domestic violence allegations.

Meyer is one of the best coaches in college football and his absence should be felt in this one, but Ohio State will still be the sizable favorite at home. The Buckeyes are breaking in a new quarterback and lost some talent to the NFL but boasts plenty of talent. Oregon State will be hard-pressed to win this game but hopes to at least remain competitive.

The Oregon State Beavers and Ohio State Buckeyes will face off on Saturday, September 1st, 2018 at 12 p.m. ET at Ohio Stadium in Columbus, Ohio. The game will be nationally televised on ABC.

Ohio State is a massive 37.5-point favorite in this matchup, a spread that’s hard to find when two Power Five teams face off. But the Buckeyes are national title contenders and the Beavers are coming off a season in which they captured just one game. Ohio State is giving 75 percent of the action despite the massive spread.

The scoring total is listed at 64 points. The “over” is getting 64 percent of the action.

The Buckeyes have named Dwayne Haskins the starting quarterback following an offseason competition with Tate Martell. Haskins saw limited work a season ago, completing 40-of-57 passes for 565 yards with four touchdowns and an interception.

J.T. Barrett moved on to the NFL after last season, opening up the battle to replace him. Martell is an athletic player and should see time this season, but Haskins will get the first chance under center. He hopes to play well from the beginning and it’s an easy landing. Oregon State allowed 43.0 points per game in 2017, which was third-worst in the country.

The Beavers are going to be inferior at nearly every position when these teams match up, which should allow Haskins to dominate. The true tests will come later in the season as Ohio State proves whether or not it is a true national championship contender, and Haskins will look to get comfortable in the spotlight in this one.

Oregon State has failed to cover the spread in September 6 times in a row. The Beavers have gotten off to slow starts of late and have to be crisper in order to change that narrative in this one.

Oregon State has only covered in one of its past seven season openers so the Beavers will need to play better out of the gate in order to buck these recent trends. It can be a poor coaching strategy if a team continues to fall short on covering spread consistently early in the season, or it means the oddsmakers have misperceived the team’s talent.

Ohio State is one of the best programs in the country and should be able to run roughshod over the Beavers. The Buckeyes have to replenish this season but sign great recruiting classes each year and have talent waiting in the wings.

Oregon State has a new coach but there are a bunch of talent issues in Corvallis. Even without Meyer the Buckeyes are not going to miss a beat. This is a big spread but Ohio State is the pick to cover with a blowout victory in NCAA football wagering.