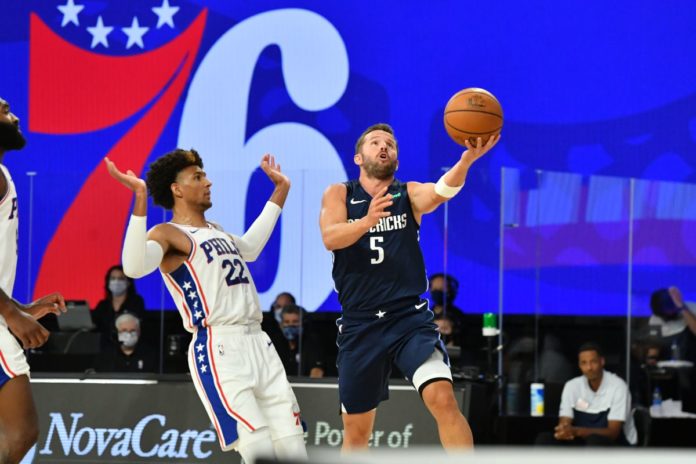 Talk about some inconsistent play. The Dallas Mavericks are currently in a playoff spot resting seventh in the Western Conference standings, but they need to tighten things up as we head down the home stretch of the season. The Mavs have split their last four games beating two of the NBA’s best in Milwaukee and Utah, which should be cause for a joyous celebration. It isn’t because the losses were to Houston and San Antonio, sub .500 teams that are out of the playoff picture entering the week. The Mavs go for another win over a top team in the league standings with a Monday tilt against East co-leading Philadelphia 76ers in the opening game of an ESPN doubleheader.

Tip off is Monday, April 12 at 7:30 p.m. ET from American Airlines Center. The game will air live on ESPN.

The Sixers endured a stretch without MVP candidate Joel Embiid going 7-3 SU and 6-3-1 ATS. You’d expect them to take off once he returned. But as we’ve learned this NBA season there is no sure thing and just when you think you have things figured out you don’t. The Sixers have been at or near the top of the Eastern Conference standings all season so I don’t expect them to go anywhere.

They also held up well without their star center. Embiid returned to drop 24 points with eight rebounds in a win over Minnesota. He sat the next day, a loss to Memphis, before playing in the last three games with Philly going 2-1 SU and ATS. Embiid was off his game in the setback during that span going just 5 of 16 from the field with 14 points against New Orleans. A 117-93 payout win over Oklahoma City on Saturday kept the Sixers tied with Brooklyn for the East lead with a record of 36-17 SU and 29-22-2 ATS.

Maybe the Mavs were feeling overconfident when they tangled with Houston last week. Riding a five-game winning streak with the last coming over the NBA-best Utah Jazz, the Mavs were embarrassed by the Rockets 102-93. If the Mavs miss the playoffs they can look at a pair of losses against their in-state rival as a reason why. What’s more surprising is that they didn’t have any excuses other than not playing well, which is unacceptable against a club fighting to stay out of the Western Conference basement.

Dallas should be better offensively now that Kristaps Porzingis has returned. Porzingis and Luka Doncic combined for 54 points in a win over Milwaukee, though the Bucks played without MVP Giannis Antetokounmpo. The Mavs are in the middle of a stretch where they play eight of nine games at home, but they haven’t really had a homecourt advantage. They are just 13-11 SU and 10-14 ATS on their home floor this season.

We caught a glimpse of how good the Sixers are without Embiid. Now that he’s back the race for the No. 1 overall seed in the East should be a battle to the end. There’s no question they are a better team with Embiid playing and the big man let everybody know that after he tallied 27 points and nine rebounds in three quarters against OKC.

“When I’m on the floor I feel like I’ve been the best all season, just doing my thing, just dominating with the help of my teammates and the coaches putting me in the right positions to succeed,” he said. The Sixers ended a three-game losing streak in the series with a 111-97 payout win in February with Embiid getting 23 points and nine rebounds.

It’s a quick turnaround for the Mavs who get a chance to rinse the bad taste of their 119-117 loss to San Antonio on Sunday out of their mouth. Having Porzingis in the lineup could help do that. He played in a recent back-to-back set scoring 23 points with 12 rebounds in a loss to Houston followed by another 26-17 double-double against the Bucks. It’s the first time in awhile he’s played on consecutive days.

The Mavs could use some secondary scoring to take pressure of Doncic. Despite being the focus of opponents, Doncic is still putting up MVP-type numbers. He’s scored at least 23 points in eight straight games and averages 28.5 for the season. Even with Luka filling it up the Mavs rank 19th averaging 111.6 points.

We have yet to see odds posted at the time of this writing with questions about both teams. Porzingis typically sits the second of a back-to-back, though he just recently played both ends last week. And Embiid is coming off a knee injury that cost him 10 games, so oddsmakers are being cautious. Though they lost earlier this season it’s hard to overlook the success Dallas has had. And I like Doncic to be dialed in after going just 2 of 8 from three-point range against the Spurs.

Check out the latest NBA odds.