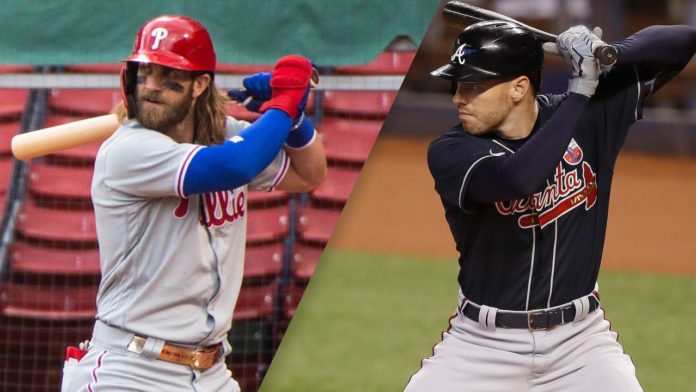 The NL East should be a dogfight this season and two teams expected to be at the top of the standings square off on ESPN Sunday Night Baseball when the Atlanta Braves host the Philadelphia Phillies. The preseason favorite to claim a fourth straight division title, the Braves got off to  a slow start dropping their first four games, including a three-game set in Philly where they scored a total of three runs. The Phils look to continue their hot start to the season. They followed their opening sweep of Atlanta by taking two of three from the Mets to enter the weekend tied with the best record in the National League.

The game between NL East rivals takes place on Sunday, April 11, at 7:08 p.m. ET from Truist Park in Cumberland, GA. The game will air live on ESPN.

Unlike last year when a four-game losing streak would have been deadly for a team’s chances of winning a division or qualifying for the postseason, we’re back to a normal 162-game slate that leaves some wiggle room to overcome such missteps. And every team will have them over the course of the summer. The teams that have the fewest will move ahead in October. We don’t expect the Braves to have a hard time scoring runs with their lineup. They were tight at the start of the year scoring just three times while getting swept in Philly with all three games cashing the UNDER.

Looking more like the team that finished second in the majors in scoring last season, the Braves busted out against Washington plating 14 runs in three games with a doubleheader sweep on Wednesday for their first wins of the season.

It’s obviously way too early in the season but the Phils cleared a big obstacle on the early season slate. Playing against NL East rivals, they took five of six from the Braves and Mets at home. Now they take to the road for the first time for seven games against the same two teams. The start couldn’t have been better, unless they won every game. The pitching has been strong and they are doing enough offensively thanks to Rhys Hoskins, who had seven extra base hits in the first six games.

Matt Moore is proof that the comeback trail is long and arduous. Out of the majors last season and with just two starts in 2019, Moore is looking to revive his career. He emerged as one of the top lefties in the majors in 2012 going 11-11 with a 3.81 ERA for Tampa Bay. The following season he was 17-4 with a 3.29 ERA though he only pitched 150.1 innings. Moore underwent Tommy John surgery early in the 2014 season and never fully regained the form that made him so dominant. He has only 25 wins in over his last eight seasons.

A strong season in Nippon Professional Baseball earned Moore a free agent contract with the Phils. He posted a 2.65 ERA and tossed seven no-hit innings in Game 3 of the 2020 Japan Series. Moore had a strong start in his Phillies debut retiring the first seven Mets batters before running into trouble. He lasted just 3.1 innings allowing four hits and two runs with four strikeouts in a game the Phillies eventually won 5-3. Now that the jitters of taking a big league mound are out of the way, Moore can rely on his crafty stuff against a free-swinging Atlanta lineup.

Having spent part of the 2019 season with the Phillies, Drew Smyly might have some insight on the lineup he’ll face on Sunday night. He started 12 games for Philly that year going 3-2 with a 4.45 ERA. It was the second of four different stops for the veteran lefty since the start of the 2019 campaign. Smyly has always been a serviceable pitcher working both as a starter and reliever.

Smyly is getting a chance to crack the rotation this season and had a solid debut surrendering four hits and two earned runs with eight strikeouts and one walk in 6.0 frames against the Nationals. He couldn’t protect a three-run lead and took a no-decision in a game the Braves eventually lost. He’s making his first career start against his former club.

The Braves were so good last year getting career seasons from Marcell Ozuna and Travis d’Arnaud, and an MVP from Freddie Freeman, that some regression was almost expected. They won’t be as bad as they were in the opening series, however. The bats came alive against Washington and they should continue to climb up the stat columns against Moore and a suspect Phillies bullpen.

We’re not looking at overpowering starters and while both bullpens have been strong in the early going there are still some question marks. The offense is starting to catch up so I’m leaning toward the OVER in this one. And the Braves are looking to exact some revenge after their season opening sweep.